On the streets this week, they held signs calling for businesses to opened back up–public health be damned. But behind closed virtual doors, they’re talking about getting armed.

“Time to form a militia!” Matthew Hinrichs wrote on a closed Facebook group planning the “ReOpen California” protests across the state on May 1st.

LCRW received a small trove of messages from a private group called “Reopen California” on Facebook with 98,200 members and a linked private group on the lesser-known social network MeWe with 732 members. MeWe, founded in 2012, touts itself as a privacy-oriented alternative to Facebook and claims it has over 4 million users.

One demonstration shared in the private groups is the “Liberate Long Beach” event. It has a banner with the III% militia movement logo on it. The III% movement formed largely as a reaction to Obama’s presidency. Though not explicitly white supremacist, ‘threepers’ have repeatedly targeted Muslims for attack including firebombing a mosque. III% groups also stood with white supremacists at Unite the Right, only disavowing them afterwards.

Minor conservative media figure Jesus Cisneros, who ran for Long Beach City Council in March and goes by “The Right Latino” on Instagram, is promoting the event in Long Beach and plans to be there. It’s unclear who’s actually putting the rally on. Long Beach’s mayor asked people to stay home but the city government doesn’t seem to be getting in their way.

Louren Khanty, who apparently was a campaign worker for former State Assemblyman Travis Allen, was part of the MeWe group. LCRW has previously photographed Travis Allen with members of the Proud Boys. In 2017 he appeared on a panel with Kyle Chapman, aka ‘Based Stickman,’ the founder of the Proud Boys’ now-defunct paramilitary arm, the Fraternal Order of Alt-Knights.

The social media groups planning these events are deeply conspiratorial. One MeWe post sent to LCRW showed California Governor Gavin Newsom’s Twitter profile, which the poster claimed had a “pedophile symbol” on it. Right-wing conspiracy theories like PizzaGate and the cultish QAnon movement are premised on the world being run by a shadowy cabal whose leaders, including top politicians and media figures, ritualistically abuse children. These conspiracies have lead believers to commit multiple acts of violence including at least one murder.

“I wish they would stop this flu shot crap. I will NEvER [sic] submit to a shot,” Cheryl Hanhart-Beck wrote.

One poster shared a meme on MeWe comparing people being urged to stay at home to slow the spread of COVID-19 to being loaded on the trains to concentration camps. It got six likes, one bullseye emoji and an angry face reaction. 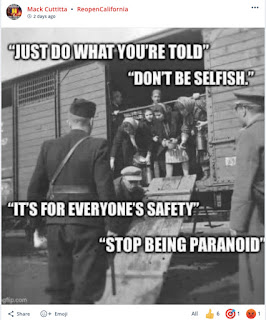 Some on the MeWe group asked if antifascists had infiltrated the Facebook group. They talked about the thinly-veiled anti-Semitic conspiracy that Jewish billionaire George Soros is paying antifascists to protest against them. 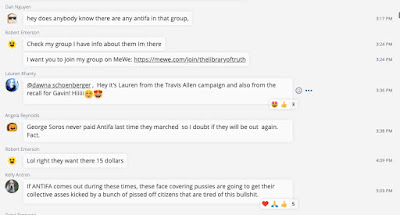 “If ANTIFA comes out during these times, these face covering pussies are going to get their collective asses kicked by a bunch of pissed off citizens that are tired of this bullshit,” Kelly Antrim wrote. 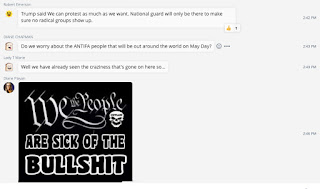 Others wondered if “ANTIFA” would be out in force because of May Day–historically an important day for leftist mobilization. It’s unclear whether any events will overlap with various leftist groups' calls for a general strike and rent strike on May 1st.

One poster on the MeWe community is a company called Patriot Shit Outfitters. One example of “Patriot Shit” they advertised to rallygoers and organizers was a “Cold Rolled steal [sic] spike” hidden in a Sharpie on their page. It’s available for $12.99 on their website. Other “Patriot Shit” on the website includes one that combines the U.S. flag, the III% logo and the confederate flag. It also comes in camo.

Users of the “ReOpen California” group adopted MeWe largely because they anticipated Facebook shutting them down. Facebook has removed some, though not all, anti-quarantine events. Facebook has a long history of allowing white supremacists, conspiracy theorists and antivaxxers to proliferate on their platform. As of this writing, the “Reopen California” group is still up on Facebook, though members claim some of their posts have been removed by moderators for “spreading disinformation.”

Many of the anti-quarantine protests are being attended by extremist groups like the Proud Boys. Some of these protests were funded by dark money groups including one linked to Education Secretary Betsy DeVos. They’re also being cheered on by President Trump. The Huffington Post found that many of the protests “have been organized or attended by white nationalists, conspiracy theorists, anti-government militias, members of a neo-fascist street gang, and other assorted extremists and scam artists.”

In addition, much of the online activity around these protests is being amplified and driven by botnets. According to Business Insider, “An analysis from Bot Sentinel, a bot tracking platform, found that bots and trolls have been stoking sentiments online that have fueled the protests, using hashtags like #ReopenAmericaNow and #StopTheMadness.”

Brooke Binkowski, managing editor at Truth or Fiction and former managing editor at Snopes, told Business Insider the protests are “completely inauthentic and coordinated” and said foreign state actors are likely stoking the flames of the movement.

After reviewing livestreams of anti-quarantine events this week, LCRW has found that many of those publicizing the protests on the West Coast are part of a highly active and organized network of right-wing extremist media figures that have been promoting right-wing rallies for years. Examples include Christian supremacist AM radio host Ben Bergquam and Washington III% leader Matt Marshall. In other words, the same people who always help promote and bring the far-right out into the public are the ones showing up now.

As of this writing, the MeWe “Reopen California” group is involved in planning at least eleven anti-quarantine protests across the state, mostly in coastal Southern California. Five of them are scheduled for Friday, May 1st in L.A., Sacramento, San Bernardino and Orange Counties and in San Diego. 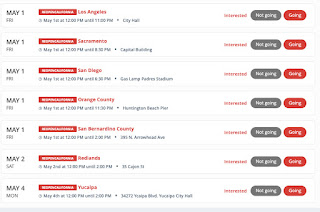 “It’s going to have to be simultaneous OPERATION GRIDLOCKS at numerous locations to dilute their ability to respond,” Tracy Burns wrote in the MeWe group. 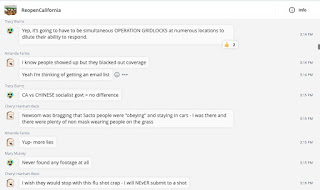 The consequences of this wave of protests may already be showing. Kentucky saw a spike in COVID-19 cases after the rallies hit the state. But right-wingers have been told constantly for months that the virus is either a complete hoax or that it’s drastically exaggerated to make Trump look bad. Even when they acknowledge the danger, their rhetoric often puts restarting the economy above their own and collective safety. There has been at least one major incident of violence at an anti-quarantine protest, when a man pulled a knife on a reporter in Huntington Beach on the 17th.

Take, for example, Joey Gibson, leader of the violent, cultish protest group Patriot Prayer, said to a crowd of about 80 in Boise, Idaho yesterday.

Gibson didn’t make clear what those “real sacrifices” might be, but he and other extremists are making clear that for them and their followers, nothing is off the table.