The flyers were hand-written. One left on a San Leandro resident’s door read “If you are a woman or man born in another country go back, return immediatly [sic]” and if you’re a woman “takes [sic] your children with you.” 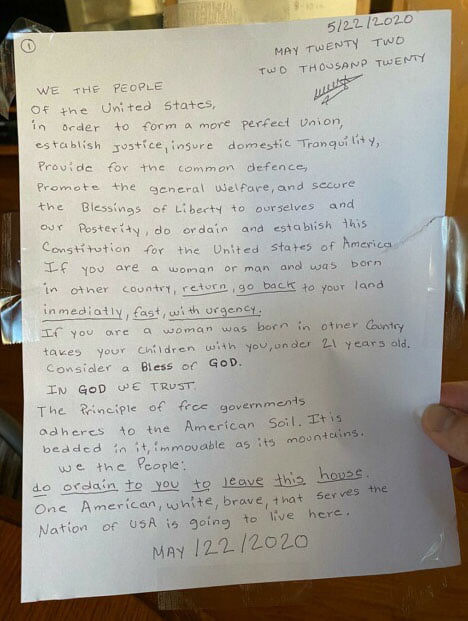 “Arechiga was booked into Alameda County’s Santa Rita Jail in Dublin. However, due to the current state bail schedule, she has been cited and released from custody,” SLPD wrote in a Nixle alert.

“This occurred in a quiet and well diverse middle-class community in San Leandro. My family’s house was also targeted. We were able to capture all this on camera,” Trinny Wynn wrote on Facebook Friday around 5:30pm. Wynn had the flyers stuck on her door as well.

“There is no room for this hateful and despicable behavior in this society,” Wynn added."

San Leandro has a history as a whites-only community in the East Bay. In 1960, it’s population was 99.4% white. I’ve heard locals refer to it as “Klan Leandro.” In the 70s, Newsweek and CBS included the city in reports about white enclaves. The U.S. Commission on Civil Rights even had a hearing on why the town had such a disproportionately white population in the late ’60s.

Actor Brian Copeland, who lived in San Leandro during his childhood in the 70s, recounted growing up black there in his one-man play “Not a Genuine Black Man.”

“You assimilate. You talk like your friends. You don’t want to stick out but you’re different–even though you’re trying not to be different.” Copeland told KPIX CBS Bay Area in 2017. 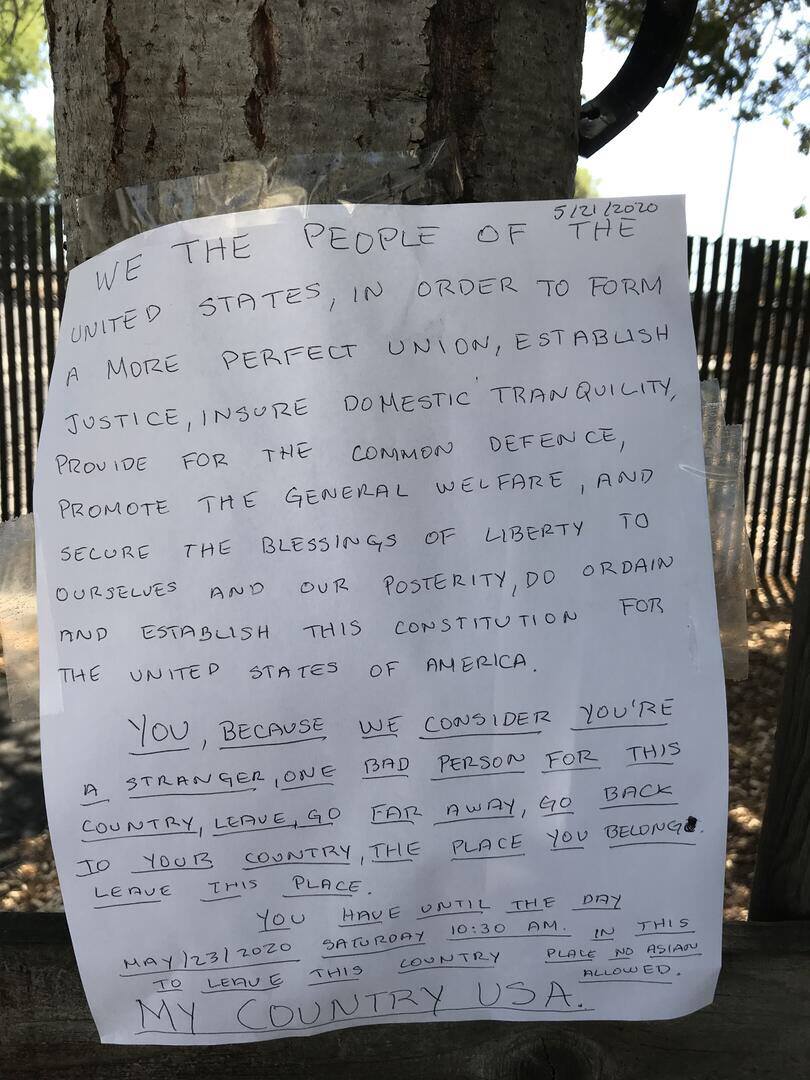 Police said they found a similar racist message Thursday on the Heron Bay Trail near the neighborhood. It read in part “no Asian allowed.”

Hate crimes and racist incidents against Asian people, particularly South-East and East Asian people, have skyrocketed in the wake of COVID19, arguably due to right wing media and the Trump administration’s insistence on blaming China for the virus and widespread conspiracies including one that the virus is a Chinese bioweapon–a theory promoted by everyone from the QAnon conspiracy cult to the President.

San Leandro, according to the last census, is down to about 37% of the population being white. About 10% of people there are black, 27% are Hispanic/Latino, and about 35% are Asian–the second largest category by population in the city.