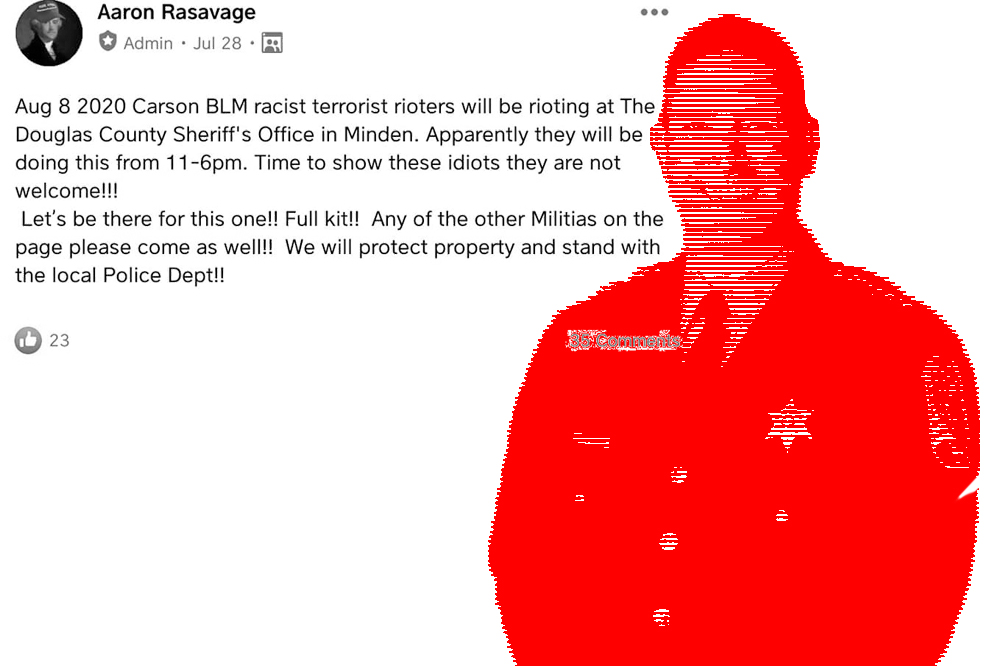 “The Douglas County Public Library denounces all acts of racism, violence and disregard for human rights. We support #BlackLivesMatter,” the statement reads in part.

“Due to your support of Black Lives Matter and the obvious lack of support or trust with the Douglas County Sheriff’s Office, please do not feel the need to call 911 for help. I wish you good luck with disturbances and lewd behavior,” Sheriff Daniel J. Coverley said in a letter to the library’s board of trustees.

A spokesperson for Douglas County, which sits east of Lake Tahoe and south of Carson City right off the 395, told the Reno Gazette Journal that Sheriff’s deputies would still answer calls. The message from law enforcement, however, was clear and outraged locals. Black Lives Matter of Carson City organizers planned a demonstration for tomorrow in front of the Sheriff’s Office in Minden.

“You DAN COVERLEY TOOK AN OATH TO THE CONSTITUTION AND SWORE THAT YOU WOULD DEFEND AND PROTECT THAT CONSTITUTION NOW YOU HAVE GONE AGAINST THAT! We will be there on AUGUST 8th to fight for that and exercise our constitutional rights! BECAUSE THATS WHAT TRUE AMERICANS DO!” BLM of Carson City said on their event page.

The event is attracting local right wing militias. A post on The Real City of Reno, Nv. shares screenshots from a Facebook group administered by Aaron Rasavage of nearby Gardnerville, NV. LCRW has not yet identified the name of the group, but there is a Northern Nevada Militia private Facebook Group Rasavage and others mentioned in the screenshots are part of. Rasavage’s Facebook indicates support for the Battle Born III%ers and a QAnon page. His group intends to confront BLM protesters in front of the Sheriff’s Office.

In the posts he claims Douglas County Sheriffs organized a meeting for the militiamen tonight at 6:30pm in Lampe Park in Gardnerville. In the post he said he’d set up a recreational vehicle as a command center and pass out bracelets to indicate who’s a member of the Northern Nevada Militia. In another post, he also said the group is planning to incorporate as a nonprofit and said “Anyone interested in becoming an Officer in the Northern Nevada Militia, please respond with a “Yes.””

Another group admin said that “boggies have touch down in Minden” and that “Games might start early, ladies and gentlemen. Get ready for nite ops.”

The group’s “nite ops” appear to be finding cars with out-of-state plates to slap Trump bumper stickers on and slash the tires of.

“I think the air needs to be liberated from those tires,” writes Ross Jackson. “Maybe battery cables need to be freed as well.”

“We declined due to lack of organization. No National Lawyers' Guild, no medics, no exit plan. Also, as a gun club from Reno, we are total outsiders in that community and if we showed up heavily armed, we’d escalate the tension,” a TMJBGC representative told LCRW.

As a full disclosure, LCRW staff have benefit from firearms training from the TMJBGC.

In a letter re-posted to the TMJBGC’s website, a representative from the Reno/Sparks chapter of Black Lives Matter urged organizers of the Douglas County event to postpone and plan a much safer event in the future.

“Understand that the “free speech zone” set up by the DCSO is not the only place where counter-protesters will be congregating. A safety meeting hosted by the Douglas County Sheriff’s Office was attended by three times more committed, armed, racist militia than BLM supporters who responded to the Facebook event. The entire town of Minden is now under the watchful eye of this self-described militia that is now on high alert for any BLM supporters; the DCSO has altered their operations in order to be more vigilant in targeting protesters. There will, in effect, be no safe space for your voices to be heard.” the letter reads.

The event, as of this writing, appears to be going forward as planned.