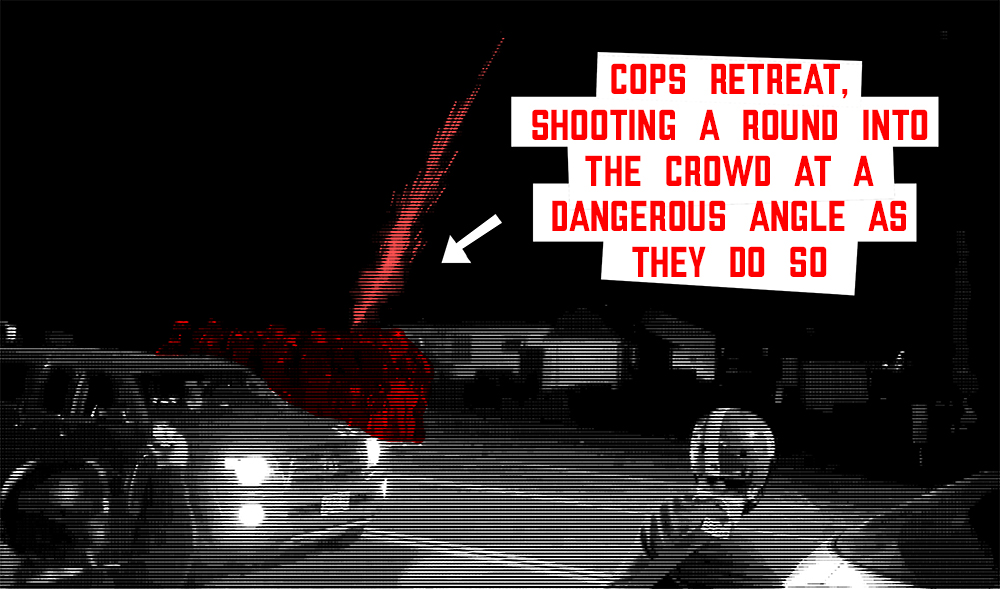 EDITOR'S NOTE : TJ Partridge is a Portland-based journalist who plans to cover ongoing issues in the city for LCRW. You can help pay for his hard work on CashApp here and Venmo at the address @LABreaux. We’re trying to raise $350 to pay him for this article and his live coverage last night.

On the heels of a night wherein the Portland Police Bureau beat, flashbanged, and gassed a crowd through the streets of outer Southeast Portland, the teenage-led activist group Youth Liberation Front posted a follow up call to action in the East Portland neighborhood. The announcement, of course, was not unnoticed by the Portland Police Bureau, whose official Twitter account stated unequivocally that “this call for direct action… will not go unanswered,” and that it “[meant] there [was] intent to engage in violent actions.” The interaction would prove to influence both fear in protesters’ minds and anger in the actions of the PPB officers later in the evening.

This call for direct action for “round 2” in East Precinct will not go unanswered. This announcement means there is intent to engage in violent acts like we saw last night where attempts were made to burn an occupied building and people in vehicles tried to run over officers. pic.twitter.com/ulIYrnWzKR

As many protest nights in Portland do, this night began with a smaller group convening in a park with music and mutual aid groups handing out food and water. The planned 9 pm time to begin marching even waited until 9:45 pm to mobilize, though press and a few protesters were focused on the precinct before then. Within 5 minutes of the march arriving at the precinct, an unlawful assembly was called. Within 15, the front of the building was splashed in paint and a fire was started.

Though the first orders to disperse went out quickly, at least four total warnings were given prior to their 10:21 pm push. Police’s first push was as violent as anticipated: batons and floodlights backed up the shouts of cops as they (often physically) pushed protesters through the adjoining parking lot of Floyd Light Middle School in the dark. Here is where the menace from police became quite clear: not only were cops assaulting of protesters as usual, but they were physically and verbally haranguing legal observers and press despite both groups complying with police orders. LCRW heard a cop tell a member of the media “Nice press hard hat, dickhead. Real professional,” then pivot to threatening to arrest members of the National Lawyers Guild. It was also during this point that the ever-popular Snack Van once again had all its tires slashed. The van’s operators weren’t allowed to have a tow truck come assist them due to the street closure.

A few blocks away from this confrontation, riot lines were pushing protesters into residential housing down SE Washington Street. Police used smoke canisters for cover and dispersal for a few violent confrontations. A fleet of motorcycle cops swept through the street and made arrests. Following this, police made a hasty retreat and shot more smoke directly into the crowd from a high angle.

And the cops retreat, shooting a round into the crowd at a dangerous angle as they do so. pic.twitter.com/PzFbsmHQjx

Undeterred, the march went right back to where they began. This led to a second push, this time involving large numbers of both PPB and Oregon State Police Troopers. This dispersal proved to set the tone of terror the police would hold the rest of the evening. Police pushed the protest several blocks into more suburban housing, causing at least one car accident along the way when a PPB cruiser pulled down a street with traffic stopped behind their riot line. In the confusion, two civilian cars collided, one driver rear ending the other.

From here, police pushed several smaller groups around neighborhoods and against businesses. At one point they cornered around 40 protesters behind a Target in the area and then menaced press recording their push out of the parking lot. As they’ve done before, police attacked a wagon handing out water and medical supplies. According to several folks associated with mutual aid group The Witches PDX, officers justified this action by alleging that handing out water constituted providing weapons to protesters.

These cars are just yelling at folks in a Target parking lot. Your tax dollars at work, Portland! pic.twitter.com/ZfrG9AjacZ

For the rest of the evening, the Portland Police Bureau spent their time repeating their violent pushes and making useless shows of force that protesters mocked endlessly. Police motorcycles blocked whole streets to slowly follow protesters, circling a 3 block radius repeatedly with floodlights and sirens on, and shouting at press or protesters when they felt testy. During one of these pushes, local reporter Griffin Malone caught an officer harassing a disabled protester who wasn’t moving fast enough for the cop.

“I’m disabled! I’m going as fast as I can,” the protester yelled.

“You shouldn’t have come here, then!” the officer replied.

This officer got angry someone wasn't moving fast enough so decided to push and shove him. Someone else yelled "im disabled im going as fast as I can" and the officer said "you shouldn't have come here then" pic.twitter.com/iQGeRfUunB

One new tactic used by the police: citing city code to close a street. The code in question, Portland City Code 14C.30.010, was quoted several times as including press as subject to arrest, despite section E of this very law stating that press must be given reasonable access to the area in question. Using this already misquoted statute, the cops repeatedly used this as justification for several more violent pushes, including one that ended in the arrest of a member of the media that was allegedly shoved into an officer by another officer. This would be the tone that waited out the end of the night.

In all, this was an evening of violence that was promised and delivered at the hands of a police force that was all too willing to terrorize protesters in an attempt to cool free speech, a move we here in Portland are all too familiar with–and have yet to be deterred by.