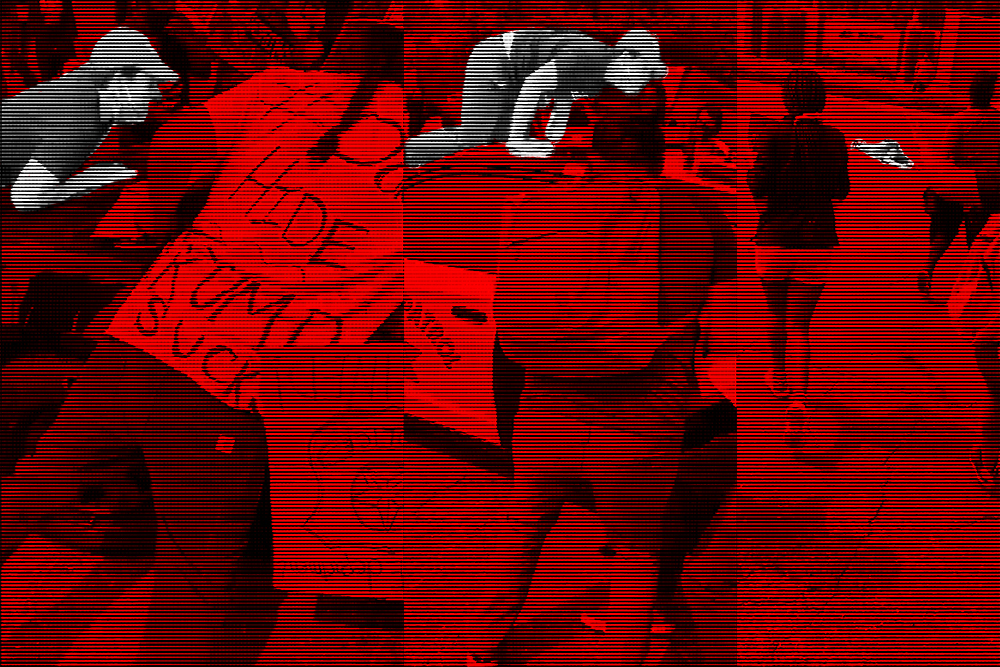 On Monday, Trump came to Sacramento in between campaign events to be briefed on the massive wildfires happening across the West Coast and hold a press conference. His supporters and counter-protestors both showed up outside Sacramento McClellan Airport where he landed. At least Three civilian drivers and one highway patrolman used their vehicles to attack anti-racist counter-protestors. At least two people left in ambulances.

LCRW spoke to “Dee,” who was struck by one of the car attackers and witnessed the attack by a CHP officer firsthand. Dee is a member of the Northern California affiliate of the Youth Liberation Front–a nationwide network of anti-fascist youth activists, although they didn’t claim to speak as a representative of the group. YLF members are mainly minors and are constantly targeted by fascist propagandists like Andy Ngo and Tucker Carlson. Because YLF members regularly receive death threats, LCRW has a blanket policy of granting them anonymity for interviews.

“We were there to counter Donald Trump’s campaign stop and press conference at McClellan Airport,” Dee said. They recalled that Trump supporters were out in numbers and the atmosphere was tense. “No Trump supporters really had it in them to instigate a fight,” they recalled.

“It was typical Trump supporter shit in regards to their speech. They were mostly circling in lifted pickup trucks and off-road vehicles with massive flags and their plates hidden,” Dee recalled. A comrade of Dee’s who asked not to be named told LCRW they saw “a woman calling a black woman anti-racist protester the n word with a hard ‘r.’”

The first car attack happened at the corner of Dudley Avenue and the entrance to the McClellan Airport parking lot. Dee was standing around on the sidewalk and in the bike lane with a few other anti-racist protesters.

“The vibe was fairly chill–think typical liberal Biden/Harris rally,” Dee recounted. They said most of the protesters were on the sidewalk. YG and Nipsey Hustle’s ‘Fuck Donald Trump’ was playing.

“It was mostly a moment to regroup and rest on the sidewalk in the shade before marching back to the park,” Dee recounted.

“As were chanting, the Volvo pulls up next the crowd, when a few protesters start interacting with the driver, chanting, yelling, etc,” Dee said. “The Volvo was the first car to approach us that day.”

“Definitely took me by surprise in regards to aesthetics lol,” Dee told LCRW via text. “Not as flagrant and obviously fash as the Trump lifted trucks.”

Video shows that the driver suddenly floored it and rammed into protesters a few feet away, including Dee, before speeding off.

“Getting hit felt incredibly surreal. You watch video after video of protesters getting injured, and some killed (Rest in Power Summer Taylor), yet it still doesn’t feel real until your legs are about to go over or under this car right in front of you,” Dee said.

“Injuries were minor but the intent was obvious and could’ve been much worse,” Dee said. “It was definitely not surprising seeing as that’s been the main method of right wing violence this whole summer during the George Floyd uprisings.” In July, the count was at over 60 car attacks nationwide for such attacks.

“The most offensive thing to me both in the moment and now was the clear intent. The driver obviously wanted to hurt myself and the comrade beside me. We all know the political climate in America is fully fascistic at this point, but for me as a kid in this movement experiencing it for the first time was a gut check,” Dee reflected.

Dee says they weren’t “really all there” for the next two attacks because they came quickly after the first. One attack was ten minutes after the Volvo. A red Ford Explorer “wouldn’t turn around when we had blockaded the entirety of Dudley Avenue.” Protesters tried to surround the Explorer and the driver floored it, ramming into people, severely injuring at least one. Someone called 911 and an ambulance came for the victim shortly after.

“Honestly the only thing going through my head was ‘How the fuck are people this evil to do this shit twice in such a short time?’ I always envisioned it as a one-time thing and that was a huge fucking deal, but to have it happen again was just horrifying,” Dee reflected.

“The other was a red F-150 that floored out of a parking lot while we were marching,” Dee said. LCRW was unable to determine if anyone was injured in this attack and is seeking further accounts and documentation.

“All I was thinking was ‘how much more evidence does the general public need that these people are deranged violent lunatics intent on ending human life?’” Dee reflected.

Dee says things were going well right before the attack by the CHP officer.

“We had gotten away with taking Trump flags and were hella hydrated. Protesters had taken the side of Watt Avenue at this point closer to the park and were shutting down traffic one way,” Dee recalled.

They said for about half an hour people hung out by the park like this–“music, water, merch table in the park. Good vibes.” There were some Trump supporters and CHP circling in their vehicles, but they weren’t being too aggressive. Then two CHP Dodge Chargers drove down the

intersection that protesters were blocking. Protesters tried to block the cruiser on the right, which was getting really close to them. Then the cop lurched forward.

“At this moment, a comrade, clearly fearing being run over and killed, attempts to surf on the hood of the car instead of going under,” Dee recalled.

The protester tried to get off the roof of the cruiser while the cop floored it. The protester fell off and couldn’t move. Sacramento Street Medics were on the scene within seconds getting them on a stretcher and out of the road.

CHP, meanwhile, set up a perimeter with ten cars on Airbase Road. They played their sirens simultaneously. The police told protesters that if any of them “were in the roadway at all, they would tell EMTs to turn around.”

“Did you just say it’s not that urgent–the person that the cop just hit?” a videographer with the Instagram account @sacsocialjusticeevents said after the attack in a video on their feed.

“Do you guys wanna disperse so they can get through?” a CHP officer apparently named Telly or Tully with badge 15869 responds.

“We’re not blocking anything!” the videographer shouts. “So what needs to happen? You guys are blocking the road! You won’t let an ambulance through until we disperse? Are you saying that?”

Another demonstrator hospitalized.
From our vantage point these injuries involve a CHP unit.
CHP car sped off and at least two demonstrators were injured.
This is the third vehicle that’s come into contact with demonstrators on foot that we’ve witnessed.
Stay w. @kcranews pic.twitter.com/xSebFqREFx

Later in the video the videographer says four cars ran people down during the day and that the fifth “was a fucking cop car,” though Dee recounted four. NBC Bay Area’s Vicki Gonzales counted at least three.

In another video by @sacsocialjusticeevents, an officer named Dutton claims the protesters are the ones blocking the road while the video clearly shows multiple police vehicles blocking it.

“I actually want to know what the policy is for CHP that states when you’re allowed to hit people with your car–cause you guys don’t know it?” the videographer asks.

“It should be never unless you’re in fear for your life so then–” the videographer says.

“Okay, so it probably is never, right?” Dutton responds.

Dee says it took half an hour to get an ambulance for the person run over by CHP while it took less than five for EMTs to get to the person attacked by the red Ford Explorer.

“Seeing a police vehicle do the exact same thing that fascists had done earlier in the day totally broke the notion in my head that state fascists were somehow marginally better than street fascists,” Dee said. “Now I realize that they’re worse, because although the Trump supporters may be slightly more deranged and less composed, and attack more often, the police have infinite protection under all political parties in America.”

Dee left LCRW with this reflection on the day:

“Speaking for myself, it was intense and made me feel simultaneously more hopeful than ever and even more scared than I’ve ever been for the future. As kids we don’t really have the option of just giving up and riding off on a horse of mediocrity and half-baked solutions like some people want us to believe. Being specific though, it made me feel incredibly powerful that we could show up and show out in a place with such a high density of Nazis and associated fascists and prove that it can and should be done. It’s way less about my immediate interaction with the hood of a Volvo and way more about how the fuck do we make it so we collectively won’t have to breathe poisoned air for weeks on end every year, have friends and family die from pandemics and wildfires, and stop wasting our lives at jobs that contribute to all of these problems.”

LCRW is seeking more firsthand accounts of these attacks. If you were there, please reach out to leftcoastrightwatch@protonmail.com. We can guarantee your anonymity.