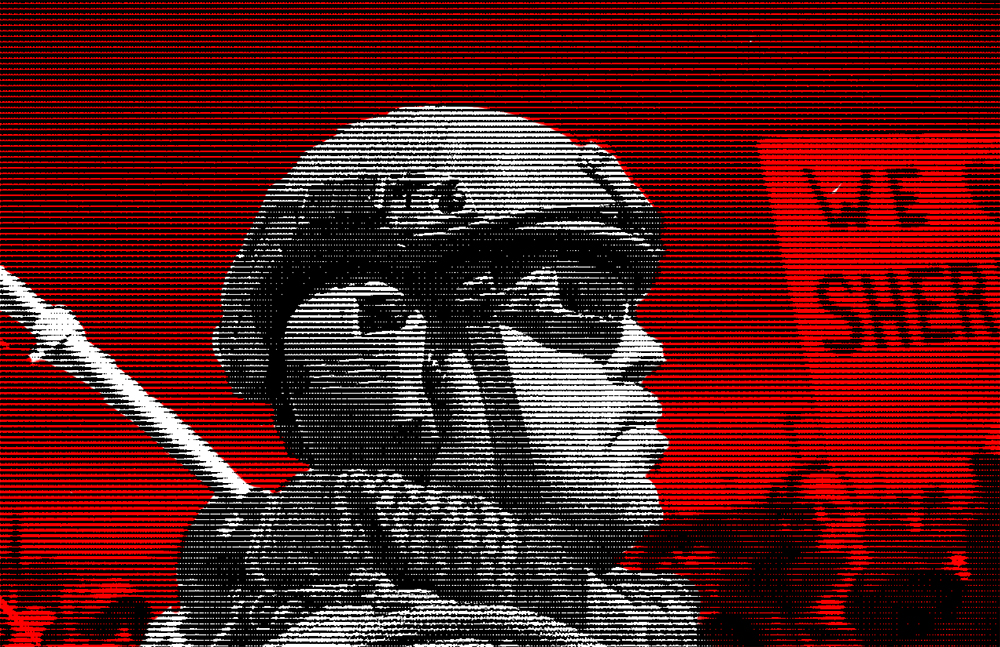 EDITOR'S NOTE : Chris and JJ both use They/Them pronouns. They both write for the IWW News Zine The Reno Worker, where this story first ran. JJ is a freelance photojournalist and a research intern at the Electronic Frontier Foundation (EFF). Chris is a freelance journalist and a professional wrestler. Chris Torres' Cashapp is $headbutted and JJ’s is $JJMazzucotelli.

On August 10th Mass Liberation published a press release which claimed that Douglas County Sheriff was working with Local far-right militias to respond to a planned local Black Lives Matter (BLM) rally. In an article published the same day reporters working for the RW noted that “militia members were spotted throughout the grounds providing unofficial security aid to the Douglas County Sheriff’s Office. Some of those who were present could be identified by patches. Militias that were present included the 3% Militia, the Northern Nevada Militia, as well some members of the Boogaloo Movement.”

The Armed Conflict Location & Event Data Project (ACLED) identified these same militias as likely to work with Law Enforcement. The report notes that they usually define their operations in terms of protecting public and private property and “they often see police and the US military as allies, their implicit goals overlap with preserving the long-term dominant culture of the US, largely perceived as traditionally pro-white and patriarchal systems of production and governance.”

The Electronic Frontier Foundation (EFF) recovered an email from Ron Elges, a member of the Douglas County Sheriff’s Office that claimed that a member of a local militia was working with the Sheriff to provide security to a Trump rally on September 12th. The email claimed the individual was patrolling the “Minden-Tahoe Airport” and arrested people. The full email is transcribed below.

_On September 12, 2020 at approximately 0700, I received a call from \[Redacted\] stated he was local militia and has been securing the perimeter outside the Minden-Tahoe Airport. He stated they have spotted several individuals camping out and have arrested a few subjects. \[Redacted\] is in communication with with Douglas SO. \[Redacted\] received my phone number from the airport office and called in regards to enforcing the parking lot. He wanted to know if he should be denying people access to the parking lot._

When Ron Elges was contacted in an additional FOIA request, he denied that this, or any further emails existed.

The Power Liberation Movement (PLM) is a group of young activists based out of Nevada’s capital, Carson City. They were willing to talk about their experiences with local militias working with police, specifically when the small town of Minden was gearing up for the BLM protest on August 8th.

“For myself, I was nervous just because I wasn’t sure what to expect. We’ve seen the numbers on Facebook, but like you know, we’re from the smaller parts of Nevada. So we didn’t think we’d have a protest that would turn up the way that Minden did,” said Engageante Jackson of PLM.

He elaborated on this saying, “We had a connection of ours attended a kind of ‘pre-meeting’ that the town had. We got some insight what the rundown was gonna be. The police said that they’re going to leave the militias up to crowd control, apparently, and that was gonna be the way they handled that.”

The group feared that this meant the police would not intervene in any instance of violence.

Hollon added, “Driving around the Minden Park area, it seemed like half the people there had ARs alone. It was ridiculous and it definitely felt like you were driving in an area of just a waiting gun fight. It was very interesting. Luckily nothing happened, but entering in it was like, ’When is a shot gonna go off?’”

“I was scared I was gonna be an easy target because Minden doesn’t have a large Black population and the Black people that were there, they were supporting Trump and All Lives Matter and the Right-side.” Jackson recounted

Lauren Brien-Wooster, another member of PLM added, “I have to say that the beginning part when we were just on the street wasn’t as bad. We’re used to talking to people who disagree with us at our regular Carson protests. It was just like a really intense version of that with no personal space. I didn’t get full on scared until they started to drive us out and separate us and at that point my goal was just to keep the group together and especially the younger people with us.”

The group didn’t feel the situation reached its tipping point until the group was completely surrounded and members were becoming separated from one another.

BLM protestors initially made the decision to pack up their supplies and leave Minden as they became overwhelmed. However the group decided to stay afterall, but not in place. Protestors made marched through a neighborhood closeby.

Police at this point had only a small presence compared to that of the militias. Police officers would arrive only briefly when the crowd size would increase beyond sidewalk capacity and people would step onto people’s property or onto the street.

Yet, militia members were always present and nearby, brandishing rifles and making it very clear that BLM protestors and supporters were not welcome.Militia members followed BLM protestors during their march, police only appeared twice in an armored vehicle to separate the crowds, opting to not directly intervene.During the march, a driver attempted to shove protestors with their truck and another protestor was assaulted briefly after this. Police did nothing in response to these incidents.

Shortly after, Power Liberation Movement and other BLM supporters made the decision to leave.

“I think our group was just trying to make sure we all got out of there safe. We weren’t really focused on protesting anymore at that point, we were just worried about making sure everybody was gonna be safe. We couldn’t even walk to our own cars without having to be followed and harassed,” said Jackson.

Following the events of the Minden protest turned pro-police rally, members of Power Liberation Movement met with the organizer of the pro-police counter-protest.

Hollon stated, “It was just a couple of us that were there to ask questions, get to know each other kind of a thing — realize that things were bad that day kind of a thing. And he fully understood that. Once it happened, he kind of regretted doing the whole thing. He said that around 1pm, he was sitting out by [Carson Valley Inn] by himself and just contemplating everything while the other organizer of the [counter] protest was still hyping up people. He was regretful of the whole thing in general, he didn’t expect it to be so openly against us as much as he wanted to be openly for the sheriff.”

Brien-Wooster added, “I don’t feel like we should give this person any credence for thinking it was wrong. Unless you did anything, you’re just as bad as everybody who was persecuting us.”

Jackson continued, “There was another dude out there that was displayed and it looked like he was yelling, but he was actually trying to help us. But if there’s only a few people trying to do it, out of a majority of people who are going against what’s right and you’re still supporting that group, then you’re wrong. That was the problem out there. You could have one or two good people, but you’re still supporting an ideology that’s not beneficial to people who don’t look like you.”