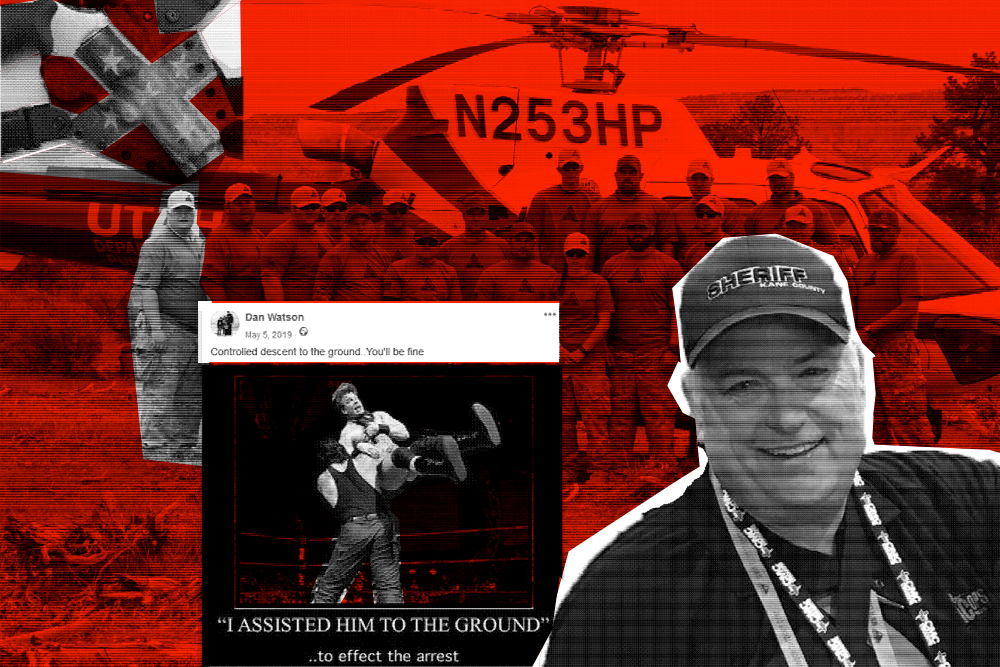 In May of 2014 Dan Watson of Kanab, Utah posted a photograph on his personal Facebook page of a line of armed men silhouetted against a sunset. The man at the far right of the photo holds the leash of a dog – probably a German Shepherd. Overlaid on the photo are the words “There is no hunting like the hunting of man, and those who have hunted armed men long enough and liked it, never care for anything else thereafter.” A comment left by another Facebook user reads, “thank you bro for the service you give all of us.”

Watson is a longtime employee of the Kane County (Utah) Sheriff’s Office. When he posted the photo with the Hemingway quote on Facebook, he had just finished teaching at KCSO’s annual backcountry Tactical Tracking Class, “developed specifically for law enforcement agencies.” The course materials from 2014 boast that alumni include “students from the US Marshal’s Office, DEA, FBI, US Border Patrol, BIA Law Enforcement, National Park Service, and numerous state, county & local agencies from Arizona, Utah, California, Nevada, Texas & Colorado.” The website for the program shows photographs of participants going back to 2004. They appear to have trained more than 400 state, federal, and local law enforcement officers since the program’s inception. In 2014, the year Watson posted the hunting quote on Facebook, he was listed as the contact point for those interested in enrolling in the class.

Watson appears to have continued his involvement with the program through at least 2018. As of July 2020, his resume at Linkedin lists his occupation as “Kane County Sheriff’s Office Detective, LEO Trainer.” Public records show that Kane County paid Watson $96,841.62 in combined wages and benefits in 2020. The photo he posted in 2014 is currently featured at the website for the KCSO tracking class, with an American flag substituted for the sunset in the background – but without the Hemingway quote.

Between 2014 and 2020, Watson continued posting intermittently to his Facebook page. In 2015 he posted content mocking black protesters against police brutality.

In 2015 as well, he dressed up in an orientalist caricature of Osama Bin Laden, complete with a fake beard and a red paint bullet wound through his head.

In 2019, he joked about roughing up suspects while arresting them.

By 2018 he had also started a business, Alaris Tactical, making and selling custom gun holsters. The Alaris gallery shows holsters with various graphic designs including snakeskin patterns, Punisher skulls, US military emblems, and a Confederate flag.

In the summer of 2020, as protests against police brutality swept the nation in the wake of George Floyd’s murder, Watson’s casually snarky racism finally spilled over onto other Facebook pages. On July 2, a user posted in the “Kanab/Fredonia Rant & Rave” Facebook group.

“Yeah, I’m wondering why is there a Black Lives Matter protest in Kanab? First off there is no black people here for you to defend & if there was, I don’t think anybody would have a problem with them because Kanab is a friendly & peaceful town.. Love it! And the police here are peaceful & good people too! So you see there is no reason to protest here…” the user’s post reads.

Even as the thread rapidly devolves into a full Bingo card worth of racist tropes, Watson’s comments stand out. He describes Black Lives Matter as “an anti-police, anti-white, racist hate group” and declares “If your[sic] holding a BLM sign you are anti-police all police, including local police.” Even more disturbing, he appears to excuse the murder of George Floyd, telling one of the other users, “I watched the George Floyd video, I am pretty sure I know more about police tactics than you. […] You saw a white corrupt cop kill an innocent black man..I saw a cop kill a criminal.”

The Facebook thread is a microcosm of real-world tension in Kanab between long-time residents, whose politics are overwhelmingly conservative, and “outsiders” who bring in jobs and money, but are more liberal politically. When Best Friends, a local animal sanctuary, bought a parcel of state trust land in order to protect their water supply, some Kanab residents opposed the sale, even though the contract terms would preserve the rights and uses the residents were ostensibly concerned about. One opponent, who was quoted in the Salt Lake Tribune, admitted that her suspicions about the deal were based on a feeling that Best Friends didn’t respect local “values and traditions.” The “outsiders” at the animal sanctuary have been in Kanab for 36 years, employ 425 people in a town of 4,931, and the sanctuary attracts as many as 37,000 visitors a year to a place with little else in the way of industry.

With a population density of 2 people per square mile, what Kane County mostly has is a lot of open space. It also has a population that is overwhelmingly white. The state of Utah as a whole is estimated to be 86.1% white; Kane County is estimated at 94.7% white, with a Black population at 0.8% according to the Census Bureau. In a county with a total population of 7,886, 0.8% of the population is about 63 people. Hispanic or Latino residents are the largest minority group represented in census figures at 4.7%. And in spite of the Facebook post’s rosy description of Kanab as “friendly,” some of the comments in that thread – which has since been deleted from Facebook – reflect a very different experience for people of color. An archived copy of the page shows several comments from users who had heard residents use racial slurs or make derogatory comments about black or brown people. One user posted that she had gone to a local bar with a black friend, but left after one of the other patrons demanded to know “what’s this black boy doing around here?”

Watson’s response to this story was “I call bull****.” [asterisks added] To a woman who had overheard derogatory comments about Mexicans in Kanab, he suggested that she was being overly sensitive – “Your perception of ‘derogatory’ might be different than others” – and added that since they weren’t talking about her, she shouldn’t have been offended anyway. He then concluded, “You were offended because they had a different opinion about immigration than you.”

The Fredonia/Kanab Facebook thread also provides an example of the larger problem around people like Dan Watson. In response to the story about the racist at the local bar, another user pointed out that it was unfair to judge a whole town based on the behavior of one man. The woman who had told the story responded that it wasn’t the guy who acted like a racist that made her think Kanab had a problem with racism – it was the other people in the bar who stayed silent. “The 4 other men that heard the conversation did nothing to say, c’mon man knock it off, […] they just watched.”

Dan Watson is willing to make racist statements on public Facebook pages under his own name. We don’t know whether he has made similar statements when he was on duty, or when he was training other officers in the Tactical Tracking program. The Kane County Sheriff’s Office did not respond to LCRW’s request for comment. But the fact that he has been employed for decades as a law enforcement officer, and a trainer of other law enforcement officers, is deeply troubling. Maybe, in all those years, he’s never said anything racist anywhere his follow officers could hear him.

Or maybe, like the guys in the bar, they just stayed quiet when he did.