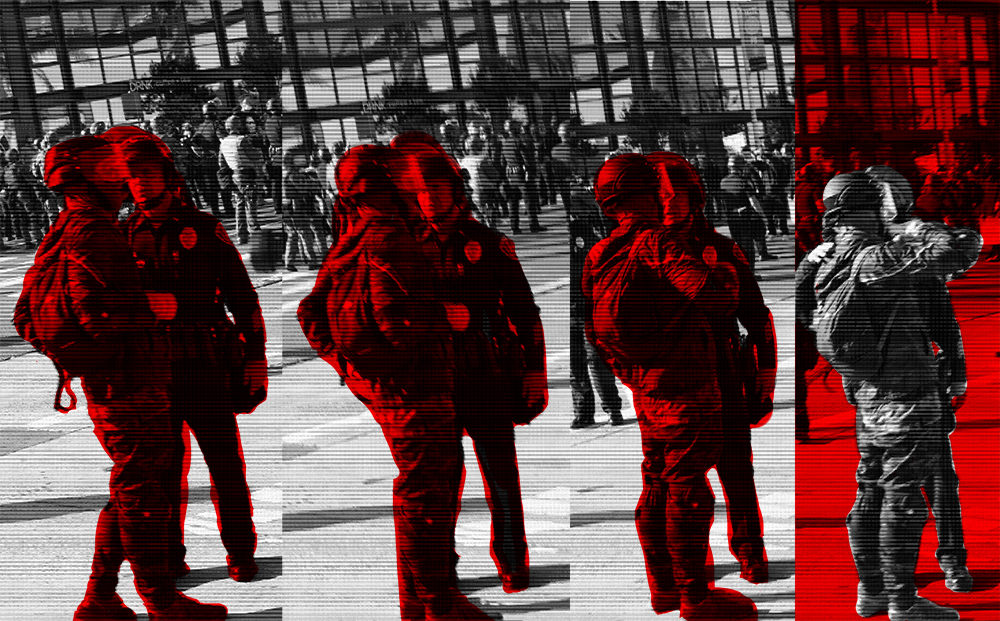 There are plenty of reasons to visit San Diego: surf, sand, and the set of groundbreaking teen film-noir classic Veronica Mars. But it turns out the systemic bias and corruption in policing outlined in the series is not as far from the truth as one would hope, and perhaps that is what pulled about 100 neo-nazis, Groypers, fascists and putschists to San Diego last Saturday. Indeed at least one person who stormed the capitol on Wednesday was welcomed with literal open arms by SDPD just three days later.

The right wing protesters took part in a well publicized “patriot” march promoted by the Rise Above Movement and Damien Russell descended on San Diego’s most touristy beach neighborhood. Pacific Beach was also the site for Russell’s previous attempt at a rally, but after being confronted by antifascists he cancelled the September march. With a new year new impetus from the attempted putsch in Washington DC, Russell and friends returned to “PB”.

The organizers changed the location of the rally at the last minute when they became aware that they were outnumbered by anti-fascists. Russell asked would- be attendees to DM him for location information. This seems to have caused a lot of confusion. Various Groyper and neo-Nazi groups arrived at the previous location in groups of two or three to be met by a growing group of counter protesters who numbered over 100 by the end of the afternoon.

Almost immediately, the small groups of right-wing rally goers would see the large group of black bloc counter protesters gathered by the pier, shout something offensive, and receive a response in the form of pepper spray and fists, then leave. Our live reporting shows a couple of these incidents, one in which a chair was thrown and another in which a member of a local school district’s board threatened protesters with a taser. There were numerous confrontations between black bloc protesters and individuals trying to film the events, and at least one dog was caught in a cloud of bear spray.

Reactions from locals were mixed, some seemed supportive and some seemed confused. Some came around to the counter-protest side, especially as more right wing groups arrived and chanted slogans like “say her name–Ashli Babbit” and held signs saying “stop the steal” may locals probably heard these for the first time when the capitol was stormed earlier that week. Some certainly took issue with “antifa” and at least one man accused me of having dressed as a Trump supporter and stormed the capitol (I didn’t). With the right-wing protesters gone, it looked like I’d be spending the rest of the afternoon explaining to strangers in swimwear that Antifa was not, in fact, a membership-based organization and that I had no ties to Hillary Clinton.

Then SDPD arrived in large numbers complete with a bike squad and began to advance down the boardwalk in a bike wall formation. Soon after, the right-wing group returned in larger numbers, some openly carrying large knives and giving sieg hiel salutes as they marched into an intersection in the middle of PB’s inexplicably still crowded strip of bars. (San Diego seems to have taken a hands-off approach to COVID management with very little evidence of enforcement of mask orders or prohibitions on indoor dining even at city owned locations.)

At times SDPD seemed in open collaboration with the pro-coup protestors. At one point an SDPD sergeant was seen with his arm around the shoulders of Francesco DeMeo. OSINT investigations by local anti fascist groups have shown that DeMeo was one of the protesters who stormed the capitol grounds in DC on the 6th of January. SDPD’s spokesman claimed they “would not have been aware of this.” SDPD did not issue a permit for the march, saying that “first amendment activities do not require a permit.” However, over the summer SDPD made numerous attempts to contact BLM groups and pages that share protest flyers. It’s not clear if they had done the same with the right wing group, but it seems likely that SDPD were at least aware of the protest in the two weeks beforehand and had time to research the nature of the organization hosting it.

With the two sides separated at the intersection on the oceanfront Mission Bay Drive, Police deployed a SWAT team with a mixture of M4 rifles, multi launchers, and pepper ball guns into the middle of the intersection. The vast majority of their resources seemed to be devoted to the counterprotest throughout the day. Photographs taken on the day show there were eight to ten times more officers policing the antifascists than the pro-coup protest. Police officers stood shoulder to shoulder facing the counterprotest, as did the entire SWAT team. One local streamer, who stood in between the two groups, commented “that’s fucked up, why are you always choosing sides?”

As SDPD held the intersection, some bottles and rocks were thrown at them from the counterprotest crowd. SDPD also claims eggs were thrown but LCRW couldn’t find any evidence. The right-wing protesters shouted at a couple of Black kids who seemed to be out buying snacks and chanted “all lives matter”. One unmasked man came from a side street to push a young activist and shout “that’s vandalism” . Presumably his comment was about the chalk the activist was using to write slogans on the street. The maskless man was surrounded and ran to the police, who let him go. Earlier they had seemingly arrested someone for taking photos of right wing protesters on a phone. The photographer had retreated past police tape to avoid threats and attacks from the right wing group.

Meanwhile, Neo Nazis attempted to use side streets to confront anti-fascists, including one who produced a knife and brandished it before being disarmed by a group with skateboards. Police did not respond to the attempted knife attack and have since confirmed they were not aware of it. One protester produced what appears to be a replica gun, but was tackled to the ground by protesters.

Around 3:00pm, SDPD announced via a small bullhorn that they had declared the counterprotest an unlawful assembly. LCRW has confirmed that this declaration only applied to the counterprotest. The sound was drowned out by booing. At around 3:30SDPD suddenly knocked a young woman to the ground and began to rush forward, another young woman’s shirt was ripped off. The SWAT team began firing riot munitions into the anti-fascist crowd as officers took turns stepping away from the line to put on gas masks. They also targeted media. I was shot 4 times while wearing a huge “press” badge. Multiple protesters reported being shot in the groin. One of the Black children who were previously harassed by protesters was shot in the face. Another young woman’s lip was split by a pepper ball. Dozens of locals and onlookers were exposed to chemical irritants.

Got 4 pepper balls in the groin area and a bunch more in my shoulders and plate carrier pic.twitter.com/snyj85Jjl5

After the volley, SDPD began moving in on counter-protesters from two sides and the decision was made to de-bloc and leave before dark. With the counterprotesters gone, the neo-Nazi and right wing groups marched through PB with police escort and then proceeded to assault people in the neighborhood. SDPD made five arrests and charged three people. As best we can tell, all of these were all counter protesters.

MAGA terrorists spit on and jumped a person today walking around Pacific Beach. Remember that San Diego PD attacked activists all day and the police didn’t do anything to these people. Remember this when they try to paint activists as the threat and violent ones. pic.twitter.com/V89lfbDTb3

One counter-protestor named Alistair, who had not planned to attend but came across the rally and decided to join, was tracked down and beaten by a group who had been part of the protest later than evening . In an interview with LCRW he said “this was entirely preventable and it was the fault of the police.”

“The cops were at fault or maybe complicit in what happened to me and my friends. If more cops were being active in trying to reign in the arms that these people had they wouldn’t have been able to come in perpendicularly and attack people throughout the course of the day.” Alistair said. “The police, yet again, are neglecting their duty to society to keep a check on these armed insurrectionists who are looking for trouble, looking for people to victimize and intimidate.”