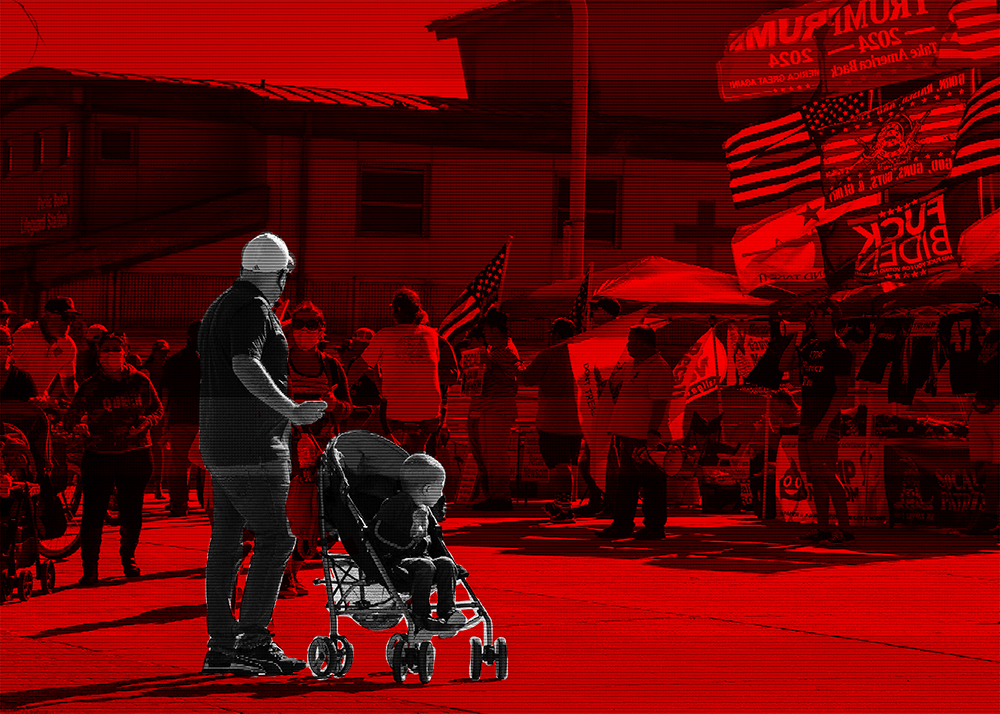 EDITOR'S NOTE : Joe Orellana is a San Diego-based photojournalist. You can find his work at https://www.joeorellana.com/. You can tip him for his work at $joeorephoto on cashapp and send him tips on events to photograph at Photo@joeorellana.com.

“Just because your team loses, it doesn’t mean you stop rooting for them.”

I overheard this while checking the traffic on my phone last Saturday. I looked up across the boardwalk and saw a passerby in a tense discussion with a Recall Newsom demonstrator. They meandered from one topic to the next, eventually to the capitol siege last month. I know it seems innocuous, but it really clarified something for me: there’s a type of person who acknowledges that Trump lost but still feels that Trump ought to be supported (and potentially, should have been re-elected).

The event was what I’ve come to expect from right wing demonstrations in my area, in that the crowd was eager to argue with passersby about the respective pros and cons of Trump and Biden. Their eagerness to confront the general public with the right’s view of reality set me on edge. Through megaphones, people claimed COVID transmissibility is overestimated and does not warrant lockdowns, to allege that Gavin Newsom was “lining his pockets with CCP money,” and to lambaste the protean liberal-democrat who is somehow pushing our country into communism. There was also, of course, reference to MyPillow CEO Mike Lindell’s _Absolute Proof–_a film which showcases a litany of conspiracy theories in an attempt to prove that Donald Trump won the 2020 election. The specifics were not discussed, but it was pitched to the audience as receipts that The Democrats stole the 2020 presidential election.

There was, partway through the day, a van whose broad side opened up to reveal a wall of speakers. A DJ manned the decks while strange men spoke. The first speaker was Cordie Williams, the founder of 1776 Forever Free, a “Community-Based Organization that Supports the Constitutional Rights of all Americans'' per the organization’s website. Williams, who was present at the D.C. capitol riot, is a licensed chiropractic doctor and holistic medicine practitioner. Williams referred to masks as “condoms” and “prophylactics,” referred to the governor as “Adolf Newsom,” and made at least two references to our unhoused population “urinating and defecating next to [the audience’s] home.” When Williams circled back to the topic of the unhoused and their bowel movements, he referred to said bowel movements as “little shifty-shiftys” and “Pelosis.”

A currently unidentified man urged the audience to stay in California and fight to prevent further decline. He urged the crowd to read both the constitution of the United States and the 1911 constitution of California. I assume he was referring to Proposition 8, which allows for the recall of public officials. What I remember most is his aggression, a familiar type I’ve seen at other rallies when a charismatic speaker wants to sow hatred of an “other”.

In a bizarre turn, CA-43 congressional candidate Joe Collins was present, along with 2-3 members of his team in matching jackets with his campaign’s logo. I do not know what someone campaigning in Torrance, CA would be doing 112 miles away in Pacific Beach, but my guess is he wanted to capture the Trump base for a future run against Maxine Waters. In any case, he found it politically expedient to attend a rally defined by COVID denialism and repeated references to CCP capture of the democratic party.