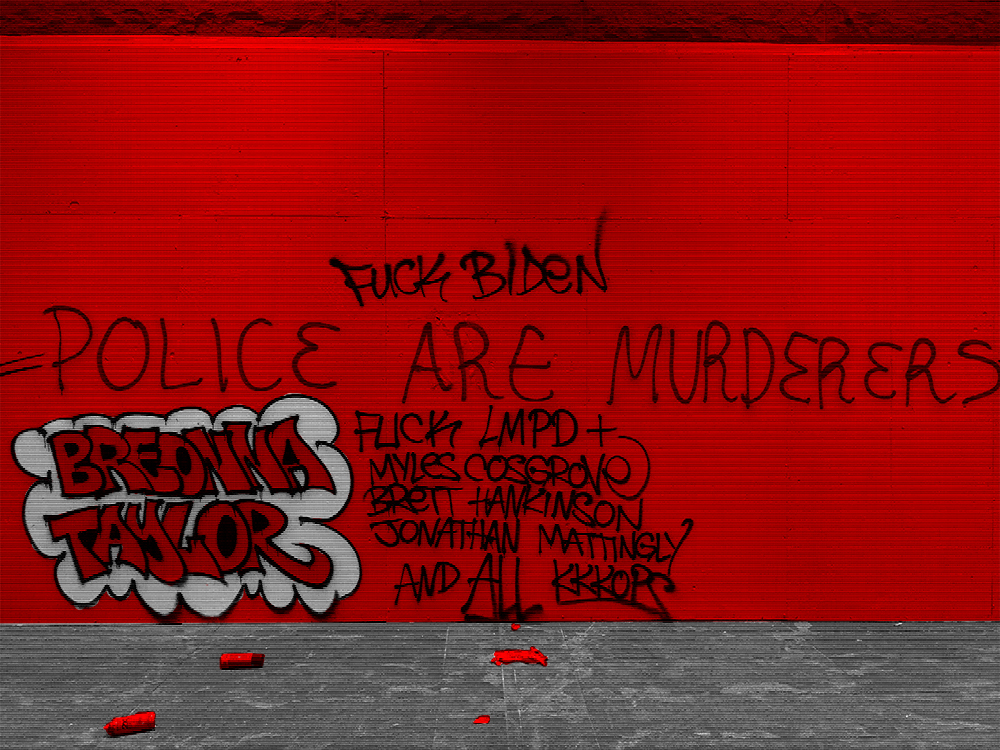 EDITOR'S NOTE : Griffin Malone is an independent journalist covering Portland protests, far right, local politics, and the justice system. They can be found on twitter, @griffinmalone6, and can be reached via Signal at 781-670-7233. Their Patreon is www.patreon.com/griffins and their cashapp is $griffinmalone

A busy day in Portland was seemingly going to end in broken windows, graffiti, and a tear gas fight with the feds. A confusing night unfolded with Black Unity showing up, Peace Police, and whole lot of infighting.

The one year anniversary of the police Killing Breonna Taylor brought calls to action and events around the country. Per usual,Portland had a lot planned.For the most part it started off strong. The sunny day started with a mutual aid fair with local groups donating bus passes, house supplies, new respirators, glasses, educational zines. One group brought oven mitts to hand out.

I’m at the mutual aid fair in the North Park Blocks. It’s gorgeous!

A cute dog shits in front of me.

A new helicopter buzzes over head.

Downtown there was a march with speakers for Breonna Taylor. Across from the march was an event for Myanmar.

March for #BreonnaTaylor on the anniversary of her murder. Couple hundred March through downtown Portland, while another rally occurs at Pioneer sqaure to oppose #MyanmarMilitaryCoup pic.twitter.com/CJ1sYDnpdW

An organizer dictates the terms of the protesters in Myanmar. He is an exchange grad-student currently studying in Portland. #WhatIsHappeningInMyanmar pic.twitter.com/7zj9S4KaFv

In the evening a lantern drop was held in honor of Breonna Taylor’s life.

Meanwhile, numbers were picking up downtown in front of the Federal courthouse. A few nights prior, protestors planned an action after the news that the Feds decided to take down the Sacred Fence. That night ended in what, to many, felt like a flashback to the famous summer 2020 Fed ar protests: clouds of tear gas filling up city blocks, yelling at DHS agents, and a horrible hangover the next morning from canisters of 10-year-old chemical weapons. March 13th was set to be the same, but it quickly fell apart in what felt like a distorted, dream-world Groundhog Day throwback to last summer.

Protestors started gathering around 9pm. There was a verbal altercation between protestors and bystanders near in the middle of the road as people entered. Some tourists were on Lime scooters riding past the courthouse taking photos of the graffiti, some chuds walked the perimeter of the park, soft music started playing, a bike with free food and supplies walked around the park. Medics, press, & streamers (yes, streamers are back) paced around chain smoking, an older man in a yellow vest walked around with a leafblower. For better or worse it had every element of the summer fed-wars we had all missed.

And then a feeling we had all forgotten about. When two crowds, both lacking energy and numbers, found each other. A march from across the river came piling in, chanting and marching. Turns out Black Unity PDX was leading the march. Black Unity PDX, formerly PDX Protest Bureau (and soon to be Black Lives Matter Skquad), is a confrontational group of young Black activists who became known for peace policing events. (Peace Policing is the act of certain protestors trying to prevent other protestors engaging in tactics they don’t support, often around actions that are viewed as antagonistic such as property destruction and what they deem as violent.)

And the mood has changed! A March came from across the river and just met up with the crowd. The crowd at the courthouse moves towards them cheering. They're chanting "I don't want to say another fucking name"

And more "scream her name"

Black Unity PDX has a history in the protests. Back in the summer they came in to autonomously led events, grabbing mics and speakers yelling at black bloc that if they were causing disruption they weren’t here for Black Lives Matter. During the summer they got some criticism for talking with cops and using the cops power cords for their speakers. Last summer, the peace police debate continued for a while but eventually they fizzled out, leaving DA’s and autonomously led organizations free to bang on plywood covered windows undisturbed for the past few months.

So here we are, months and months past when we all thought Black Unity PDX was out of the picture, awkwardly standing around. Everyone is mumbling frustrations about ending up back in June/July as Black Unity PDX attempts to start chants and speeches.

Black Unity is on the mic. Protestors move towards the doors to bang and graffiti and black unity yells at them to stop.

Someone yells "no leaders"

And they yell back that they're Black and can lead a blm protest.

Ah peace police. Back to the classics.

The tension escalated and a fight was about to break out. A crowd circled around them, Black Unity PDX’s camera crew (yes they have their own camera crew) filming everything they can. A few minutes in, someone came up and hugged one of them, magically instantly diffusing the situation. It was probably the best de-escalation a lot of us have ever seen.

Black Unity walked to the corner to have a meeting. An unidentified speaker stood up on the pole in an attempt to unify the crowd. It turned into a moving speech of sorts.

“We should come together,” the unidentified speaker started saying.

They paused to explain they are adamantly not part of any group.

They continued speaking, “We used to have this street filled with people. Sitting in tear gas without fucking masks on. But we fought against each other and we have dwindling numbers… They’re going to make us enemies with ourselves. If you want this movement to survive. If you want true abolition you have to do that together,”

Moving, yes, but the mood of the night has shifted dramatically. It’s nearing 12pm, people are watching Seattle and LA smash windows and have intense altercations with the cops and here Portland is standing awkwardly pondering how they got here.

In the downtime Black Unity is in the corner having a discussion with a white kid who wandered in. The conversation strangely turns into some questionable anti mask rhetoric.

“Masks can cause more damage than it helps. It can lower your immunity and give you infections,” someone from Black Unity said.

The camera crew is recording the entire interaction. Will this be in their documentary?

Black unity to this kid. "come out and learn. But also just FYI wear a mask cause some Karen will yell at u

Mask can cause more damage than it helps. It can lower your immunity and give you infections

we're going to be the last people to tell u to wear a mask we don't care." uh

It’s midnight now. Someone calls a meeting. The crowd circles around and there’s some talks about picking up the energy.

An unidentified person in black bloc exclaimed “What are we doing?”

Someone starts the music and black bloc starts gathering rocks. It works to some extent. Some windows get smashed and we get the first federal announcement of the evening. Black Unity is dancing in the corner.
This goes for a while–some rocks, some windows, some more announcements. The numbers are dwindling until it’s mostly press and medics standing around. Someone gets on the mic to say this is a peaceful protest. A white man yells at them from the steps and walks over to them. The tension fizzles down. The next hour is a mess of what feels like a poorly written staged reality tv show with random intoxicated people trying to be the center of attention. A sense of community is lost. Random verbal fights break out. Most attendees stand far back like spectators to a bizarre soap opera.

In all the messy chaos a lot of people left feeling empty,confused and with more questions than before. It’s almost been a year of continued protests. Are these same debates of peace police and BLM vs Anarchists going to just circle around on repeat every 8 months?