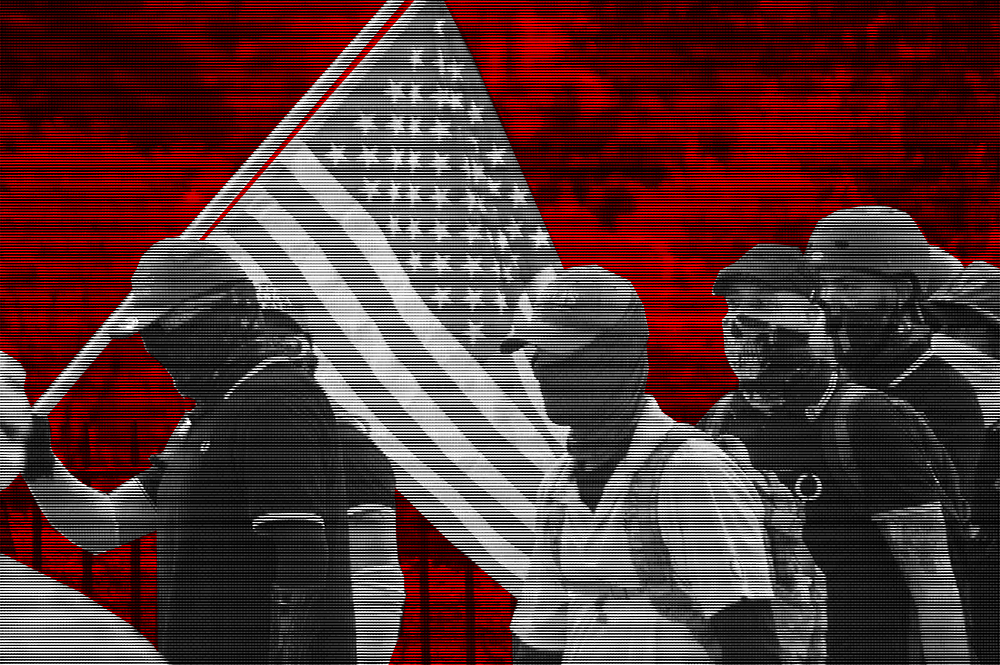 EDITOR'S NOTE : Jordan Hopkins (he/him) is a freelance independent journalist reporting on right-wing extremism in eastern Pennsylvania. You can find his work on Twitter @jhop_phl and at http://itsalienmuse.com. You can tip him for his work on Cashapp at $hopkinsxjordan. Secure comms at hopkinsjordan@protonmail.com.

In the harried days following the J6 Capitol riots, mainstream media boiled about the collapse of the Republican party. Donald Trump raged at “RINO”s (Republicans-In-Name-Only) who had betrayed him and refused to back his attempted coup. Trump loyalists spoke openly of leaving the party entirely and forming a new coalition, separate from the moderates they viewed as traitors. Chatter quickly grew about a possible third party, one that would reject conservative politics entirely for a new political entity composed of Donald Trump’s most radical supporters. MAGA supporters, QAnon adherents, Proud Boys, and more, would all gather together under one big tent–a new way forward for all the disparate, quarreling ideologies of the American right.

Of course, mainstream conservatives were quick to decry the idea–splitting the vote would ensure that Republicans would never win an election again, and even Trump quickly distanced himself from the effort. As the heat died down and Senate Republicans slid back into their old habits of blind support for the former president, the veiled threat of the Patriot Party slid into media obscurity. But in the uncensored corners of Telegram, Trump supporters banned from every respectable social media platform continued to come together under the Patriot Party flag. MAGA supporters, Qanon followers, Groypers, Proud Boys, and endless other interconnecting far-right groups and ideologies battled for control across dozens of public chat rooms.

The Patriot Party was an open channel to thousands of Trump’s more mainstream followers, many of whom had just been banned from Facebook or Twitter for the first time. Demographically older and less technologically savvy, these members proved to be easy bait for more radical right-wing groups. The race was on to radicalize as many new followers as possible and gain structural control over the burgeoning movement.

At least on Telegram, the race is already over. Less than three months after forming, the largest Patriot Party network on Telegram has been hollowed out by dozens of Proud Boys spearheading organizing and radicalization efforts from behind the scenes. Archives of publicly-available chats from the Telegram network “🇺🇸 Patriot Party National 🇺🇸” show that as many as fifteen identified Proud Boys members assumed administrator positions in many of the networked state chat rooms. Lehigh Valley Proud Boys leader Richard “Dick” Schwetz led the charge as head admin of the National chat room. More than 30 other members of the larger network openly admit to being members of the SLPC-designated hate group, and have yet to be identified.

Lehigh Valley Proud Boys leader Richard Schwetz (AKA Ricky LoFrisco, or “Rick Schwizzy”) was critical to Proud Boys’ efforts to gain a foothold within the Patriot Party. An open Proud Boy since 2018, Schwetz currently serves as head admin of the largest Telegram channel for the new Patriot Party movement. Schwetz has a long history of right-wing violence in the Philadelphia area and served as a lieutenant to recently-arrested Philadelphia Proud Boy and Capitol rioter Zach Rehl during the group’s peak of activity in the summer of 2020.

He was at the Proud Boys' "rally" in West Philly on Saturday, threatening to dox protesters.

He works for @InovaPayroll in Reading, PA.

Hey, @InovaPayroll, why do you employ hate group members? pic.twitter.com/IJTLlMmqpO

Schwetz was a cofounder of the National chat and announced on March 3 that he had assumed the role of head administrator. He quickly went about organizing the group, clearing out spam and bot accounts. Other previously-identified Proud Boys, including Vito “il’ Duce” Russo of Michigan, assisted Schwetz as admins in clearing out QAnon accounts and inviting other PB members to the group. Russo acted as a lieutenant and moderator in many of the Patriot Party groups. Russo and Schwetz joined the Virginia and Arizona chats, among others, in order to enforce the anti-QAnon policy and request changes to the organization of the state chats. If their directives were not followed, the group’s link would be struck from the “National” directory, cutting them off from the rest of the network. Schwetz was also the admin who first invited nearly a dozen previously-identified Proud Boys to the group, including North Carolina Proud Boys leader Jeremy “Noble Beard” Bertino and Russell Hampton Ouelette of the Virginia chapter.

With the threat of increased scrutiny on conservative online communities from all sides following the J6 riots, admins generally attempt to keep a tight lid on calls to violence and hate speech. Still, evidence of the group’s true racist and authoritarian undertones persist. In one archived conversation from the “VIRGINIA PATRIOT PARTY” chat, Proud Boy Vito Russo and a user named “Trollge” trade homophobic slurs before finding common ground completing a call-and-response reference to the number “1488”, a common white supremacist slogan.

In another conversation, a user named “Bitter Dregs” advocates for authoritarian rule in the United States.

“yes time to get fashy,” he says to the National chat’s more than 4,000 members. “turn on thr [sic] TV all you see are commercials of white women with black men. go to any school and the gays control it and try to turn your son into a freak [slur for trans women]. we need a caesar.”

As a result of increased media and law enforcement scrutiny, right wing groups like the Proud Boys have increasingly moved their operations out of the public eye in order to recruit without interference from antifascist organizations or police. The Patriot Party serves as a perfect vehicle for recruiting and vetting of possible new members, a platform where Proud Boys can organize and co-opt movement events in order to gain new members. This tactic is particularly evident in the “Patriot Party of PA” group, a Pennsylvania state chat led by Richard Schwetz.

The Feb. 6 rally was attended by CNN reporter Elle Reeve and a camera crew, who were recording as they approached the parking lot where the meetup was regrouping towards the end of the rally. Reeve remarks that the group is speaking to police; they claim their vehicles have been vandalized. They also noticed that at least eight members of the group had changed clothes.

“Hey, the Proud Boys are here,” Reeve says from off-camera as they approach Schwetz in the parking lot. In the background, police speak to Capitol rioter Andy Walker, whose tires have been slashed.

“How did the Proud Boys know to come?” Reeve asks, but Schwetz is already gone.

Like many right-wing groups whose leadership were involved in the planning and execution of the Capitol riots, the Proud Boys national leadership is in disarray. With big names like Enrique Tarrio, Ethan Nordean and Joe Biggs facing federal charges, organizing and recruiting for the group has ground to a halt. The Patriot Party model offers a solution - infiltrate and co-opt the organizing capacity of semi-political movements in order to maintain an air of legitimacy, while simultaneously building public support and reaching out to potential members. Organization culminates in in-person rallies, where online identities can be confirmed and individuals are vetted. Already, the tactic is reaping new members for the group. In one particularly harrowing conversation, a user tagged as “Youth Party Lead” asks Schwetz for advice on how to join the Proud Boys. Via video message, Schwetz advises the user to contact him personally for induction instead of the national Proud Boys leadership - as soon as he turns 21.

“Yeah, so when you hit 21 you apply directly to me,” Schwetz says in the video message. “I don’t want you getting caught up with any vermin that might come across your application. They might mistake it for a piece of cheese.” Schwetz and the Lehigh Valley Proud Boys have actively disavowed any association with former Proud Boys Chairman Enrique Tarrio, who has a history as a federal informant.

As the American right continues its restructuring in the wake of the J6 Capitol riots, groups like the Proud Boys face a crowded field of competitors. Between PB, Patriot Front, the Boogaloo movement, Groypers, and countless others, right-wing organizations must organize and innovate or be subsumed by the ever-accelerating online zeitgeist of American fascism. Already the Proud Boys find themselves on a back foot, trying to stay relevant while the state finally brings law enforcement to bear on their activities. The Patriot Party serves as an easy feeding ground for recruitment, allowing Proud Boys to connect in semi-legitimate channels to reorganize for their next moves - but it’s not a permanent solution. With network growth stalling, increased media attention from extremism experts, and greater risk of infiltration via public chats, many of the soft targets have already moved on to greener pastures.