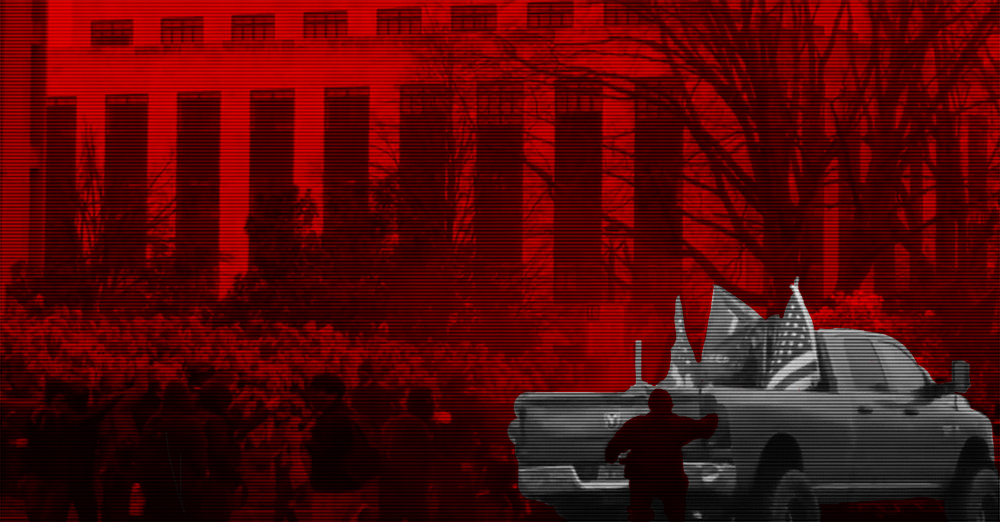 EDITOR'S NOTE : Griffin Malone is an independent journalist covering Portland protests, far right, local politics, and the justice system. They can be found on twitter, @griffinmalone6, instagram, @griffinsjournalism and can be reached via Signal at 781-670-7233. Their Patreon is www.patreon.com/griffins and their cashapp is $griffinmalone

A “freedom rally Caravan” was announced early in March and antifascists began planning a counter-demonstration. Right wing protests in Salem, especially during the nation-wide wave of “Stop the Steal” rallies between the election and inauguration. The number of protestors forced the cops to block the right wing caravan going to the capitol but that didn’t stop some altercations wherecars windows were shattered, weapons were drawn, and people were arrested.

Early March flyers began circulating for a “Freedom Rally” from Sandy, OR to Salem State Capitol set for March 28th. Within a few days counter protest action was planned for the State Capitol. People started gathering around noon. Within an hour there were around 150 counter protestors, medics, and press filling the sidewalks in front of the Capitol. A large batch of shields was dropped and counter protestors milled the streets carrying gas masks, bats and a few paintball guns.

Meanwhile in Sandy, the Freedom Rally has not left yet. They are still giving speeches to a small crowd. The car caravan was at least an hour away from Salem. The energy at the Capitol felt worrisome. The rain was picking up, counter-protestors were getting cold and anxious and nothing was happening.

Someone with a “TRUMP 2020” flag rides by on an electric longboard and incites the crowd. The antifascists rush over to the Trump supporter as they ride back towards the police.

More cars and trucks start to drive through by the counter protestors at this point. Every truck that would turn the corner with a large American flag would pique the crowd’s interest. Most cars slow down, drive by and look out the window in confusion or annoyance, some honk in support. Every so often a car will flip off the counter protestors or yell something at the crowd, almost always ending in counter protestors throwing rocks, poles, paint balloons, silly string or anything else they could easily pick up. The cars speed away with a broken taillight or a dent.

This goes on for a bit–small altercations with random cars. The Salem Police come out with an announcement, warning those in the roadway to stay on the sidewalks. The police announcement only serves to rile up the crowd.

A chud truck gets their flag swiped and pelted with projectiles. Someone sprayed and I got it in the face #SalemOregon #PortlandProtests #Antifa #ProudBoys #BlackLivesMatter pic.twitter.com/aj3EpxKbBb

A large blue truck with two flags on it gets one of their flags snatched. As they approach the crowd they slow down. Then they speed up towards the crowd, swerving right and then left, nearly hitting multiple people. One counter-protest stands in the middle of the road and almost gets hit. The truck brakes with nearly a foot to spare between itself and the counter-protest.

As it speeds away it gets a broken window and a paint balloon splattering the interior. A few more cars drive by people and get the same fate as the truck.

They threw something at the window. The driver did not break his own window. pic.twitter.com/trqlM3iAks

While counter-protestors are still at the Capitol, the police have stopped the right wing caravan a few blocks away and told them they can not go to the Capitol. The caravan is redirected to a few blocks north from the antifascist group as riot cops come out onto the park, trying to get the counter protestors to disperse.

Riot cops on both sides of protestors. Lrad announcement from one side. Riot cops walking towards crowd. Dispersal order. pic.twitter.com/AJi2n2otEk

Riot cops push through the park a bit and declare the event an unlawful assembly. After a few minutes the counter-protestors catch on and decide to leave to find the right wing caravan. An altercation breaks out. A driver pulls a gun and loads a round into the chamber. The cops nearby quickly get him to drop it and detain him. He’s later released without charges.

As the counter protestors march a few blocks away, the right wing caravan parks just a few blocks north of the capitol and are gathering. They’re armed, many carrying paintball guns, real guns, knives, bear mace, and bats.

They followed us for a bit. Then stopped. We look to gay to pass as not antifa press I think. They're holding a line in their group. Still unsure where antifa group is. pic.twitter.com/3cegdHMfyL

Eventually counter protestors make their way back to the park. Riot cops charge out to make a targeted arrest and the crowd moves away from the park. Some of them notice that the right wing caravan is only a few blocks away and start moving towards them.

At this point the crowd has split in half. Less than 100 counter protestors walk towards the caravan. The police notice and start to circle the black to block them from doing so. Before police get there, two right wing trucks with multiple american flags pull up next to the counter-protestors.

Counter protestors break some flags and smash the back of the truck. The driver gets out and gets maced. At this point, cops block the right wing caravan from the counter-protestors and push out towards the group trying to make arrests. They arrest a few people and help the right wingers’ truck backup and leave.

Chud drove by and truck got smashed up. Meanwhile cops blocked where chud was coming from so no more cars could come, declared it unlawful and pushed the crowd. Arrested two people. pic.twitter.com/9BxBzSAPL5

In the scuffle a journalist is arrested.

At this point most of the crowd has left. When the cops leave the block, the street is empty. The right wing caravan has dispersed. Some trucks are still circling, but it’s raining hard, freezing outside, and the streets are scattered with police cars and OSP snatch vans. Cars from the caravan keep circling blocks in the rain.

Riot cops just marched forward and then begin running, chasing somebody after a couple pepper balls were fired by officers. I have no idea what led to this. pic.twitter.com/Mxorc1osKD

Past right wing events have ended with right wing cars circling looking for protestors to assault, and Sunday was no different. One protestor told LCRW about an attempted assault they experienced. They were walking to their car around 5:30 when as a large grey truck with an extended cab approached them. People inside the truck started to yell so they turned around. The truck made a u-turn following them. They managed to find shelter in a nearby public building.

“Then a green SUV arrived. Guys with masks got out [and] pounded on the door while I hid in the bathroom, fearing for my life,” the protester recounted.

Once behind the locked door they managed to call 911. About 30 minutes later the cops arrived and the men in cars left. The officer, according to the protester, refused to take down an assault report because no physical altercation occurred.