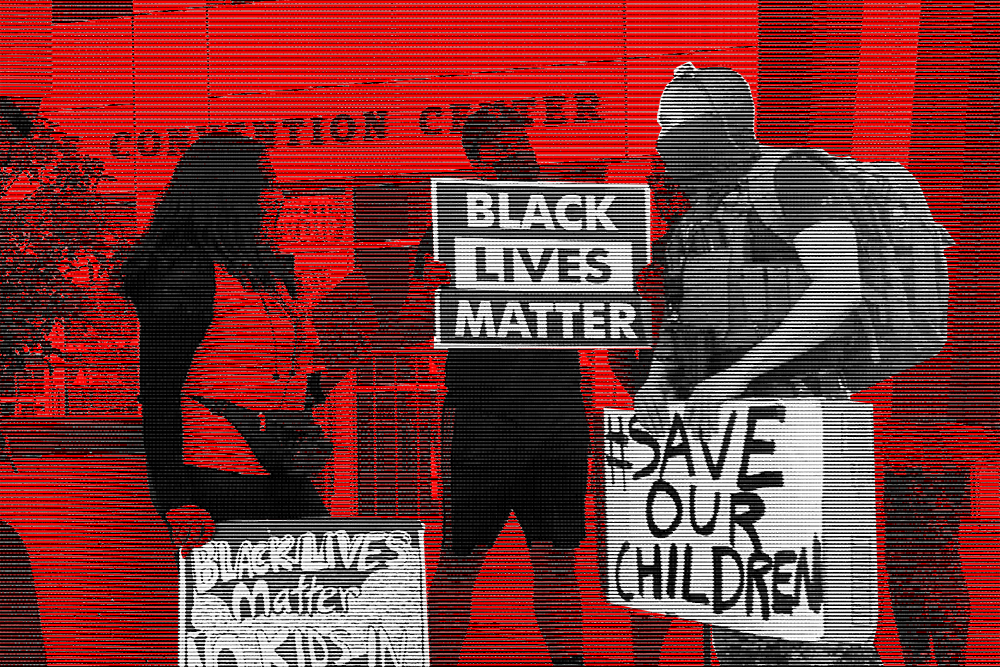 EDITOR'S NOTE : Bella Davis is one of the best journalists reporting in New Mexico right now. You can contribute to her work on Cash App at $bladvs or Venmo at @bladvs.

“The Proud Boys and other white supremacist groups should never be given the space to feel comfortable openly displaying hatred in Albuquerque,” Zoey Craft, co-founder of the student activist organization Fight For Our Lives, said.

A “White Lives Matter” rally that was expected to take place in downtown Albuquerque on Sunday and be attended by local Proud Boys was a failure–just as other such events nationwide had been. White Lives Matter rallies were organized on Telegram in cities across the country but when the day came, it was mostly anti-racist protesters who gathered.

A couple hundred counter-protesters gathered at Civic Plaza at 10 a.m. in anticipation of the rally. Folks carried signs that read “Make racists afraid again,” “Nazi punks fuck off” and “Good night white pride.” Fight For Our Lives organizers led chants of “Fuck the Proud Boys!” and “Every nation, every race, punch a Nazi in the face!”

Some counter-protesters gave out water and snacks. A few dozen people took part in a dance party organized by ABQ Street Action Coalition.

The community first got word of a local White Lives Matter rally about a week ago. Brian Pritchard, a Rio Rancho resident and self-identified Proud Boy who was filmed at a Trump rally in September yelling at Black Lives Matter demonstrators, sent threatening messages to an activist encouraging them to attend Sunday’s failed rally. He wrote that several local Proud Boys needed their “4th coin,” a part of the initiation process that’s fulfilled by attacking antifascists.

Pritchard also sent messages last month to a Black activist that included racist slurs and threats of lynching. He was a no-show on Sunday.

At 11 a.m. — when the White Lives Matter rally was expected to begin — one man stood in front of the Convention Center, across the street from the plaza, with an AR-15 and a sign that read “All guns matter” on one side and “#SaveOurChildren” on the other. He had three young kids with him.

About 20 minutes after his arrival, police in riot gear showed up and formed a circle around him and his family. Most counter-protesters had gone back to the other side of the street at that point, but came back when they saw police.

APD just showed up and is protecting this lone guy with the “all guns matter” sign pic.twitter.com/7akchkmF3v

Police escorted the man—who identified himself to reporters as “D” and later as “Deonte”—and his family through the fence at the entrance of the Convention Center and went inside as counter-protesters surrounded the area, chanting “Nazi cops” and “I don’t see no riot here, why are they in riot gear?”

“D” was seen about 10 minutes later exiting out of the back of the center and walking down the sidewalk with his family trailing behind him. According to a police spokesperson, he was given a citation for “abandonment or cruelty to a child.”

Shortly after that incident, counter-protesters confronted a man who was recording video. Street medics said they’d seen him taking photos of people at anti-police protests earlier this year. They said he had refused to identify himself, leading them to believe he might’ve been a right-winger gathering information on protesters.

As medics checked in with him, a counter-protester asked him if he was a Proud Boy. He said no and added that the Proud Boys “protected children and families in places like D.C., that’s what I know about them,” which is a weird and false claim to make about a hate group.

The counter-protest wound down after that, at around 12:30 p.m. Zoey Craft with Fight For Our Lives said the turnout, which was the best Albuquerque has seen at a protest so far this year, was encouraging.

“When the entire community comes together, we not only outnumber white supremacists, but we show that we love each other, care for one another, and protect each other,” Craft said. “I was proud to see many organizations and individuals standing together united against white supremacy to send a resounding message that racism has no place in our beautiful city.”