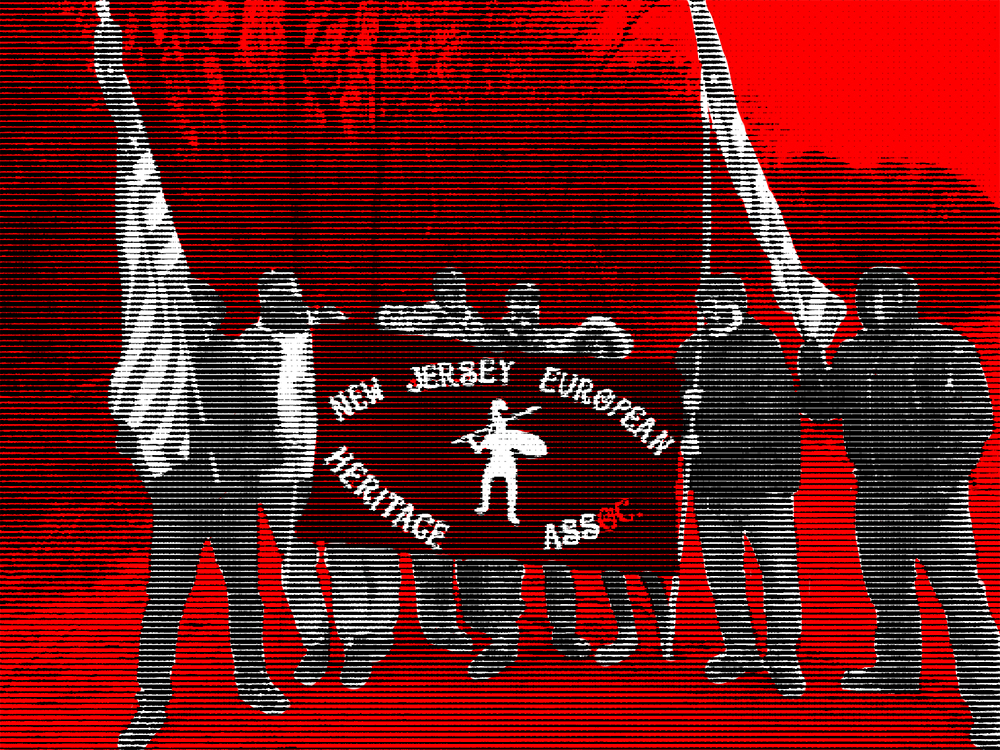 EDITOR'S NOTE : Jordan Hopkins (he/him) is an independent journalist reporting on right-wing extremism in eastern Pennsylvania. You can find his work on Twitter @jhop_phl and at itsalienmuse.com. You can tip him for his work on Cashapp at $hopkinsxjordan. Secure comms at hopkinsjordan@protonmail.com.

UPDATE 16 SEPTEMBER 2021 9:00PM: A previous version of this article identified Jackson Bradley as a participant in a January 2021 leafleting action captured on video in Philadelphia. Upon further investigation, this information cannot be verified. This article has been edited to reflect this development.

An April “White Lives Matter” rally planned to take place in Philadelphia is being organized primarily by members of the New Jersey European Heritage Association, or NJEHA. An SLPC-designated hate group, NJEHA was formed in 2018 and has a wide presence in the Northeast United States. The Telegram group “White Lives Matter Philadelphia” is operated by previously-identified NJEHA member Jackson Browning Bradley, a white supremacist and neo-Nazi with a long history of far-right activity in the Delaware Valley.

Plans for organized “White Lives Matter” rallies across the country were first disseminated via multiple white supremacist Telegram channels and were picked up by antifascist researchers in late March. Coordinated from the “White Lives Matter - 4/11” Telegram channel, networked channels for rallies in as many as fifty cities across the US and Europe have appeared in the last three weeks. Groups range from as few as two to as many as two hundred members, organizing as part of a nationwide “day of action” planned for Sunday, April 11. The Philadelphia channel has quickly grown to one of the largest in the network - at the time of this reporting, with over 100 subscribers. It’s also one of the most racist, routinely posting content so openly hateful that other users have suggested distancing themselves from the channel, even wondering if it could be a “false flag” planted in the network by federal operatives.

In fact, the “White Lives Matter Philadelphia” channel is confirmed to be operated by members of the New Jersey European Heritage Association, a white supremacist group operating out of southern New Jersey. NJEHA has a small following but was responsible for a majority of white supremacist propaganda in New Jersey in 2019. The channel is operated by NJEHA member Jackson Browning Bradley, a Philadelphia resident with a long history of far-right organizing. An NJEHA member since its formation in 2018, Bradley is a vicious anti-Semite and adherent of American neo-Nazi George Lincoln Rockwell (“GLR”). Bradley served as the infiltration point for a large disclosure of information about the hate group by antifascist researchers in 2019, which identified the group’s leader and the extent of their activities across the mid-Atlantic. Bradley was identified with NJEHA on multiple occasions, including an event at Princeton University in 2019 that featured neo-Nazi and Holocaust denier Patrick Little.

The “White Lives Matter Philadelphia” channel is one of the most openly racist of the WLM-4/11 network, routinely espousing violent and genocidal anti-Semitic rhetoric. Posts shared from known NJEHA channels spread literal Nazi propaganda and call for violence against non-white ethnic groups.

“The end of World Jewry…this new war will be more decisive then[sic] the last one,” one post shared from an NJEHA-operated page states. “We shall end the Jewish Control over our society along with the White Traitors who worked with them to destroy our Race”.

Bradley’s distinctive writing style can be identified from his active Facebook page, where he routinely crossposts black-and-white photos of segregated Philadelphia from his Telegram pages. Bradley also operates in the central “White Lives Matter - 4/11” organizing channel under a known alias, where he posts links to the official NJEHA Telegram page. He also claims in conversations to have organized marches with Patrick Little, further solidifying proof of ties between NJEHA and the Philadelphia rally.

The planned march will gather in Philadelphia on April 11 in conjunction with other “White Lives Matter” marches planned across the country. Bradley claims that the group will rally in Center City before marching to Northeast Philadelphia and/or South Philadelphia. Other identified participants include members of the Philadelphia Proud Boys and the Patriot Party of PA, as well as other members of NJEHA. All named groups should be expected to be in attendance. Fliers for the national movement claim rallies will begin at 1pm, but a specific time for the Philadelphia rally has not yet been confirmed.