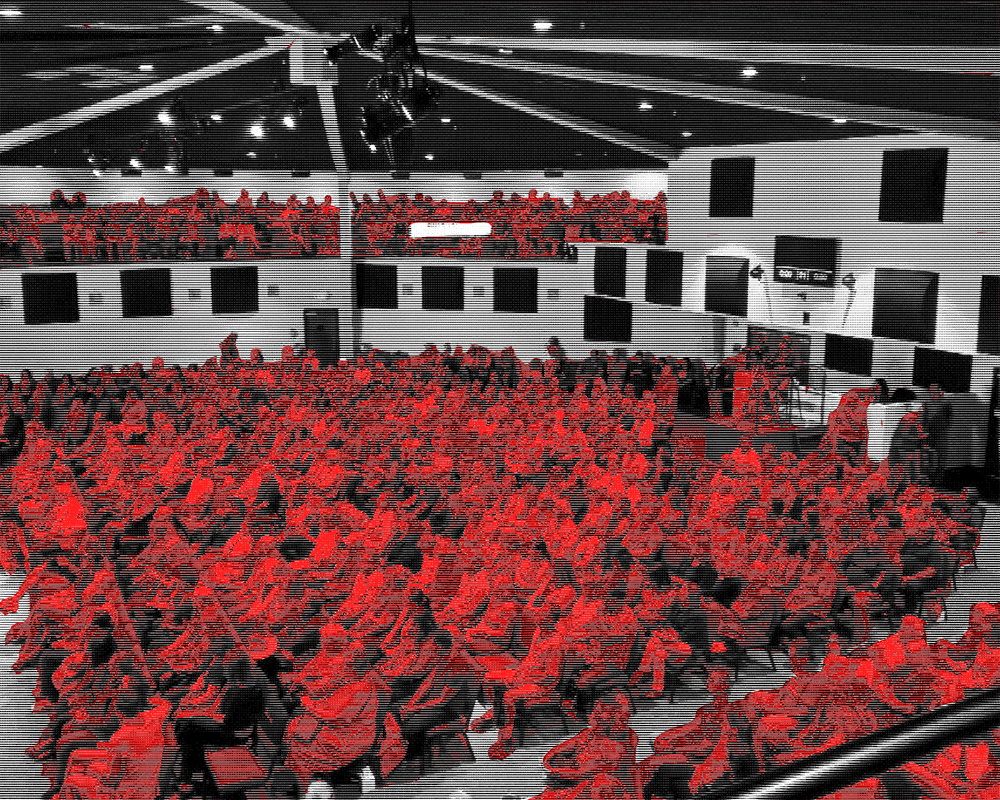 EDITOR'S NOTE : Andrew Gunn is a New Mexico-based freelance journalist, editor and photographer currently living in Albuquerque. You can contribute to his work and/or coronavirus medical bills stemming from covering COVID denier events on Venmo @agunnwrites. Follow him on Twitter @agunnwrites.

New Mexico, one of the most effective states in the country at combating the COVID-19 pandemic, played host to a different, more insidious strain of virus this week.

“Dr.” Simone Gold, a widely discredited physician, COVID truther and Capitol insurrectionist facing federal charges and currently out on bond, came to Albuquerque on May 11 for the second stop of what’s been dubbed her “Uncensored Truth Tour.” Rather than participating in more acts of sedition while awaiting trial, the cross-country RV tour was crafted to continue her quest of critiquing a perceived threat of government overreach, questioning vaccine safety and decrying COVID-19 public health regulations as infringements on personal liberty.

And did she ever find the perfect staging grounds for her conspiratorial jaunt through the Southwest.

I'm coming to you live from the "Uncensored Truth Tour" at the Legacy Church on Wyoming, featuring Dr. Simone Gold, a COVID truther and Capitol insurrectionist. I'm not wearing a mask, the better to blend in with the estimated 300+ crowd here to see the doctor speak. pic.twitter.com/C305VePEQv

Gold’s speaking engagement and book publicity stunt was hosted by the highly controversial Legacy Church, a nondenominational megachurch (20,000 members and counting) in a wholly nondescript part of the suburban mid-heights of Albuquerque. The setting and target audience couldn’t have been more receptive—with perhaps the exception of the two journalists in attendance. Her anti-science grift was punctuated by standing ovations from the 250-strong audience, ugly racism, and bizarre references to the Nuremberg trials and the specter of communism.

In short, the event was a somber indication that, despite the best efforts of the Biden administration to conduct the largest vaccine rollout in history, the United States’ coronavirus pandemic woes are likely far from over.

FOOL’S GOLD: THE BIRTH OF A CON ARTIST

The main bullet points of Gold’s life in the public sphere are somewhere in the desert between personally humiliating and institutionally dangerous.

Denounced as a “toxic purveyor of misinformation” who is “actively contributing to rightwing extremist rhetoric” by Dr. Irwin Redlener, the director of Columbia University’s Pandemic Resource and Response Initiative, Gold has seen a meteoric rise from relative obscurity in residency at a Long Island hospital to her current status as a hero among the anti-vaxxer milieu.

Before being arrested on Jan. 18 for her involvement in the storming of the U.S. Capitol—when the 55-year-old Beverly Hills resident gave a brief speech with a bullhorn inside the Capitol rotunda—Gold gained fame in large part because she amplified Trump’s baseless claims of hydroxychloroquine’s efficacy as a COVID-19 treatment.

Simone Gold, who gained her notoriety as an anti-vaxxer activist during the pandemic, is the founder of the extremist right wing organization America's Frontline Doctors and was arrested for her actions on Jan. 6. She has done her best to spread misinformation regarding COVID-19.

Self-anointed as the “doctor who went viral,” she appeared last summer at a sparsely attended news conference in front of the U.S. Supreme Court, where she lambasted public health measures designed to mitigate the worst effects of the pandemic. Video captured of her speech was retweeted by Donald Trump and Trump Jr. before it was scrubbed from social media platforms for promoting misinformation.

After founding the widely ridiculed COVID truther organization America’s Frontline Doctors and publishing a book, Gold organized the unironically gallows humor-laced “Uncensored Truth Tour” in an attempt to move her fringe beliefs to a more mainstream audience. Kicking off on May 10 in Arizona, the tour touts itself as “a relentless force of scientific and legal facts fighting back against censorship, chaos and the undeniable slide towards communism that lurks beneath the tyrannical lockdowns of governmental ‘public health’ policy.”

And Legacy Church, true to its well-established form of promoting alt-right values and political figures, welcomed her with open arms.

THE CHECKERED PAST AND DANGEROUS PRESENT OF LEGACY CHURCH

Legacy, more a political organization than a house of worship that enjoys luxurious tax exemptions due to its designation as a religious institution, has historically had a difficult time staying out of the media spotlight—though its chief pastor seems to have no issue with widespread public ridicule.

Founded in 2002, the megachurch and its unscrupulous leader Steve Smothermon have regularly flouted New Mexico Gov. Michelle Lujan Grisham’s public health orders since the pandemic reached the state. Legacy was fined $10,000 last year for hosting a largely maskless Christmas Eve service while the state was averaging 24 COVID deaths per day near the height of New Mexico’s virus crisis. Charlie Kirk, a white supremacist and Trump acolyte, was a featured speaker at the church in March of this year at another COVID conspiracy rally.

According to reporting by local television station KOB, a spokesperson for Lujan Grisham reiterated that masks are still required indoors under the state’s public health order as of the writing of this story. Churches that ignore regulations — as Legacy so brazenly has and continues to do — could face legal and financial repercussions.

IN THE LION’S DEN OF LEGACY

Despite being well over a year into the pandemic ravaging the United States, which has wrought over 581,000 confirmed deaths in the country to date, Gold’s misinformation at Legacy Church on Tuesday night flowed freely.

The entirely maskless event was juxtaposed against horrific reports coming in from COVID-battered India and took place against the backdrop of New Mexico’s measured reopening efforts amid the worst public health crisis in a century.

Thank you for using hand sanitizer and not adhering to literally every other CDC public health advisory in existence. I hate it here. pic.twitter.com/6TxVALw6BS

The festivities kicked off ten minutes after 8 p.m. MT—the church’s Tuesday evening service had to finish, after all. The line of people who came to see Gold’s cut-rate conspiracy peddling snaked out the door and around the building into the packed parking lot, and the only mask in the building I was aware of was in my pants pocket (never more grateful to be fully vaccinated). In a surprisingly self-aware acknowledgment of the inflammatory nature of their guest, the church’s property was well-patrolled by multiple watchful eyes. The event itself, which required filling out an online form but was free and open to the public, reassured registrants that “security will be present,” and indeed, the proceedings were closely monitored by at least eight seemingly unarmed nightwatchmen. More on that later.

"We have a dictator instead of a governor," says the pastor in opening remarks.

"I didn't know Ted Nugent was a friend of (Dr. Simone Gold). You know, the guy who wrote Stranglehold."

Was just accosted by church security. "We noticed you're taking a lot of photos." Stand by. pic.twitter.com/ntigN3oMcm

Gold wasted little time in jumping into the most malicious conspiracy theories espoused by the physician splinter group she spearheads.

A common refrain during Gold’s 60-minute sermon was her insistence on hydroxychloroquine’s usefulness in solving the riddle of the pandemic, doubling down on the former president’s disproven claims that the anti-malaria drug is effective at treating the coronavirus.

To this reporter’s complete lack of surprise, Gold’s COVID-dismissing invectives were enthusiastically received by the overwhelmingly white audience.

I've never seen this many white people in one setting in my five years in New Mexico. The Capitol insurrectionist is now going over innumerable conspiracy theories about how they calculate COVID deaths, making Glenn Greenwald proud, I'm sure.

Indeed, it was difficult at times to distinguish Gold’s missives and her fawning crowd from a MAGA devotee rally. I was darkly reminded of Trump’s last appearance in the Land of Enchantment, a rabid re-election campaign event in the staunchly conservative suburb of Rio Rancho in September 2019.

In a particularly unsavory stretch of Gold’s speech, she conflated public health efforts to vaccinate as much of the population as possible with the Holocaust and the historical persecution of the LGBTQ community. About halfway through her disjointed talk—and after twice mentioning the Nuremberg trials for little apparent reason—Gold labeled the vaccination drive “the civil rights battle of our time…it is medical apartheid, and it’s just as ugly.” Explosive applause followed.

"The civil rights battle of our time is nipping at our heels. It is medical apartheid, and it's just as ugly."

I have no words. None. pic.twitter.com/91wYHWfFxl

Much of her pontifications centered around triggering audience fears of the government using medical rationales to justify stripping citizens of their rights. The lily-white crowd roundly booed when Gold mentioned the FDA’s recent approval of vaccines for 12-15 year-olds. After Gold listed “deities” (Dr. Anthony Fauci, the World Health Organization and other targets of her conspiracy theories), an unidentified attendee appended the list with two words he made no attempt to vocally suppress: “George Floyd.”

To cap off the sordid affair on an otherwise pleasant New Mexico spring evening, Gold held a Q&A session with members of the attending public before migrating to the church lobby to sell autographed copies of her book “I Do Not Consent: My Fight Against Medical Cancel Culture.”

Bathed in an ocean-blue light, Gold’s parting words from in front of a drum kit encased in acrylic glass: “Everyone should have hydroxychloroquine in their cabinets.”

THE REPORTER’S MASK COMES OFF

It was perhaps too much to hope that a journalist would be able to effectively document a fundamentalist, anti-vaxxer, anti-lockdown event without attracting unwanted attention, and my fears were partially realized midway through the soiree when the gazes of three muscle-bound security guards found me in a hallway just outside of the chapel.

Was just taken aside by three bulky himbo security guys, who accused me of taking photos of children to dox their families. A woman requested to take my phone, go through my gallery and delete photos of her family, which she did (crowd pics). They're still in my trash folder.

At first presenting conflicting stories about why they had singled me out for questioning, eventually they consolidated their angle with the assistance of a late-arriving woman who leveled an accusation against me of attempting to dox her children. After consenting to let Karen Doe scroll through parts of my photo gallery and being frisked by security for weapons (I didn’t want to miss the party), I retook my seat and saw out the end of Gold’s presentation.

The so-called Uncensored Truth Tour, which suffers from very nearly a total lack of anything resembling truth, next takes its snake oil pitch to five Texas stops before appearances in New Orleans and Tallahassee. According to a report from Mother Jones’ Stephanie Mencimer, it’s unclear if Gold, as a result of her involvement in the Jan. 6 insurrection, obtained permission to travel outside of central California—a condition of her release.

Before being unceremoniously escorted off the premises by the aforementioned crew of hired muscle, I took a break from Gold’s speech to gather my thoughts and take a moment to escape the tight confines of what undoubtedly will prove to be a superspreader event. In a fluorescently lit, inoffensively painted hallway just out of sight of the church cafe, where maskless baristas had earlier served coffee to maskless parishioners, a sign bolted to the drywall listed a Bible passage: 2 Thessalonians 2:10, which describes the damnation of those who are deceived by falsehoods and thus not saved from eternal hellfire.

Above the verse, the church wrote four words of their own: “We embrace the truth.”