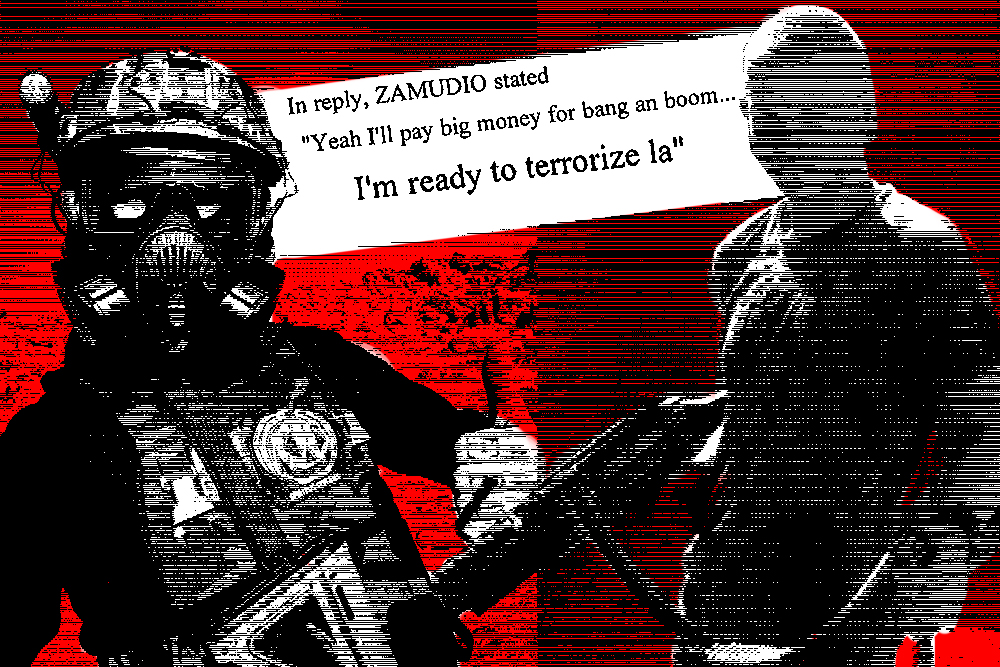 EDITOR'S NOTE : James Stout is a San Diego-based journalist. You can donate to him on cash app at $jamesstout and venmo at @james-stout-5.

In late July 2020, activists in San Diego were planning a BLM march in La Mesa. There hadn’t been a large action there since banks burned and the cops shot a grandmother’s eye out (within policy apparently) in late May. After those banks burned, a group of anti-BLM locals had sprung up under the name “Defend East County”. Soon DEC had over 20,000 members in their Facebook group and Justin Haskins, a perpetually sunburned Arizona resident, claimed leadership of all of them.

Among that group was Grey Zamudio, age 33. To the uneducated eye, his Facebook page might look like he was a soldier or private security contractor. His banner image features a suppressed, short barreled, and non-California compliant AR15. Zamudio was a long time airsoft enthusiast, and some of his shooting pictures could be mistaken for airsoft. When he played airsoft, Zamudio used the callsign “Shadow Moses” in homage to the computer game Metal Gear Solid. (He seems to have had a somewhat passing understanding of the plot, or only appreciated that the main character was good at killing people. The game focuses on the evils of war and violence for profit.)

But the guns on his page were all too real.

After he quit airsoft in 2014 because it “wasn’t real enough” he started training with real guns. Soon Shadow Moses would become more than a callsign. It was a white nationalist group that included two cells, at least six members, and at least one cop.

Shadow Moses was not his only alias. Zamudio has used multiple spellings of his first and last name online as well as Thadeous (his middle name) and Barkley (which may be his father’s name). Other members of his family use Zamudio-Barkley hyphenated.

In the Defend East County Facebook Page, Zamudio offered firearms training. He openly bragged about his short barreled rifle (ownership of which is illegal in California), even giving details about the 13.5” barrel. Haskins himself encouraged members of the group to carry guns at protests, saying “you don’t need [Sheriff] Bill Gore’s signature” on a license to carry “You have Thomas Jefferson’s”. At a right wing event in January 2020, a young man brandished a replica weapon at protesters. There have also been suggestions a gun was brandished at the even in August 2020.

In the days before Zamudio’s arrest, he posted in “DEC Choir Boys” a sub group of DEC committed to street fighting with members of BLM and Antifa and was tagged in “Exiled Patriots,” a group which split from DEC over a personality conflict between its leader Mike Forzano and Haskins.

Like many members of DEC, Zamudio discounted arguments about race, privilege, and injustice in the United States. Zamudio claimed not to have had a father and that his mother was a “homeless tweaker.” Yet he had “worked hard” and escaped the cycle of poverty. Zamudio had a criminal record before he was arrested by the FBI, and had been working as a plumber. Zamudio’s childhood is a little unclear, but at some point he got “white boy” tattooed across his knuckles–a phrase generally associated with white nationalist gangs who sometimes call themselves Peckerwoods in East County San Diego. Other members of DEC and Exiled Patriots have links to similar groups.

Zamudio was one of several members of DEC who posted increasingly violent rhetoric. In one interaction on July 27th, Zamudio posted “this is what civil war looks like” and chastised other members of the group for not carrying weapons. On July 5th in a thread under a picture of a man that Haskins claimed was “beaten and kicked repeatedly” Zamudio commented, “This is what happens when you are an idiot that believes there [sic] peaceful, this is war time! Talk softly but carry a glock19 [sic]”. In response, one member of the group asked if he would shoot a young girl if she tried to punch him. Zamudio replied “I do shoot girls that swing on me, equal rights!” He also believed that the “BLM message is that all white people must die and America must burn for it’s [sic] past sins.” Zamudio finished the discussion by posting “no one’s life matters. It’s all over with a 3.5lb pull of the trigger, life is cheap because ammo is cheap. Your [sic] a sheep and I am a wolf”.

On the 31st of July, the day before the planned La Mesa march at which DEC members would fight with anti-fascists while the police largely did nothing, Forzano posted “boots on the ground, sound off my brother’s[sic] and sisters”. One member of the group named Matthew McCormick replied “y’all can call me when you need people to ‘sing’”, Forzano responded “I’ll Dm you” and then McCormick tagged Zamudio saying “tell them what’s up”.

Zamudio didn’t limit his violent rhetoric to DEC. On his own page he posted status updates including “the only good liberal is a dead liberal,” “anything the police do will make the situation worse, it’s up to viglantie [sic] militia to crush the liberal terrorists” and “I’m ready to die, I welcome Valhalla”. It was these posts which led a citizen to report his activity to the FBI in San Diego.

On the morning of August 1st, local FBI agents executed a search warrant on Zamudio’s home and vehicle. They found the illegal short barreled rifle that he had posted about on Facebook, another rifle, two handguns, and two homemade suppressors. All of these items could be legal if registered with the Bureau of Alcohol Tobacco and Firearms and owned outside of California. He also had a copy of the Turner Diaries, a popular text among white nationalists. Zamudio had not registered the weapons, and his suppressors were homemade. They were likely constructed from a solvent trap that can be easily modified to make a rifle suppressor that significantly reduces the sound of shots being fired and may help avoid detection by law enforcement who use shot seeking hardware to track shooters.

But the FBI found more than the illegal guns in Zamudio’s home. Zamudio gave an interview immediately after he was arrested and mirandized, and confessed to knowing the guns he owned were illegal. The FBI also obtained Zamudio’s phone, and within a week a forensic analysis had revealed that among the videos of Zamudio threatening protesters in his $80,00 truck and claiming to have pointed guns at them, there was a group chat named “Shadow Moses.”

The chat, which was between Zamudio and a man who turned out to be a Georgia Sherriff’s Deputy and former Marine named Cody R Griggers, had been going on since at least 2018. In it they discussed plans for a race war, how to make and modify weapons and explosive charges, and the best way to kill famous liberals. They also made frequent use of slurs and positive comments about the holocaust. Griggers bragged about how his job allowed him to beat young black people and outlined plans to charge as many as possible with felonies to strip them of their voting rights.

According to Griggers’ charging documents, he stockpiled prescription drugs and offered to provide Zamudio with Law Enforcement limited 9mm ammunition and explosives “on par with C4”. By the summer of 2019 , Griggers’ east coast “cell” of Shadow Moses had grown to 4 people and had begun making breaching charges out of Erythritol tetranitrate (ETN) which they appear to have plasticized to make an explosive comparable to c4 or Semtex. Griggers outlined his plans to obtain explosives and grenades and “say I used them in training when I pocketed them.” Zamudio replied “yeah I’ll pay big money for bang an[sic] boom to terrorize la”.

In text messages they discussed how to use a durable water balloon to direct blast energy towards a door that they intended to breach with the explosives. The east coast group also made suppressors for 5.56, .22, and .308 weapons. Griggers purchased a lathe, which he planned to finance by making and selling these suppressors. In July of 2019 Griggers said he was going to create an “AR based system” that included a “select fire standard assault rifle, a suppressed 9mm personal defense weapon (commonly called a submachine gun) with an under barrel 12 gauge shotgun, a belt-fed AR10 (essentially a light support weapon or light machine gun), and some precision long range rifles. Legally, a license is required to make suppressors and weapons and any suppressor or automatic weapon has to be registered with the ATF. In his charging documents Griggers is noted to have had at least 11 weapons.

Although much of the chat focused on survivalism and civil war, Griggers also bragged about the fact that he “beat the shit out of a little n***let” who he arrested for stealing a Glock magazine in August 2019. His colleagues said it looked like the man “fell”. Griggers called it “a sweet stress relief” and added that “I am going to charge them with whatever felonies I can to take away their ability to vote.” Griggers postulated that, in the event of a civil war “I can figure out if my dept is working with the enemy or not, and from there I’m either positioned to maximize damage by attacking from the inside of coordinate efforts to safely identify ourselves as patriots to maximize weapons pointed toward the enemy and minimize friendly fire.”

They also discussed how it would be better to kill “famous liberals” with “a machete so they can’t go the gun grabber route.” Ideally the group would make its actions look like they were the responsibility of Black or Muslim people and hope that this turned public opinion while they pursued a policy of “castrate, kill, remove voting rights and also educate the population. Basically, kill and fuck the enemy out of existence.”

All of these conversations between Zamudio and Griggers were on Zamudio’s cellphone, which the FBI obtained when he was arrested in August. Within a week of his arrest, they had conducted an examination. They used this to obtain a warrant on the 18th of November against Griggers, and in his home they found a short barreled shotgun (also illegal unless registered under the NFA). Griggers also had weapons stored in his Patrol vehicle, including a machine gun with the serial number obliterated.

Both Griggers and Zamudio pled guilty to firearms charges and are facing up to ten years in prison. Both will be sentenced later this summer. Given their plans to “terrorize LA” these charges are relatively light. As of the time of publishing, authorities have not made any statements about the three or more other members of the group.