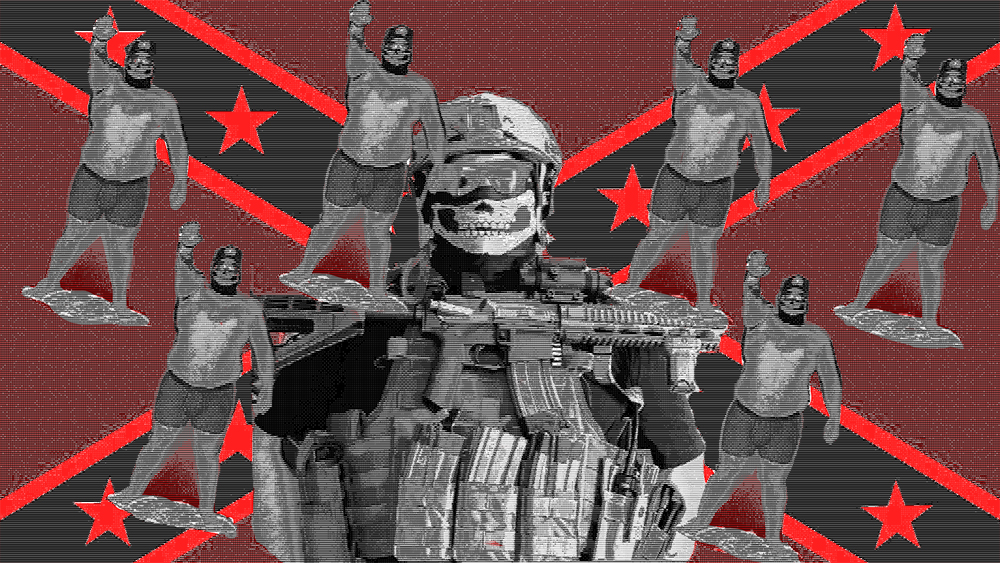 Antifascists announced on Twitter Tuesday that they’d identified Joshua Logan Barham of Searcy, Arkansas, as a member of Christopher Polhaus’s neo-Nazi “The Hammer” network. According to the antifascist research collective “Garfield but Antifascist” or “Garf” for short, Barham is a close friend of Polhaus and part of his ‘inner circle’ and has been since his time as a working as a Jailer in Arkansas.

Barham is a prolific poster on the Hammer network’s chats on Telegram and in livestream chats, where he shared copious details about his private life with his neoNazi friends. Photos include him sitting on his Cub Cadet XT2 riding lawn mower, drinking cheap beer in a bowtie, and showing off his metallic orange “Hammer”-branded sunglasses, complete with Nazi SS bolts on the frame. From there it wasn’t hard to find his Facebook, where he described himself as a “Political commentator. Based. 271,301.” “271,301” is a partial count of Concentration Camp deaths conducted by the Red Cross that Holocaust deniers pretend is the actual total number of deaths. On Facebook, he posed in a t-shirt with the cover of neo-Nazi accelerationist ideologue Mike Ma’s edgy novel “Harassment Architecture.”

According to his LinkedIn page, Barham worked as an intake officer at the Dallas County, Arkansas Detention Center from January 2017 to October 2018. He says he “became Taser certified” on the job and was in charge of medication “for all inmates.” From October 2018 to March 2021, he was a Deputy Jailer at the White County Detention Center. Both jobs were under the sheriffs’ departments of their respective counties. He left the position in March to pursue welding training at the Arkansas Elite Welding Academy in the tiny town of Quitman. He was actively engaging in neo-Nazi organizing at least since he was a jailer in White County.

Barham’s social media betrays not only genocidal beliefs but a fascination with brutality. Aside from posting pictures of himself seig-heiling and posing with an AR-15, Barham shared his copy of James Mason’s neo-Nazi insurgency bible Siege, memes valorizing the Christchurch mass shooter and videos of ISIS executing LGBTQ+ people. One image he shared simply said “Race traitors won’t get human rights.”

Barham is particularly close to Christopher Polhaus, the founder of the neo-Nazi Hammer network. Garf described Barham as part of Polhaus’s “inner circle.” He went by “Scotty Willy” in Telegram chats. His avatar is a photo of himself with combat gear and sunglasses on with a Confederate flag photoshopped behind him. Barham is such a staple in the Hammer chats that he even has his own virtual sticker pack made from photos of himself for their livestream chats.

“It’s extremely concerning to know that a cop, who has a huge position of power over many people, not in the least BIPOC folx, is posting explicitly neo-Nazi content,” Garf told LCRW.

“It points to not only the increasing presence of the extreme right in law enforcement but also a policing system that treats the lives of BIPOC, queer, and Jewish people as less than others. It’s a huge concern and something that continues to get people killed.”

CHRIS POLHAUS AND HIS “HAMMER” GRIFT

“Chris [Polhaus] is really interesting in that unlike other neo-Nazi chat networks that just kind of exist as chats, the whole Hammer network is both tiered and used to coordinate real life action,” Garf told LCRW.

Last December as part of a stickering campaign, neo-Nazi followers of “The Hammer” vandalized an Anne Frank memorial in Boise. Several other related incidents happened across the U.S., mostly on the west coast. The stickers and banners had swastikas and the phrase “We are everywhere” printed on them.

“The whole network is coordinated to encourage neo Nazi acts of vandalism and it’s used as a way to “move up” in the chat network,” Garf said, adding, “Conveniently, all the banners and stickers are sold by Chris Pohlhaus.”

Polhaus, aside from being a Nazi, is a former marine and tattoo artist in San Antonio, Texas. Garf said that “through this merch grift he created a sizable network of people in the online neo-Nazi community and set up a tiered series of chats. He has a core group of about 10 dudes he is close personal friends with, and around 20 more dudes he uses to admin chats. Josh Barham is one of his closer personal friends.”

Polhaus is also connected to the National Socialist Club, a New England-based neo-Nazi group currently embroiled in internal strife because one of its members was arrested on weapons charges and another was on child pornography charges. Polhaus is networking with the group because he wants to build a network or compound in Maine, which has relatively cheap land and lax gun laws. Garf says that Polhaus is modeling the endeavor to move his Nazi buddies up there after other whites-only intentional community projects like Pioneer Little Europe.

“We’re excited to talk with these guys (National Socialist Club), we’re excited to be connected to these guys because of the plan for me and a lot of my friends to move up to the northeast and we’re happy to see people doing stuff up there,” Polhaus said in a livestream on May 2nd.

Hammer members are currently gearing up for a banner dropping campaign on May 25th to mock George Floyd on the anniversary of his murder. Polhaus, of course, expects his Nazi followers to buy the banners for the stunt through him.