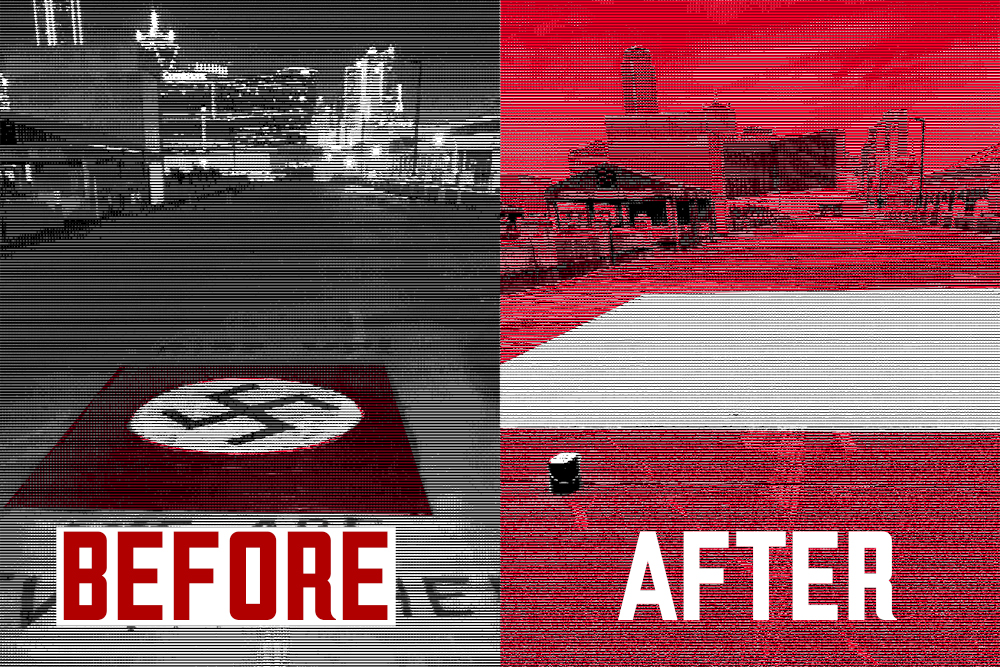 There’s a graffiti war going on in North Texas right now between Nazis and antifascists. Most of it, according to Dallas-area antifascists LCRW spoke to is just Patriot Front, the spinoff of Unite the Right marchers Vanguard America. The group is well known for putting up stickers and not doing much else these days. The uptick in graffiti also stems a bit from the constantly failing White Lives Matter rallies.

But one piece of propaganda caught our attention: a giant swastika painted on a rooftop with the neon lights of the Dallas skyline in the background. Above the swastika was written “rise up!” and below a common Nazi graffiti slogan: “We are everywhere.” The image was posted on a neo-Nazi telegram channel with a quote from James Mason, the author of Siege, a neo-Nazi manifesto that advocates for irregular warfare with the goal of collapsing the U.S. The channel in question won’t be named here so not to advertise the Nazi propaganda they’re spewing.

LCRW analyzed the photo and came up with an approximate location. We then contacted Dallas-area antifascists who confirmed the location for us as an abandoned parking structure downtown.

“They snuck into a condemned parking garage in an abandoned part of downtown. There aren’t office buildings near that would have been able to see it. It was a safe place where they could spend a lot of time doing their little art project and not have to worry about the community member intervention,” the antifascists told LCRW after they removed the graffiti.

The antifascists we spoke to said this was “pretty much just an optics project done by cowards in the middle of the night. They can’t get numbers so they resort to sneaking around with stickers and graffiti like their shitbag brethren up in grapevine.”

Flyering, stickering and banner drops are often used by neo-Nazi groups when public scrutiny becomes too intense for them to try to demonstrate in the open. Going out in public for Nazis usually entails surveillance, if not physical confrontation, from antifascists and perhaps law enforcement. Nazis are certainly more wary of the latter now after public pressure following the January 6th Capitol storming to crack down on white supremacist and other right wing extremist groups. One such case was in February, when Christian Michael Mackey of the neo-Nazi group Iron Youth was arrested in Grand Prairie on weapons charges.

Antifascists LCRW spoke to called spreading propaganda stickers and graffiti like this “optics”—posturing to make it seem like there’s more of them out there than there actually are and therefore looking good to other Nazis who might join their cause. They said covering it up and making sure to deprive it of oxygen is and reducing their ability to recruit.

“If you’re able to do something about it then and there, do it. A can of spray paint to cover it, keep some carburetor cleaner to remove it, keep a razor blade scraper to remove stickers,” they said. “If it’s too big to deal with then reach out.”