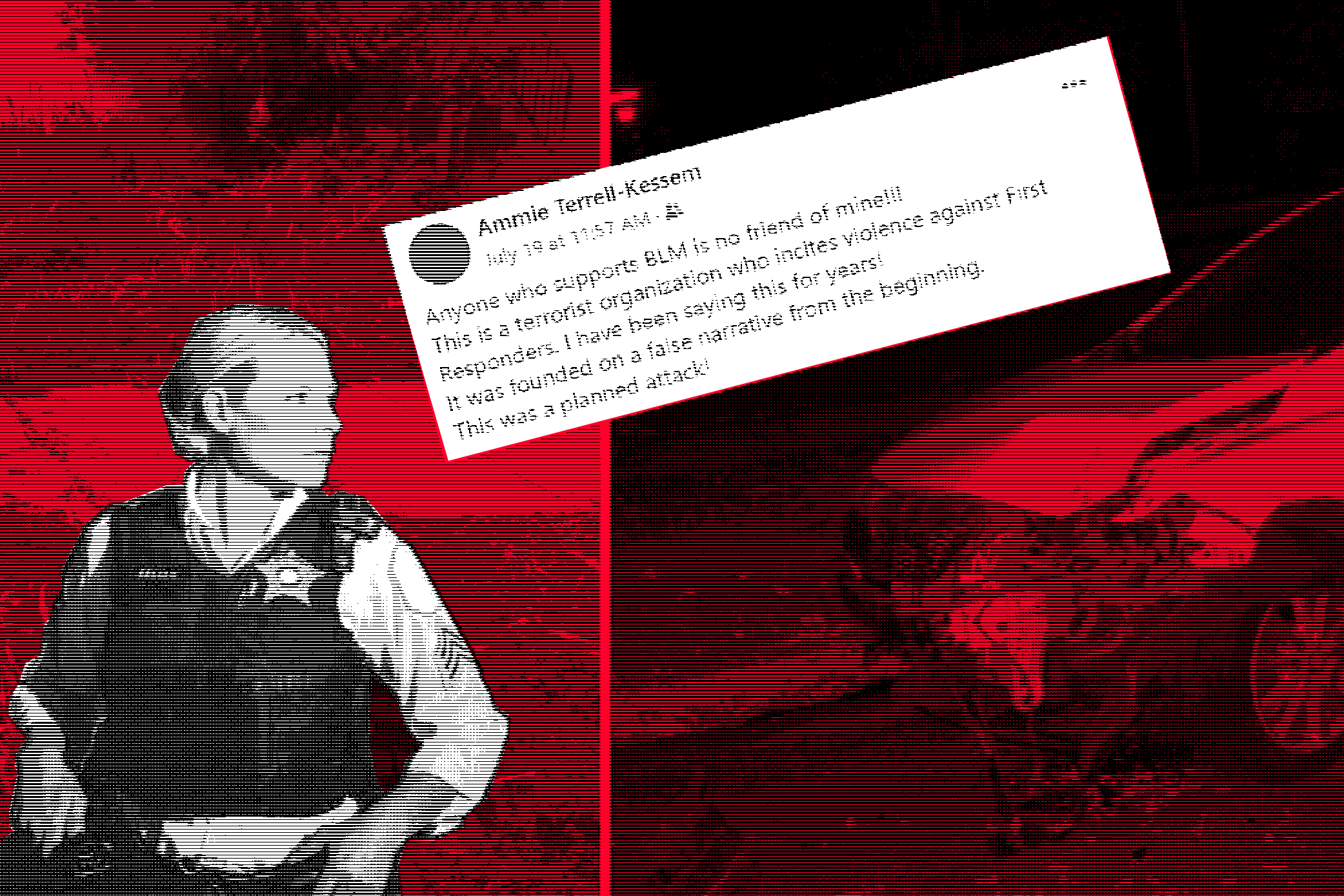 A police Sergeant and GOP committeeperson suspected of trying to help cover up a bizarre politically-motivated car attack on Chicago’s northwest side is under fire for her homophobic comments made on Facebook this week.

In screenshots taken from the Facebook profile of Sgt Amelia (Ammie) Kessem, she accused a library worker of trying to “indoctrinate” her 6-year old child with gay pride decor—and it’s not the first time she’s accused educators of sinister designs on children.

This incident comes less than a year after she helped spearhead a campaign to get a Chicago Public Schools instructor fired for supporting Black Lives Matter protests.

Robert, one of the CPS teachers targeted, spoke with LCRW under a pseudonym.

Last summer, Kessem used her connections both within the Republican party and the Chicago police force to intimidate Robert. The push for his firing, bolstered directly by Kessem’s social media posts, ended in death threats toward him and his family members sent by police nationwide.

But Kessem’s attacks on educators didn’t stop with Robert.

Other CPS teachers, some speaking anonymously for fear of retaliation, have said she and others close to her have harassed them on neighborhood Facebook pages, in person from their vehicles, and with more written complaints to their schools. Some of them originated from known CPD officers.

“I was getting messages from officers in Dallas, New Jersey,” Robert says. “It was like she was like, ‘I’m gonna tell my cop friends across the country you’re a terrorist."

Kessem had shared a photo of herself with her children at a pro-life march also attended by the white nationalist group Patriot Front. Robert re-shared the post to point out the extremist group’s attendance at the march.

Soon after, Kessem began reporting other social media posts of his to his school’s principal—including one stating he was proudly an anti-fascist—and a petition written by a parent at the school he worked started circulating in pro-law enforcement Facebook groups. The elementary school teacher was smeared as a “violent terrorist” and subjected to harassment that continues today.

Northwest side watchdog group The People’s Fabric extensively documented the controversy. The petition calling for Robert’s firing is littered with signatures from active duty and retired police. Comments accused teachers city-wide of indoctrinating children with Marxism, and called for him to be criminally charged for “poisoning young minds.”

“I’m not a terrorist,” Robert says. “I’ve been to two BLM protests. I’m more of a Woody Guthrie anti-fascist type.”

His limited involvement in on-the-ground activism didn’t appear to matter to Kessem, who has taken to Facebook multiple times to condemn BLM and antifa. Kessem said she wrote a letter to the inspector general of Robert’s school. Soon, he was receiving violent messages in his inbox.

Robert was sent photos of family members along with photos of guns pointed at him.

In January 2021, she and other parents threatened to sue the Chicago Teacher’s Union over delays in school reopening negotiations. Kessem was featured on FOX News again in February billed as a “concerned parent.” The network did not mention her role as an elected GOP committeeperson in either appearance, or the fact that she ran for and lost her election for IL State Representative for the 19th district.

As 41st ward GOP committeeperson, Kessem actually wields a small amount of influence in the Cook County republican party in addition to her power as a sergeant.

The ultraconservative Chicago GOP recently voted to censure Illinois Congressman Adam Kinziger in response to his impeachment vote against President Trump. Kessem isn’t just responsible for driving voter turnout and appointing election judges on the Republican side of the ballot—she also gets to vote to endorse candidates statewide and nominate people to vacancies within the party. She’s also not the sole cop in Chicago elected to the role.

Some GOP committeeman spots remain vacant, which isn’t surprising in a city dominated by Democratic politicians that has struggled with conservative voter turnout. But for those who want to rub elbows with the powerful in Illinois’ Republican party, it’s an attractive position. Additionally, the gig puts Kessem in a position to connect politically with Chicago’s northwest side aldermen, who have repeatedly organized large “Back the Blue” rallies outside the 16th district station where Kessem is assigned.

Those events have attracted members of right-wing hate groups from both the city and Chicagoland suburbs, including Proud Boys and accused Capitol rioters.

Kessem, who serves as Vice President of the Northwest Side GOP Club, denies any connection to far right or militia groups.

At least one Chicago cop with militia ties is also a member of the NWS GOP Club. Stefanie Mingari, 38th ward Captain and avowed anti-vaxxer, is married to officer Kyle Mingari, who was seen wearing a “Three Percenters” group logo while on duty last June. Kessem and Stefanie Mingari have attended anti-abortion rallies together.

People identifying with the Three Percenter movement are implicated in the deadly January 6 riot in Washington, DC.

Along with several other police officers out of the 16th district—including failed Cook County Circuit Court candidate and CPD Lieutenant John Garrido—Kessem was also at one point listed as a member of a right-wing Facebook group that idolized Kyle Rittenhouse by using him as their banner photo.

Members share dozens of racist/homophobic/otherwise offensive memes a week. Her membership in the private group only recently disappeared along with the rest of her Facebook profile.

Fast forward to this week, when Kessem posted a screed about LGBT librarians at her local branch. She accuses one of trying to “indoctrinate” her child with pride decor in allegations that echo the ones she made last year against both public and private school teachers.

Attacking schools and librarians with allegations of indoctrinating children with left-wing views is hardly unique to Sergeant Kessem. At this moment, right wing groups across the country are coordinating to force the fake issue of teaching “critical race theory” in schools. “Concerned parents” like Kessem have flocked to school and library board meetings to air their grievances against liberals and call for a ban on CRT.

In some states, they’ve already succeeded.

A CPD spokesperson says an investigation has been launched into the comments.

It is with this long standing pattern of intimidation, harassment, and offensive social media posts in mind that neighbors view Kessem’s behavior in response to a vehicular attack in Jefferson Park with great suspicion.

When Czosnyka saw Sergeant Kessem arrive on scene, he immediately had doubts that justice would be served. He and others in the ward were aware of her history.

The attacker, now named as 49-year old Maureen McGlade, drove by Czosnyka’s house earlier in the day and cursed at his wife, telling the couple to stop “following the alderman.”

Hours later, in the dead of night, her SUV came thundering into his yard. Czosnyka gave officers a clear license plate number from the vehicle, but no arrest was made for days after the incident, prompting neighbors to flood police with complaints.

Pete and neighbors had already identified the driver, who was listed as a friend of Kessem’s and Lieutenant Garrido’s on Facebook—and was tagged in posts alongside them both dating back at least two years. Her brother is a retired Chicago police officer.

Czosnyka has been a longstanding critic of corruption in the neighborhood, which is emboldened in no small part by area officers, he believes. He has frequently spoken out against Alderman Jim Gardiner, who is being sued by a construction worker with allegations that the alderman and his cronies harassed and falsely arrested him over returning a lost cell phone. Residents allege that Gardiner might be connected to other acts of retaliation against critics in the 45th ward as well.

“I feel like I’m perceived as a threat to their political power,” Czosnyka says.

In the aftermath of the vehicular attack, McGlade posted to her own Facebook page.

“I’m thinking this is going to be my summer of love. And by love I mean vigilante justice,” she wrote.

In response to her investigation on this story, associates of Kessem posted photos and other identifying information of LCRW’s reporter on social media in an attempt to threaten and intimidate her.