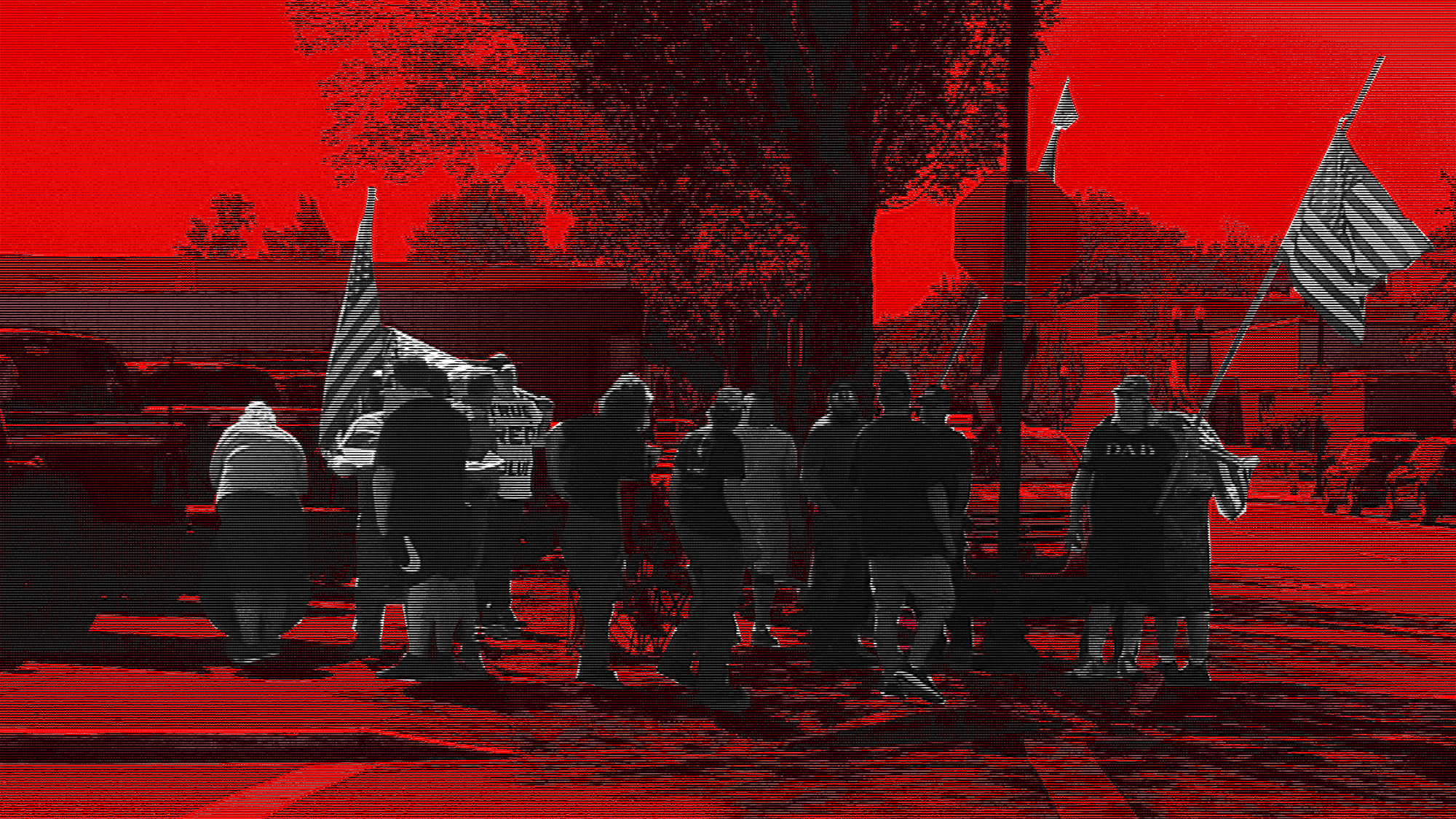 I got to the plaza in front of Springfield Library/City Hall right around 4 p.m. on Wednesday when the anti-mask, anti-vaccine, anti-critical race theory event hosted by Rob Davis and local real estate agent Amanda Crosswhite was supposed to start.

Davis has been a constant presence throughout Eugene, Springfield, and Salem, Oregon, mostly organizing pro-Trump events.

One of those present at this event was Tim Davis, a violent white supremacist who is a member of The American Patriot Society, was also present at the U. S. Capitol insurrection.

As I arrived, there was, ironically, a vaccine clinic closing up in the plaza. Two Springfield Police Department officers stood around and talked. Meanwhile, across the street, a group of 20-30ish right-wing protesters were gathered in the corner lot— including Richard Elce, who has repeatedly threatened and assaulted both press and protesters.

In a video from Sept. 30, last year Elce can be seen trying to injure independent journalist Michael Adams with his flag pole.

On Jan. 9, he participated in a brawl in the intersection in front of the federal courthouse. In one video, he can be seen thrusting his flag pole into somebody laying on the ground. He later threatened independent journalist Adam Costello, again with his flag pole. He was arrested later that day by the Springfield Police Department and currently has charges for two counts of reckless endangering, one for possession of methamphetamine, and one for criminal mischief in the second degree —- all misdemeanors.

As the antivaxxers arrived, the cops left.

Smoking my cigarette and seeking shade, I went under the overpass into the utility parking area and stumbled upon another group of about 20ish people at the city’s school district administrative building. One was across the street being interviewed by KVAL. They got done and I spoke to the KVAL reporter for a minute and exchanged pleasantries. She then left.

The other crowd at the parking lot is getting bigger. About 20-30, so far.

At least two of them flipped me off right after taking the photo 🤷‍♂️😅 pic.twitter.com/QQu9d3S8zF

Within minutes of her walking away, I saw that the other group from the corner lot was marching on my side of the street towards the other part of their group who were standing in front of the school district building. Many of them held signs about keeping critical race theory out of schools and mask mandates.

Every single person besides Richard Elce and some other man I can only describe as “crazy eyes” walked past me. These two, however, began to closely circle around me, I think as an attempt to disorient me. The one guy just kept staring at me with his big, bulging eyes.

It didn’t work and I asked how their day was. “Crazy eyes,” who visibly looked drugged-out, said something that I don’t recall and then asked who I was with. As soon as I said Double Sided Media, the two of them got more upset. “Crazy Eyes” said something along the lines of “fake press,” and they walked away momentarily but not before Elce told me not to photograph anybody.

Continuing to smoke my cigarette, I didn’t move from where I was at all. I was on the corner of the street across from the school building.

I don’t even think it was a minute later when Richard Elce walks towards me and says “I think it would be wise for you to walk away.” Knowing I was largely outnumbered and the only member of the press there by this point, I agreed and stated “sure, I’ll walk away. No problem.”

As I was doing so, Richard got closer, walking faster towards me with “Crazy Eyes” right beside him.

Richard stopped and “Crazy Eyes” continued to follow me for another 20-30ft. He was yelling things like “stop spotting us,” and “stop spotting,” which I still don’t understand. The last thing he said before I got far enough away was “if you ever come back, it’ll be the last thing you do.”

I got in my car, drove a few blocks outside of the immediate scene and sat in my car trying to digest what had just happened. That’s when I did my video recording posted to Twitter, viewable below

I'm out of the immediate area and this is my recap of what just happened. pic.twitter.com/QeEGzkxbTU

In retrospect, I think this was the most dangerous situation I have found myself in so far. I say this because I was entirely alone and with a bunch of people who still think that “the press is the enemy of the people” Some of them have been known to be under the influence of drugs, too, adding to the unpredictability of what could happen.

Had anything happened to me, there would have been no one there to document what had happened or help me. This speaks to the important role of the mainstream media and their obligation to stick through the entirety of events. They’re allowed to be there, record video, and interview people. Meanwhile, I can’t even smoke a cigarette in the corner away from everything without being threatened that it’ll be the last thing I ever do.

Showing up, getting eight-to-ten minutes of B-roll footage or interviews and then running off leaves independent journalists, who don’t have major financial or institutional backing, left to fend for themselves.