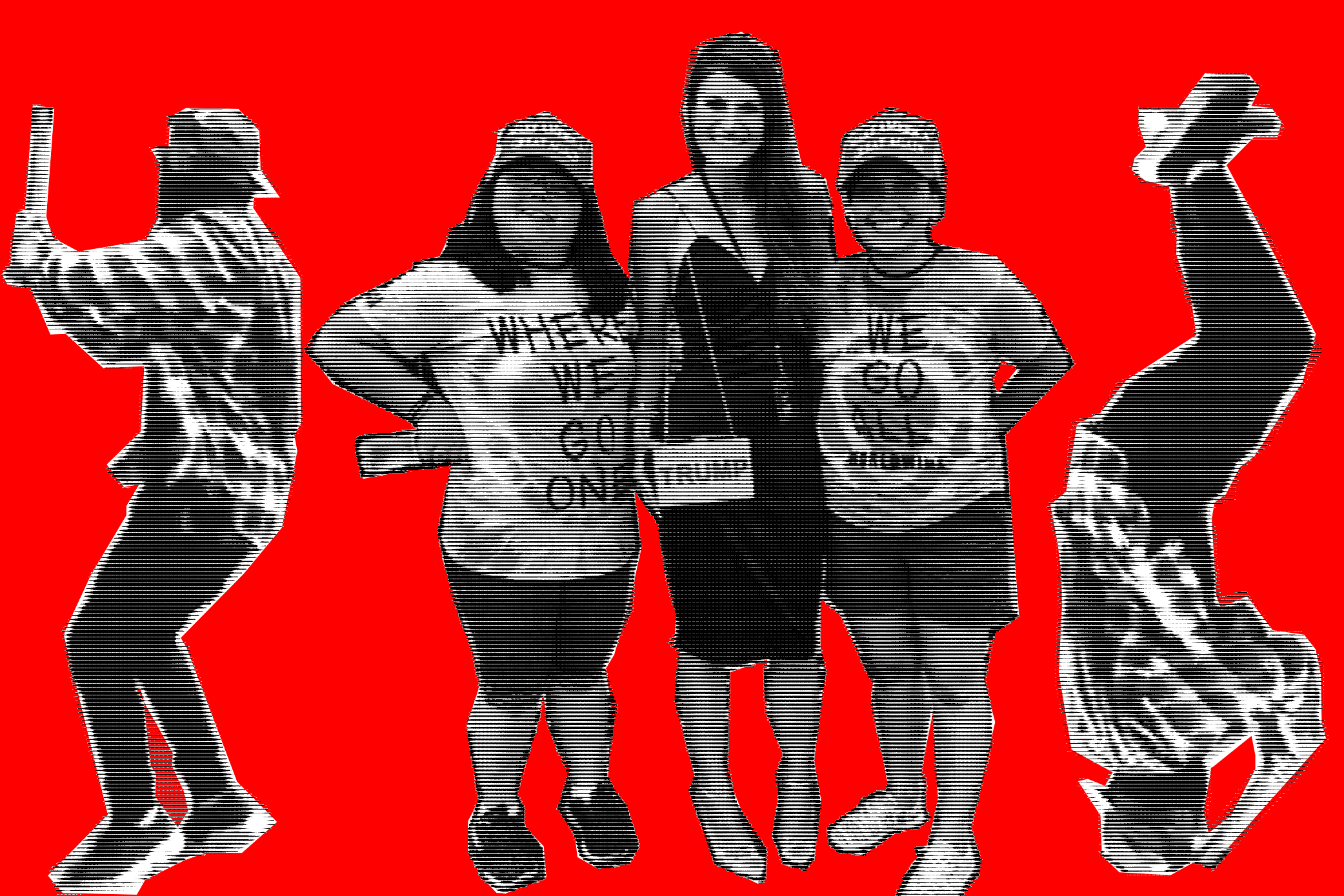 EDITOR'S NOTE : Waterspider films and writes about right-wing chaos in Los Angeles. You can support her work on CashApp: @AWaterspider

Republican candidate for California governor Sarah Stephens wants to “Make America Gold Again.” Her campaign website states that she will “bring the PROSPERITY back to California on EVERY LEVEL! Just like the GOLD RUSH times.” The “on every level” part is unsettling because Stephens advocates the ideals of her associates including Qanon scammers, violent Trump supporters, anti-mask/anti-vaxx protesters, and other assorted Californian right-wing extremists.

A group of Los Angeles right-wingers including Sarah Stephens promoted a transphobic protest at WiSpa, a Korean spa in Koreatown, LA. Previous to the protest, a viral video taken by semi-anonymous Instagram user “cubanaoangel” shows her shouting at WiSpa front desk associates for allowing a transgender woman into the women’s locker room, which is legal in California. The incident was considered a hoax according to most, including LAPD, due to lack of any other evidence that this happened. With that knowledge available, local right-wingers still promoted the WiSpa protest, including Stephens, who intended to use it as a platform for her governor campaign.

The protest on July 3rd was total chaos. A group of pro trans rights’ counter protesters surrounded the entrance of WiSpa, which was closed that day, before the transphobic right wingers showed up. As the right wingers appeared, non-stop violence occurred.

Journalist and documentarian Rocky Romano was lucky to be wearing a helmet that day. Local right wing extremist Aaron Simmons, who had his face covered in a kufiya, ran up out of nowhere and slammed Romano’s head with a metal baton.

Aaron Simmons, a Proud Boy associate, smashed journalist Rocky Romano in the back of the head with a metal pipe during last Saturday's transphobia rally in LA, before running away. pic.twitter.com/ULS5JRYrRy

Simmons quickly jumped into a Ford Explorer conveniently parked a block away from where he bashed Romano’s head; in a video of the escape into the car, you can hear Simmons say, “that felt so good cracking him in the head though.” The getaway vehicle for one of the most violent local right wing extremists, Aaron Simmons, belonged to Stephens. She was driving.

This is at the “ protest” staged by fascists ( most who I have photographed, and one who assaulted me earlier in the year) at the Wi Spa in LA. One of them (Aaron Simmons) had just hit a journalist in the head with a pipe.

Other than the Romano incident, which he was able to film himself, there were: two stabbings by an unknown local right-winger in bloc, threats with a bat by a right winger named Bryan Tyree, a woman was punched by an unknown local right winger, and plenty of street brawls that day. Quite the event for Stephens to be associated with as a Republican candidate for California Governor.

Stephens’ has been involved with right-wing violence at least since the start of her campaign in February 2021. In April and May, she promoted the violent Tinhorn Flats protests and indicated her past involvement in similar protests on her Instagram.

“This promises to be another rousing powerful event reminiscent of Sarah’s protest days!” she wrote on an Instagram post dated May 21, 2021.

Tinhorn Flats was frequently in the news from April to June due to right wing protesters outside of the restaurant harassing and getting into fights with bystanders, as well as several arrests, including the son of restaurant owner. Tinhorn Flats repeatedly defied COVID-19 restrictions and stayed open for the majority of the pandemic; eventually, the place was shut down for good. Stephens promoted the protests and posted pictures on her Instagram page at a time when neighbors were worried about leaving their homes.

Stephens also attended Qanon rallies in March of this year and, as recently as June, posted a picture with two women wearing shirts with the QAnon slogan “Where We Go One, We Go All” on her Instagram. In the caption of the photo, she writes, “They are a part of the SAVE OUR CHILDREN movement that is rising in the United States!” Stephens appears to claim an organizational role in the rallies, asking readers to message the “Make California Gold Again” team to “find out more about SAVE OUR CHILDREN and the rallys [sic] we do in Hollywood.”

In the past month, Stephens became involved with the anti-mask/anti-vaxx mandate protests at school board meetings in Southern California’s. The protests have caused an uproar among parents; parents in Palos Verdes even started a petition in opposition to the anti-mask/anti-vaxxers. A group of conspiracy theorists that tend to lean far right developed a playbook for their demonstrations: they go to school board meetings all over Southern California counties and cause a scene by refusing to wear masks. The conspiracy group, which includes a lot of children, calls their project “Let Them Breathe.” Besides being a racist, mocking reference to police killings like that of George Floyd and Eric Garner, it is a disturbing message involving several young children waving posters that say, “unmask our kids,” “let them breathe,” “my body, my choice.”

On August 11, the group crashed a Palos Verdes school board meeting after rallying at an intersection up the street. Stephens was one of the speakers that day alongside Jeffrey Barke, a physician who was rebuked by a local hospital after posting a video of himself waving a gun around and saying a gun offers more protection against COVID-19 than a facemask. Some among the group of “concerned mothers” were opposed to people, like myself, filming at the school board rally. At one point, they told me to take a step back into the main road where cars were driving by. One counter protester held a sign calling Jeffrey Barke a Qanon scammer, several of the “concerned mothers” spent the majority of the rally trying to cover up his poster. When Stephens shot a glance at the counter protestor’s poster, she also tried to have a word with him.

The school board meeting room is packed with anti-mask, anti-vaxxers. Not a single person has a mask on. pic.twitter.com/iDA0J8TkME

Stephens declared to run for governor of California in February 2021. The same month she promoted the American Liberty Forum with covid denialism speaker, Peggy Hall. In May 2020, Hall posted videos explaining how to get out of wearing masks with bogus medical and legal exemptions. In February 2021, Stephens also promoted a California “Special Event” that hosted Dr. Judy Mikovitz of conspiracy video “Plandemic” fame and “business owners who remained open during the shut downs.”

Despite all her “grassroots” campaigning, Stephens is a long-shot candidate. Recall polls don’t even ask voters specifically about her, instead looping her in the “someone else” category along with about 40 others.