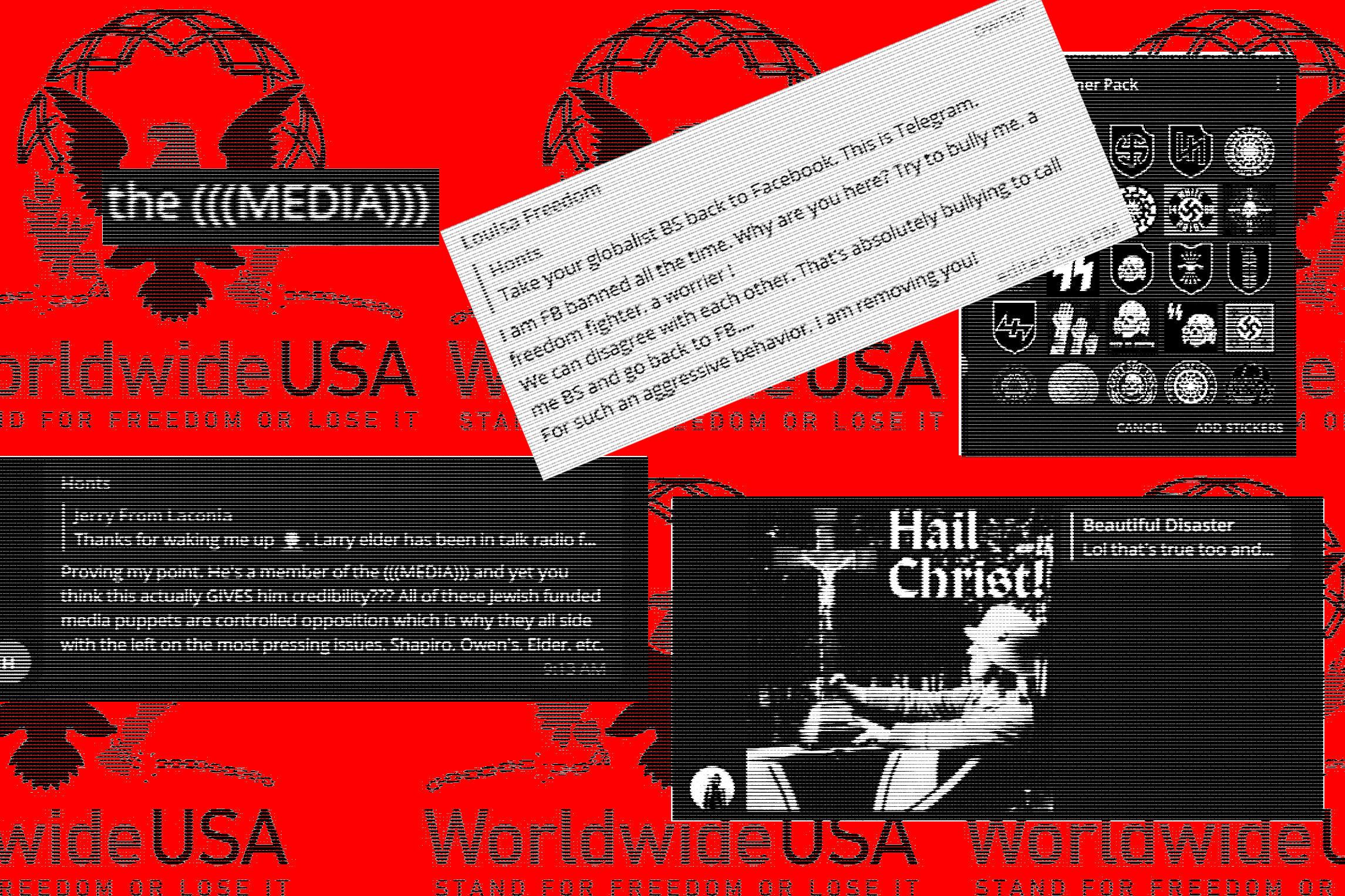 The organizational chaos around the ‘Worldwide USA’ anti-lockdown protests has taken a bizarre new turn. Following the recent delisting of state and regional groups from the national umbrella group, organizers are now attempting to right the ship, while accusing their co-admins of sabotage.

In a statement posted to the Worldwide USA group on Telegram earlier today, ‘Gina’ a hitherto rarely seen administrator posted the following:

_Dear Members, In July, we brought “Carolina Bonita” on board to help us oversee the state groups because she presented herself as someone with the right background and also trustworthy. Last week she decided to “improve” our group security system, without being asked, which corrupted our welcome bots in 48 states. She has also blocked me and Harry from any groups that she opened and took contacts of our admins and members with her. She is now carrying Worldwide USA as if it is her own brand, and left everything in disarray. Carolina and her fellow mutineers continue to disparage us both with unfounded claims, supposition and innuendo in a continuous effort to convince other remaining admins to join them. As a result of this, we will be reopening the following state groups and do the same for groups that have blocked us. The United States of America will not be divided and we will continue to move forward._

Thank you for your patience and understanding. Harry & Gina

‘Carolina Bonita’ operates several groups on Telegram in addition to her, ah, duties as an administrator of ‘Worldwide USA’. It appears that she is traditional Catholic (aka ‘TradCath’) whose motivations for opposing lockdown, vaccine mandates etc. may differ substantially from the original organizers.

An extensive investigation by Logically.ai published earlier this year indicated that the ‘Worldwide’ demonstrations were originally organized by a small group of activists in the

That first demonstration in Kassel turned violent, with anti-lockdown protesters attacking police. If the name of the town seems familiar, you may recall that Kassel, a city in the German state of Hesse, has been an epicenter of neo-Nazi organizing activity in recent years. In 2019, Walter Lübcke, a pro-migrant German politician was assassinated at his home in a suburb of Kassel – the first known political murder by believers in Nazism since 1945.

Just weeks later, supporters of a German political party called simply ‘The Right’ proposed to march in Kassel to protest what they whined was the unfair treatment of their movement following the outcry over the assassination. 500 neo-Nazis were supposed to attend, but they failed to show after 8,000 took to the streets of Kassel in an angry counter-protest.

Earlier this year, neo-Nazi Stephan Ernst, who fired the fatal shot, was convicted and sentenced to life in prison after a long trial where he confessed to a ‘cruel and cowardly’ act and apologized to the family of his victim, but without recanting his hateful ideology.

The latest split in the movement may be a continuation of the tension between the original German organizers and a different faction based in Canada that have sought to take the protests in their own direction. ‘Harry1984’, mentioned in our previous report, also promotes or manages a large file store of conspiracy theory materials that was assembled in late 2020, with almost all the content being mirrored in both English and German; the ‘Share Facts’ Telegram wrapper typically posts everything in English, German, and Spanish. It seems reasonable to assume that ‘Harry’ is connected to the original ‘Worldwide’ organizers in Kassel.

‘Carolina Bonita,’ meanwhile, joined Telegram only last January, and her personal channels there have only a few subscribers. It’s unclear how she managed to talk her way into being the administrator of a large and (previously) well-run international political coordination network. Perhaps they were swayed by her Instagram reach, where she boasts almost 10,000 followers for her flavor of Mexican-American traditional Catholic activism.

She also promotes ‘Catholic Panel’, a TV production company headquartered in Texas, whose CEO is Carolina Galvan and which is currently producing promotional material for a Catholic youth camp in Colorado. Alas, the marriage of the ‘Worldwide USA’ online social network with the tradCath trad media outlet seems to have ended in unhappy recriminations. LCRW eagerly awaits the next phase of this slow motion train wreck.

As for the ‘Worldwide California’ group, it continues its rudderless drift. with most members appearing not to even notice that they were cut out of the national organizing. More and more spam piles up while the group administrator is diverted by petty slap fights with open neo- Nazis over which GOP nonentity candidate to support in the recall election.

memes, but for ‘bullying’ her by suggesting that she go back to Facebook. In the process, she revealed that she is frequently banned from Facebook, which might explain why their organizing and recruitment efforts there have fared so poorly.

"_I am FB banned all the time. Why are you here? Try to bully me, a freedom fighter, a worrier ! We can disagree with each other. That’s absolutely bullying to call me BS and go back to FB....For such an aggressive behavior, I am removing you!_," 'Luisa Freedom says to an open neo-Nazi.

Alas for Louisa, her Telegram channel administration skills fell short of her ambitions and hours later her antagonist was still in the group and taunting her inability to remove them.

Amusing as this is, the sad fact is that ‘Louisa Freedom’ was happy to ‘disagree’ about blatant antisemitic and anti-immigrant bigotry and only attempted to remove a Nazi because he had hurt her personal feelings. Like many who have become involved with ‘Worldwide’ and the Qanon movement before it, Louisa may simply be a foolish or misguided person who doesn’t think of herself as a bigot or hate anyone. But her weak-kneed acceptance of others’ bigotry is the open door that allows Nazis to conduct their entryist recruitment strategies and drag crowds of people farther and faster into their totalitarian ideology.

None of the regional chats have yet been reconnected to the national network, and on past form it seems possible that the ‘Worldwide’ organizers will simply terminate existing channels if they can, or set up brand new ones and pretend the problem never happened.

The ability to quickly coordinate and direct organizing in scores of countries and hundreds of cities around the world is a powerful political tool. It’s increasingly apparent that there’s a struggle taking place between different factions seeking to wield it, and – like all fascist movements – greed for power threatens to tear their organizations apart.