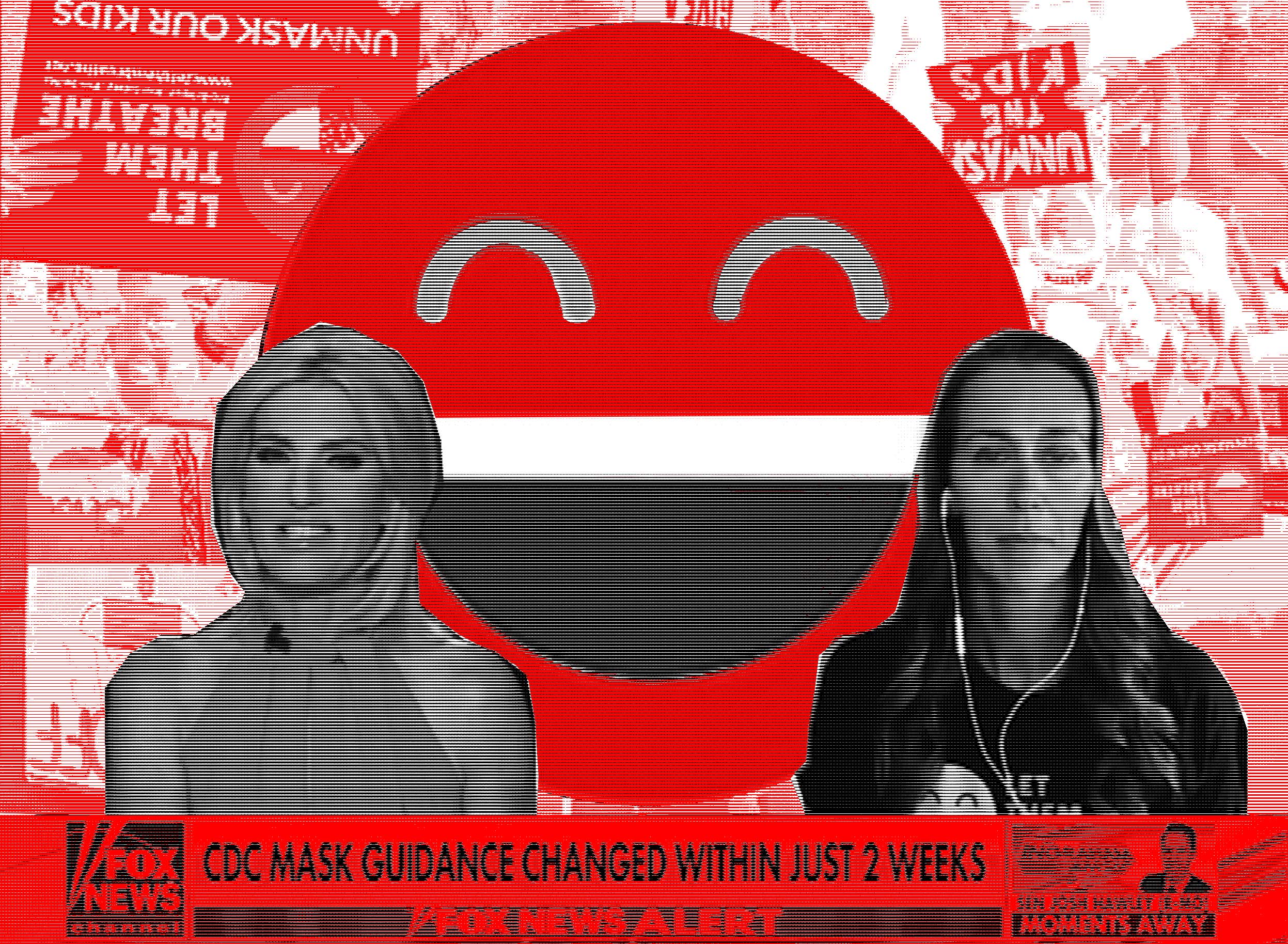 EDITOR'S NOTE : Waterspider (she/her) films and writes about right-wing chaos in Los Angeles. You can support her work on CashApp: $AWaterspider. Desertborder (he/him) is a journalist and researcher based in LA. His Cashapp is $FuckGarcetti.

San Diego-based organization Let Them Breathe gained attention rallying and disrupting school board meetings up and down California since June of this year. The organization’s founder, Sharon McKeeman, allows far-right extremists to speak at her events and collects dark money from a GoFundMe page tied to her organization. As of today, she has raised over $126,000 on the page. The group averaged three rallies a day over the past month, holding more than 90 California rallies in August alone.

According to McKeeman, the growing group includes 12 thousand “parents who are concerned about the detrimental effects of masks.” Although the organization’s Facebook page contains over 18 thousand followers, the rallies rarely draw more than a few dozen and the same parents and children have attended several school board meetings in different districts.

The protest tonight at Palos Verdes school board meeting is apart of a bigger scheme organized by Arthur Schaper. Two days ago he is pictured with kids holding posters with the same handwriting at the Torrence Unified School District meeting. pic.twitter.com/0GGj2PqW8A

The GoFundMe page, intended to raise money for a legal battle against the state to end mask mandates, claims over 1.3 thousand donors. Of sixteen donors that contributed more than one thousand in the last month, ten are anonymous including the top donor, who gave ten thousand dollars.

The GoFundMe is not the organization’s only source of income. On Let Them Breathe’s website, McKeeman sells tote bags, clothing and stickers emblazoned with the Let Them Breathe logo. She also sells Let Them Breathe yard signs for $41 a piece, or in packs of 25 for $555. On her personal website, she offers a “Home + Schooling Getting Started (or going deeper) Video Guide” for $20 per download.

The GoFundMe donations are intended to support a lawsuit Let Them Breathe filed with Reopen California Schools, an organization that has advocated for schools to “fully” reopen since the first COVID-19 shutdown. The lawsuit challenges the state’s mask requirement, asymptomatic testing, and close contact quarantine guidance for K-12 schools. The organizations claim to “advocate against the state’s erroneous school closures and arbitrary operating protocols.” Ironically, the group itself has been responsible for several school board closures, forcing board meetings to shut down when they invade en masse and refuse to wear masks.

LCRW attended a Let Them Breathe protest on August 11, 2021 at the Palos Verdes Peninsula Unified School District in Southern Los Angeles County. In a small park close to the board’s meeting room, children carried signs reading “My body, my choice” and rowdy parents shouted “Let them breathe!” After the demonstration, the group stomped over to the PVPUSD board meeting to protest the mask and vaccination requirement for students. Board members announced the mask requirement in the schoolroom, but every protester refused to put one on. The meeting was promptly cancelled and the whole room ignited. Parents yelled they “want the best for their kids” while pointing and laughing at the few people in the room wearing masks.

The school board meeting was cancelled because masks are required indoors the school and everyone in the audience (the anti mask, anti-vaxxers filled up the seats) refused to wear one. pic.twitter.com/kYKzPUKBqW

It wasn’t the only time Let Them Breathe disrupted a school board meeting. The following day, McKeeman led a protest at Vista Unified in San Diego county. She attempted to enter the schoolroom without a mask because of a “medical exemption,” but she was immediately kicked out and a school official locked the door behind her. Earlier that month, San Ramon Valley Unified School Board, about 30 miles East of San Francisco, shut down a school board meeting five minutes after it started when Let Them Breathe protesters refused to wear masks. Antimaskers shouted “Cowards!” at the school board members as they left the schoolroom.

“It feels hopeless as a parent for a school board to be able to cite guidance incorrectly and shut down a meeting over a mandate that does not exist,” McKeeman said in a statement to local news after the Vista Unified protest. “It feels incredibly unfair as a person who is medically unable to mask for a school board to fail to honor my medical exemption and discriminate against me. It’s heartbreaking to know our kids are going through this daily; that’s why as parents we must keep advocating for them.”

In August 2021, the group organized or promoted at least 92 different school-mask protests at school board meetings in California, according to LCRW’s analysis of posts on its Instagram page. The protests spanned almost the entire state, ranging from Redding in the north to Coronado in the south, and east into Joshua Tree and the Central Valley. Each protest was promoted with the same flyer design, featuring an exuberant smiley face and the words LET THEM BREATHE UNMASK OUR KIDS.

The individual protests have earned local media coverage many times, but reporters routinely fail to make the connection that the various school-board demonstrations are centrally coordinated by a single group. Even statewide papers like the LA Times have mostly missed the story, identifying the group’s participation in the anti-mask lawsuit but neglecting to note their role in the statewide protest campaign and referring to the group simply as “a San Diego-based parent group.” The San Diego Reader, an alt-weekly, nominated the group as a finalist for “Best Local Activist Group” in their 2021 Best Of poll.

One San Diego news station, KUSI, has positioned itself as a champion of Let Them Breathe’s cause, featuring dozens of interviews with Let Them Breathe members who often spout anti-mask pseudoscience with no pushback from KUSI’s reporters. Typical KUSI stories on the group include “‘Let Them Breathe’ group says masking children does more harm than good” and “Let Them Breathe’s goal is to unmask our kids and recall our governor.” A search of KUSI’s website turns up more than 30 stories about Let Them Breathe in the past month, all of them positive. Fox News host Laura Ingraham, famous for parroting white-nationalist talking points and promoting neo-Nazis on national television, featured a friendly interview with McKeeman at the end of July.

McKeeman’s events have also attracted far-right extremists. Arthur Schaper, who leads the California chapter of SPLC labeled anti-LGBT hate group Mass Resistance, spoke in the park before the Palos Verdes board meeting. Schaper has also attended at least one other Let Them Breathe demonstration, in Torrance, California. Sarah Stephens, a QAnon candidate for California governor and getaway driver for violent far-right extremist Aaron Simmons, promoted the Palos Verdes event on her social media pages and spoke in the park that day. Jeffrey Barke, a quack doctor who was shunned from the medical community for waving a handgun on his livestream and saying he’d rather people carry concealed weapons than wear face masks, also spoke at the Palos Verdes rally.

Qanon scammer “MD” Jeffrey Barke tells the board member who cancelled the meeting (d/t no one wearing masks) that he should worry about obesity rather than COVID-19 pic.twitter.com/1N9sfoYT4g

McKeeman and her group show no sign of slowing down. As of the time this article was published, they have planned at least 28 protests for the month of September throughout California.