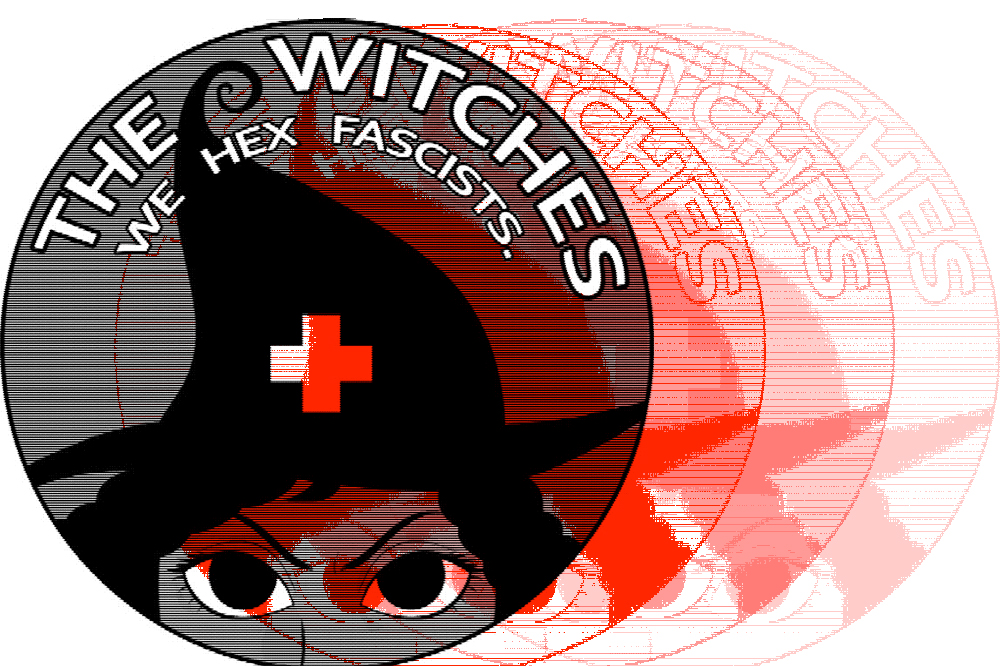 At one point during our conversation, Rosa cleared her throat.

Rosa is a lead organizer with The Witches PDX. She spoke to LCRW about the group’s mutual aid work, the brutality of the state and federal law enforcement’s response to the now over 50 days of continuous in Portland and the shared experiences both of trauma and kinship during the daily assault by police.

LCRW: So first thing I wanna ask is–tell me about what your organization does, because it sounds fuckin’ awesome.

ROSA: Thank you! So we call ourselves The Witches. We are the Portland branch. We are very loosely associated with a couple of other organizations based in Portland [among them is Riot Ribs.]

We started off as a coven of witches who are interested in arts and activism. We use ‘witch’ in the broadest way possible. If you identify as spiritual, if your ancestors, Mother Earth–if you have a specific practice that involves your ancestors–you know, basically anything “witchy”–we respect and we value nobody’s spirituality over another person’s in the group.

So here we are, we’re gathering and we’re interested in activism and we start to–we start growing and growing and we’ve got a presence. And we go to the first night of protests for George Floyd here in Portland and we were met with extreme violence. We decide to mobilize. At first we focus on snacks–on bringing water and snacks to people because we see that as a need. A lot of people protesting are under 25. They’ve been out of work for a long time because of COVID. They need to make sure to keep their energy up because dealing with the harassment and the violence that the Portland Police Department unleashed on us was exhausting. So we wanted to make sure that everyone was fed and had something cold to drink after dealing with teargas. Since then, we have spread out and we’ve branched into many different avenues of supporting protesters and the houseless community as well as domestic violence victims.

LCRW: So there’s been 50 plus days of these protests and assaults by police in your city and I just wanna say–how’s that shape the way you’re doing things and how’s that like–what’s been happening in general? I guess that’s my first question is–what’s the shape of your work taken particularly because there’s been poilce brutalizing people daily?

ROSA: I think the first thing to address is something we’ve called ‘the normalization of fear and violence.’ That’s because it’s become normal to us. At a certain point you become used to a certain level of violence and you come to expect it. With that, you get a little bit of a tougher skin when it comes to it. It still hurts–you know, we’ll all have PTSD after this. We are having–everyone in our group has been physically injured at one point or another–in a serious way, a lot of them. It becomes almost comical. It’s so ridiculous it almost becomes comical.

LCRW: That’s pretty much what I’ve been hearing from folks so far is just–kind of unreal element to it. I’m wondering if you can elaborate on that a bit.

ROSA: I think an excellent example would be the ‘teargas and chill.’ You know the ‘Netflix and chill’ thing that’s been said a lot. The ‘teargas and chill’ is something we’ve been saying for a while and that’s kind of exactly what we’re doing–We’re hanging out, we’re supporting what we believe in, we’re putting our feet on the ground, our money where our mouth is and we’re then being brutally attacked and systematically harassed by–now the federal government as well as the Portland Police Bureau. To add a fresh level of hell onto that–

At this point the call disconnected. We quickly got back on the line.

LCRW: You were talking about when the federal agents came in and there’s some specific attacks you were telling me an anecdote about or starting to–

ROSA: Yeah, the feds came in and to be honest, their tactics are not that different from what we’ve been facing from the Portland Police Department and from the associated departments that have been very active in working with the Portland Police Department–Bureau. So having the feds come in didn’t really make things that much different. There’s kind of an added level of intensity because they’re using a much more toxic gas and much more painful munitions, which I have personally seen–which are very scary; and the targeted raids that we’ve heard about and experienced.

LCRW: Well, I don’t want to retraumatize you by making you recount it in too much detail, but if there’s anything like, particularly–maybe I should phrase it this way: Has there been anything that’s happened during these nights of protests that hasn’t been addressed enough?

ROSA: I think the biggest thing is the drones following individuals home. The police department says they aren’t using drones as a way of surveillance as well as the individual knocks on peoples’ doors and intimidation tactics. We have frequently had police park outside our apartments or where we meet or circling the block when we have a public meeting. That’s pretty intense–that kind of level of harassment.

I think another thing that needs to be addressed is the use of the kettling and corral techniques. To tell a personal story, I went to see if I could evacuate some friends and members of our organization the other day. There was police, feds, ICE, FBI–it seemed like every organization under the sun was out combing the streets looking for stragglers at the protests. And you know, when they found them, they beat them with batons. They’d arrest them or they’d just harass them or take their items from them. We’ve had almost all of our items confiscated at one point or another.

LCRW: I presume this would include like–um I don’t mean to pry into your spiritual practices, but would this include objects that are sacred to you and people in your group?

ROSA: Yes, absolutely. From me, personally, my great-Grandmother is extremely important to me and I had her rosary in a cart that was confiscated. I’ll never get that back.

LCRW: I’m wondering if–I just got off the phone with another activist who got like–the ways this kind of high-pressure, high-intensity, high-violence situations create a lot of these things that are just beautiful and just full of solidarity togetherness and all of that. They were specifically talking about Riot Ribs–[Rosa laughs]–and how intense that was. I was just wondering if there’s any anecdotes you can share where you saw something that’s really positive during this that’s unique to your experience.

ROSA: A lot of times, different spiritual groups who all sort of fall under the same mythical path–there’s a lot of separation among them. For example, the Wiccans might not talk to the indigenous witches. You might not talk to, you know, people more interested in Vudu or Santeria, and we’ve had a couple new members who are incredibly gifted and knowledgeable when it comes to their personal craft. Having them be a part of our organization and learning so much about them and their spirituality and what it means to them, along with their personal experiences [of] systematic racism and their everyday life is just beautiful.

I just met an amazing witch who is now a part of us who practices a traditional Hatian blend of witchcraft and I am so incredibly lucky to know this woman. She’s really made quite an–I don’t know–an impression on me and she will go down as one of the best things to come out of this for me personally. I was very lucky. Not only did I meet a sister witch, but I also met a wonderful friend.

LCRW: That’s incredible. I don’t want to make people go into a lot of detail about the really traumatic stuff–any more than they’re willing. So I was hoping I could end on this question. I see in your logo the phrase ‘We hex fascists.’ [Rosa laughs.] So, I don’t want to ramble too much but I was hoping just to ask you about that and about the process and just like–so let me ask it this way: When did you realize you needed to hex some fascists?

ROSA: Oh, it’s a constant process. I think the trick is just making people realize–for me personally, because I can only talk on my own personal beliefs–not the beliefs of the entire group–is that I believe in The Threefold Law; in that you curse someone, it comes back to you threefold times. I, instead of that, ask that these fascists–that these people who are white supremacists, I ask that they understand and that they feel the pain they are inflicting upon others.

LCRW: That’s a really emotionally powerful statement to say, I think. I mean, there’s a lot of people I’ve talked to in Portland over the years that have justifiable hatred and anger and that’s just–a really restrained belief in a way.

ROSA: All I ask of them is for them to really understand and experience the pain that they inflict on others.

LCRW: I think that’s–as a reporter I can’t say I agree or disagree with anything you’re telling me, but that’s really powerful. I’m kind of at a loss as to what to say to that.

ROSA: That’s not to say that we don’t get angry, I have to say. Not to say there isn’t some hardcore hexing going on, but that’s my personal experience as well as those I believe in the circle of our head organizers in all of this.

LCRW: So I guess the last thing I wanna ask–I don’t wanna keep you here all night or day or whatever time it is–I’m not sure–was just like; What other parts of the big picture story of what’s been going on these last few months in Portland–what do you think people are missing? What do you think people in other parts of the U.S.–well, the so-called U.S.–and the rest of the world are missing about what’s going on here?

ROSA: I think that they’re missing the whole context. I think that people think that this is just Black Lives Matter. It’s so much more. It’s fuck ICE, it’s abolish prisons, it’s pay us what we’re worth, it’s the dangers of capitalism, it’s sexual assault awareness, it’s a million things all in one. The system has not been working for us. Every single day we hear about the horrors of what’s been going on–America and the inequality and it’s not working. It’s not working. And this is us standing up for our happiness, our souls, our futures–the futures of our children–hopefully if we can have children after all this teargas­! And that’s–It’s much bigger. It’s much bigger than people think. We’re fighting for the inherent worth and dignity of every single human being. We’re fighting for their rights. We’re fighting for our lives.