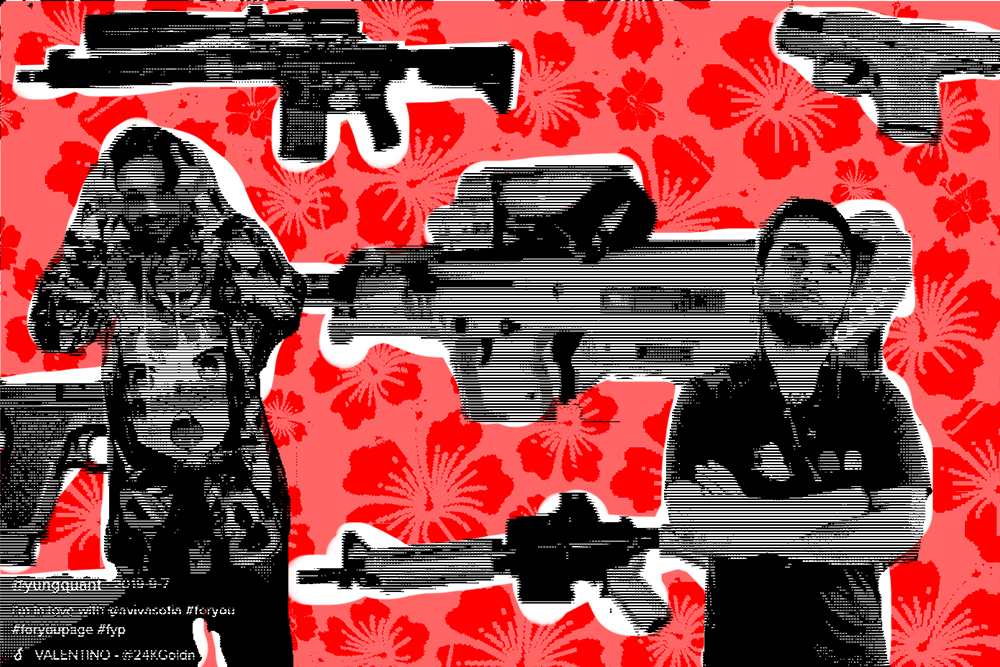 Facts surrounding the March 12th killing of Duncan Socrates Lemp by Montgomery County Police Department’s SWAT team are scarce. The police have their version of events. They claim Lemp was plotting violence, had illegal weapons, had a booby-trapped shotgun shell outside his room waiting for the cops and met them with a rifle in his hands. His family said his weapons were legal and he was murdered in bed sleeping next to his girlfriend. Police, for their part, still haven’t released bodycam footage.

But what no one doubts is that Lemp, a 21-year-old student, software developer, and III% militia associate, became a martyr for the Boogaloo Movement. Boogaloo Boys, the libertarian-presenting, Hawaiian shirt-wearing accelerationist movement based around fetishizing and plotting to start a potential second civil war, started giving their name to reporters as “Duncan Lemp” and making memes about shooting cops in his honor.

Since his martyrdom, Lemp’s actual values and beliefs haven’t been made clear. He was associated with pro-Second Amendment and militia groups, heavily involved in cryptocurrency and fantasized about getting in shootouts with the government. Boogaloo mythos has Lemp as the subject of a tyrannical red flag law enforcement. They say he was murdered by “redcoats” enforcing the pretext for widespread gun confiscation. Lemp is painted by the movement as a bright kid who was murdered in his sleep for working on some sort of encrypted communication structure for Boogaloo Boys to organize on. To add insult to injury, the mythologizing of Lemp goes, MCPD appeared to have conducted this no-knock, pre-dawn raid based off a tip alone, according to a far right alert that circulated on the social media app Telegram.

For Lemp’s supporters, his last tweet on December 31, 2019 is especially eerie.

“The constitution is dead,” Lemp wrote.

However, the tweet to which Lemp is responding complicates matters. Lemp is quote-tweeting 2020 presidential candidate and registered Libertarian John McAfee, who is now facing trial for tax evasion.

“Trump signed an executive order yesterday. Today, if I say, out loud, that Jews control Hollywood, in which 97% of all studio execs are Jewish, I have broken the law. For real. I’m not antisemitic. Replace “Jews” with “Navajos” - it implies the same madness. Wake up America!” McAfee wrote.

McAfee continued in the comment section to lament the fact that “Saying ‘Jews control Hollywood’ is now Hate Speech.” He also made some sort of joke about “bi-racial transsexuals with ADD” and responded to a user asking “What’s wrong with Navajos” with, “The Navajo women have no butts. Ironing board flat in the back. Good hips for birthing and ample breasts but no butt. Pointless.”

The executive order McAfee claimed is tyranny is the extension of Title VI protection to Jews as an ethnic group and religion. The executive order was met with controversy among supporters of Palestinian self-determination, as language advanced within the order deems that “claiming that the existence of a state of Israel is a racist endeavor” is anti-Semitic. McAfee, however, is not speaking out against this executive order as a supporter of Palestinian human rights, or out of protest of Trump’s totalizing and borderline antisemitism when he speaks of Jewish people as whole. McAfee is, simply put, mad that he can’t “name the Jew.”

Lemp’s last tweet, therefore, wasn’t standard Libertarian fare. While Libertarians are almost by default against laws that could infringe on the First Amendment, McAfee was using old and well-known anti-Semitic talking points to attack Trump’s executive order. Lemp was in turn legitimizing that anti-Semitism. In other words, Duncan Lemp was explicitly saying “the constitution is dead” because you can’t criticize the Jews.

Scroll through the archives of sites like 8chan and 4chan and you’ll see fascists ask this question of people who do or say things they like:

“/our guy/” means the person in question secretly holds red-pilled or alt-right beliefs–including subscribing to “Jews control the world”-style conspiracies.

Some fascists did think Lemp one of theirs. An alert shared and reposted around Telegram by a popular neo-Nazi propaganda account the day after his killing states:

“HIGH ALERT, One of the men in our milieu has just been assassinated.”

The post goes on to identify Lemp as “caucasian” and notes that an associate of Lemp describes him as having “frequented the 4chan and Reddit message boards.”

Another Nazi telegram account posted the following day, March 14th, advancing that Lemp was “working on a decentralized forum as well, very interesting that he’d just get shot through the wall while he was sleeping by coward cops.” This was shared once again to another popular Nazi account which shared memes and posts with captions like “Cop killers go to heaven” and “KILL COPS, BOTTOM TEXT.” They also shared one meme insinuating only gay people call the cops.

Social media posts from Lemp’s TikTok, Instagram, and Reddit provide further evidence that Lemp was /our guy/. On February 13th Lemp posted a screenshot of the welcome page for the “Official Site of the State of Appalachia”, a self-described “movement of the people of Western Virginia to break away from Richmond and form our own State.” Beneath the welcome is the phrase “Sic Semper Tyrannis,” a phrase featured on the Virginia state flag. “Sic Semper Tyrannis” was also what John Wilkes Booth yelled before shooting Abe Lincoln and it was used by the Oklahoma City Bomber. It translates roughly to ‘bad things come to tyrants.’ “Tyranny” is kind of the vague buzzword for militia and boogaloo types to describe their enemies.

Lemp’s caption proclaims State of Appalachia is “the tip of the balkanization spear!” and then links the new state of Appalachia’s website which he designed. Balkanization has long been a goal of far-right and specifically neo-Nazi groups and people of the ‘accelerationist’ persuasion. Accelerationists want to make society collapse so they can carve their ideal future out of its ashes.

State of Appalachia shared posts with the hashtag “Occupied Rhodesia”–a reference to the white supremacist apartheid state in present day Zimbabwe. Just as the Proud Boys can’t say Hitler was great so they valorize Augusto Pinochet instead, Boogaloo Boys choose to valorize a white supremacist regime that most Americans don’t learn about in school. But Neo-Nazi accelerationists in the Bowl Patrol, a cult dedicated to Charlotte, NC mass shooter Dylan Roof, often cite Roof’s manifesto, appropriately titled “The Last Rhodesian.” It is a white supremacist dog-whistle–a code meant for other white supremacists to see and recognize amongst themselves but deflect from and deny in public. But no amount of photos of Black Rhodesian soldiers out of context on Boogaloo message boards is going to erase the fact that it was a racist regime.

On February 14th, Lemp posted a screenshot of boogaloo.network, a secure communication apparatus and message board Lemp was allegedly constructing for the Boogaloo Movement. Posts on MyMiltia, “an American Patriot Network” indicated that Lemp was “an active III%’r and looking for local members and recruits.” He additionally appears to have been part of a small online group called the (Area Code) 240 Militia on MyMiltia.

Lemp was likely a frequenter 4chan/8chan’s weapons board /k/. /k/ has strict rules against posting political content, but it’s one click away from the 24/7 hate rally at /pol/, the website’s fascist-dominated ‘politically incorrect’ board. There’s ample evidence of a long-standing radicalization pipeline between /pol/ and /k/. Around the time of his killing, there was a frequently posted image macro going around /k/ and accelerationist Telegram channels depicting a device similar to the alleged shotgun shell boobytrap allegedly set up at Lemp’s residence.

One less-discussed and incredibly grim aspect of “chan culture” is its pedophilia. People on 4chan and 8Chan have long indulged a subgenre of anime erotica called “loli” or “lolitacon.” As one might guess, the subject matter of these images is underage girls. This fetishization doesn’t end with girls drawn on paper. People regularly lust after teenage girls on the chans and have since the beginning. Lemp was no exception.

The Boogaloo movement, it should be noted, constantly memes about putting pedophiles into woodchippers and throwing communists out of helicopters.

Lemp may or may not have had a record of violence with women.

“The police are trying to slander Duncan before they have a press release. Some girl who’s [sic] dad is a cop is claiming he raped her,” Allegheny Rescue Co, a Boogaloo group, wrote on Instagram in March.

LCRW could not find any further evidence of these claims at press time.

But maybe the most damning indication Lemp had fascist sympathies was the fact that he followed unambiguous neo-Nazis. One a TikTok account called “ceoofracism1488.” Ceo of Racism and a linked telegram channel post explicitly vile and genocidally racist content. He also followed an account called “An Appeal to Heaven,” an eco-fascist content creator whose work is favored by Neo-Nazi accelerationists. In addition, Lemp was following an account glorifying the Unabomber and an account called “Blue-Eyed Devil,” whose name is an homage to a white power band.

Duncan Lemp’s killing appears to be for the Boogaloo Movement what Vicki and her son Sam Weaver’s deaths were for the last generation’s militia scene. The Patriot Movement, an conspiratorial militia movement with connections to white power was heavily active in the 1990’s. In 1992, the Weavers were killed in a shootout with U.S. Marshalls trying to arrest Vicki’s husband Randy for sawing off shotguns for an undercover agent. The part of the story the Patriot Movement doesn’t really discuss is the fact that Randy Weaver was a neo-Nazi with ties to the Aryan Nations. Undercover agents were trying to entrap him and turn him into an informant against a terrorist organization.

Duncan Lemp was a man who followed middle school and high school girls online, followed Neo-Nazi propaganda accounts and had neo-Nazis claim he was one of theirs. He and his Boogaloo Boy comrades said explicitly and repeatedly that their goal is to tear the United States apart using massive violence. Boogaloo Boys use Lemp’s killing to provide the pretext to co-opt Black Lives Matter rallies, pretending they hate the police for the same reasons as Black people who are tortured and murdered for no good reason every day. They put Lemp’s name next to George Floyd’s and Breonna Taylor’s next to Vicki Weaver’s. At Black Lives Matter rallies, Boogaloo Boys march around with guns and try to provoke cops to start shooting live ammo so they can fire back. Some even plotted to fire into the crowds of protesters to kickstart their violent fantasy. Duncan Lemp and the rest of his kind want a second civil war–and when you scratch the surface of their beliefs it’s obvious whose side he and they would’ve been on in the first one.