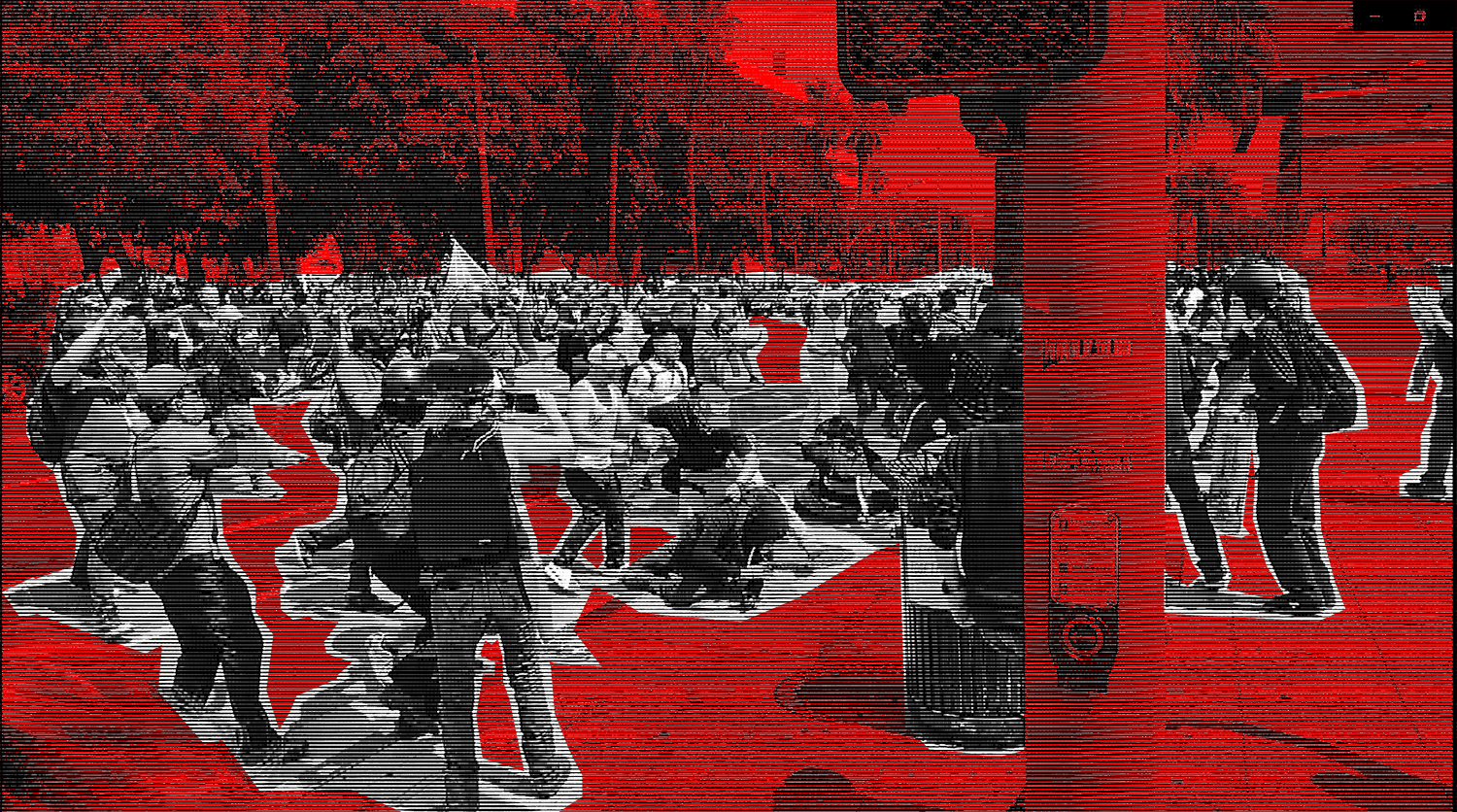 EDITOR'S NOTE : Desertborder (he/him) is a journalist and researcher based in LA. His Cashapp is $FuckGarcetti.

Hundreds of antivaxxers, Proud Boys, Capitol rioters and other neo-fascists rallied in Los Angeles Saturday, attacking journalists and counterprotesters while LAPD looked on. Police failed to intervene to curb the right-wing violence despite the fact the event took place directly in front of their downtown headquarters.

Antivaxx-related violence has been steadily increasing in Los Angeles, as antivaxxers have rallied outside local business, harassing customers and bystanders and frequently getting into fights. At an anti-mask rally in July outside Cedars Sinai hospital organized by Captiol rioter Asefeh Shirafkan, antivaxxers attacked a cancer-patient. Less than a week later, antivaxxers broke four bones in journalist Vishal P. Singh’s face while protesting a West Hollywood restaurant. In both incidents, police failed to intervene in the violence or make any arrests.

Just another day in the bad place pic.twitter.com/s3IUQcXWX9

People are trying to say I started the fight with anti-vaxxers. Fuck you. Here’s what happened. pic.twitter.com/9yT1btCJPi

Antivaxx cultist and failed comedian Jason Lefkowitz was a featured speaker at Saturday’s rally. Lefkowitz organized a series of violent antivaxx protests in West Hollywood, including the protest where Singh was attacked, and told his audience in a livestream that he was pleased his rallies were “making the area unsafe.” Police took no action to stop the rallies, despite Lefkowitz’s admission that he wanted them to be violent.

Among the attendees were Tomas Morales and Ryan Sanchez, two prominent members of Nick Fuentes’s America First/Groyper movement, a mostly college and high-school-aged neoNazi movement. Sanchez, who goes by “Culture War Criminal” online, is a former member of the neoNazi Rise Above Movement and Identity Evropa. Morales live-streamed the event and his videos were boosted by fascist propagandist Andy Ngo.

"What's kind of good about this is that, in my eyes, it's making the area unsafe. And so it's going to hurt the business even more."

Jason Lefkowitz, anti-vaxxer organizer, is on IG live celebrating their violence at Harlowe in West Hollywood, and how they made the area unsafe. pic.twitter.com/7QFVfc6Okz

Emboldened by law enforcement’s permissiveness, antivaxxers assaulted numerous people at Saturday’s LA city hall rally. Police made clear from the beginning of the rally that they were willing to fight on the side of the antivaxxers. As counterprotesters arrived, a small group of militia types, one wearing a shirt that read “American Supremacist” wandered by and threatened counterprotesters, with one of the militiamen screaming a homophobic slur. LAPD officers quickly moved in to protect the militia group.

The militia guys came back and then the cops showed up to protect them pic.twitter.com/nhcJnoAfHr

Counterprotesters stayed a block away from the rally until antivaxxers began threatening and harassing a group of children passing by on skateboards. When counterprotesters moved towards the rally in an effort to protect the children, antivaxxers, including Proud Boys and at least one Capitol rioter, left the park in front of City Hall to confront them, kicking off a melee directly in front of the police station. The first fight was started by Proud Boy Adam Kiefer, who was promptly laid on his ass.

From there, the scene descended into chaos, with dozens of antivaxxers pouring out of the park to attack counterprotesters. At least two people were stabbed in the melee, with one seriously injured, though as of this writing it is unclear who the victims were and who did the stabbing. Numerous journalists were attacked and pepper-sprayed, while one counterprotester was viciously gang beaten and left with a concussion.

Counter protester is savagely beaten by anti-mask/anti-vaxxers, hit several times in the head and then kicked in the head. pic.twitter.com/nh8ys131qF

Among the assailants was Tony Moon, a Capitol rioter who goes by the name “Roof Korean,” a reference to a racist meme advocating the extrajudicial murder of Black people. Moon claims to have participated in the 1992 Los Angeles riots as an armed vigilante defending Koreatown storefronts from looters. Moon, who often posts extreme anti-Black racism on his Twitter account, gained viral fame following a transphobic protest at a local spa in July, when a video of him beating a woman half his size with an orange metal water bottle was widely circulated on social media. Off the strength of the video, Moon gained a large internet fanbase of violent misogynists enthusiastic about assaults on women.

This fascist in a "roof Koreans" shirt, who was chilling with the SS guy, started wailing on a femme. The cops made him put his bottle down but they let him go pic.twitter.com/rS6Qfin6wv

Soon after the video began circulating, Moon was identified as a Capitol rioter. He is unapologetic about his participation in the Capitol riot, and frequently uses his Twitter account to threaten violence against anyone who criticizes him.

#SeditionHunters - the Capitol on Jan 6 was swarming with alt-right D-listers: grifters, streamers, attention-seeking activists along for the coup. Here's another from SoCal, #IamTonyMoon, who posted so much evidence it took a 19-tweet thread for @DianthaSol to list it all! 1/ https://t.co/QGvugQBnHB

During Saturday’s antivaxx rally, Moon carried his signature orange water bottle as he wandered the crowd screaming “unmask them all!” Multiple people in the crowd carried water bottles similar to Moon’s, and responded to his commands by attempting to rip the masks off counterprotesters. A picture of the rally published in the Los Angeles Times shows Moon assaulting journalist Tina-Desiree Berg.

An unidentified man carrying one of the water bottles used it as a weapon in an unprovoked attack, splitting a female counterprotesters’ head open.

An antivaxxer carrying a metal water bottle hit a woman on the head yesterday in an unprovoked attack, leaving her bleeding profusely. The water bottle is of a style promoted by Capitol rioter Tony Moon, who attacked journalist @TinaDesireeBerg yesterday. Video by @andrewkimmel pic.twitter.com/XpEAWXoDh4

Besides Berg, several other journalists were attacked, including LCRW contributor Waterspider, who was pepper-sprayed in a targeted attack by local fascist Benjamin Patino. Patino gained mild fame last year after the FBI investigated his threats to shoot up a school if Biden won the election.

Patino, along with several others, also assaulted journalist Frank Stoltze.

Something happened to me today that’s never happened in 30 yrs of reporting. In LA. ⁦@LAist⁩ I was shoved, kicked and my eyeglasses were ripped off of my face by a group of guys at a protest - outside City Hall during an anti-vax Recall ⁦@GavinNewsom⁩ Pro Trump rally. pic.twitter.com/6s2Jfm8Xrg

Right: Patino later after changing out of the skull mask (which was covered in pepper spray), harassing KPCC reporter @StoltzeFrankly. pic.twitter.com/VilIR7UDaU

Failed filmmaker and violent misogynist Roman Gilbert, who goes by Roman Drake, also attacked journalist Tina-Desiree Berg at the rally. A week earlier, Gilbert challenged local activist Chad Loder to a fight on Twitter and then backed down in hilarious fashion when Loder immediately accepted.

Small-time former MMA fighter Mike Verceles Ancheta (lifetime record: 2-2-0, last fight June 2008) who broke four bones in journalist Vishal Singh’s face at a West Hollywood antivaxx protest several weeks ago, also participated in the violence at Saturday’s rally. Ancheta has not been arrested for the attack on Singh, even though he was identified immediately following the assault.

A closeup photo of the attacker kicking people in the head makes it almost certain that it's former professional MMA fighter Mike Ancheta.

Just two weeks ago, Ancheta attacked journalist @VPS_Reports and broke his nose and both eye sockets. @LAPDHQ has done absolutey nothing. https://t.co/YJ9MQFfHp4 pic.twitter.com/qaG2SXJWtH

As is the pattern in the LA area, police took no action to enforce the law against right-wing protesters, despite the fact the fighting took place directly in front of their headquarters. After anti-vaxxers attacked counterprotesters, police with riot-control weapons moved in to push out the counterprotesters. The police line kept its back turned to the Proud Boys and other far-right extremists, while shouting at counterprotesters to leave the area. LAPD immediately blamed the violence on “Antifa,” though the LA Times notes that characterization is inaccurate and the majority of the violence came from antivaxxers.

Further evidence of LAPD’s affinity for fascist politics is found in their deployment of Sgt. Gordon Helper in a command role at the antivaxx rally.

After the antivaxxers attacked counterprotesters, LAPD moved in to menace the counterprotesters with less-lethal weapons, while taking no action at all against the Proud Boys and Capitol rioters who attacked them. LAPD is filled with open fascists like Helper pic.twitter.com/hhdrlATCyv

Helper is well-known in the LA protest scene for his unabashed use of social media to openly promote his far-right views, and he frequently libels journalists and activists on Instagram and Twitter. LAPD commanders are aware of his behavior, but have so far taken no action against him.

The video labels trans women as biological men or pedophiles. LAPD is endorsing transphobic hate speech in the wake of their violence against pro transgender activists. pic.twitter.com/lvA08e7soF

Mr Helper is entitled to his opinions. He is not entitled to slander a journalist that is an interest to the LAPD. 1/… pic.twitter.com/GUt8uRICNE

The rally was promoted on Instagram by Recall Newsom candidate Anthony Trimino, who recently sold his mansion for $5 million. At least three rallies featuring Recall candidates, including Saturday’s, have devolved into violence—the July 3rd WiSpa protest was promoted by Recall candidate Sarah Stephens, who acted as a getaway driver at the rally after a local fascist hit a journalist in the head with a leaded club. And at a rally in San Diego attended by Recall candidate Larry Elder, members of white-nationalist group Exiled Patriots attacked a group of counterprotesters.